78% of vulnerabilities are found in indirect dependencies, making remediation complex

It is hard to imagine the days of writing software without any open source dependencies. Managing dependencies for a project is an important task, and requires due diligence to correctly keep track of the libraries you depend upon. After all, the application you are deploying bundles your code as well as your dependencies.

Snyk has scanned over a million snapshot projects and has discovered that vulnerabilities in indirect dependencies account for 78% of overall vulnerabilities. This further amplifies a critical need for clear insight into the dependency tree and the need to be able to correctly highlight nuances of a vulnerable path in order to address these vulnerabilities.

Of course, finding the vulnerabilities in a dependency is just the first step. Being able to precisely determine all the paths through the dependency tree in which the vulnerable dependency can be reached is a more complex issue.

Additionally, being able to suggest the steps to take that will eliminate the vulnerability while preserving the compatibility between dependencies is an even greater and much more interesting challenge. 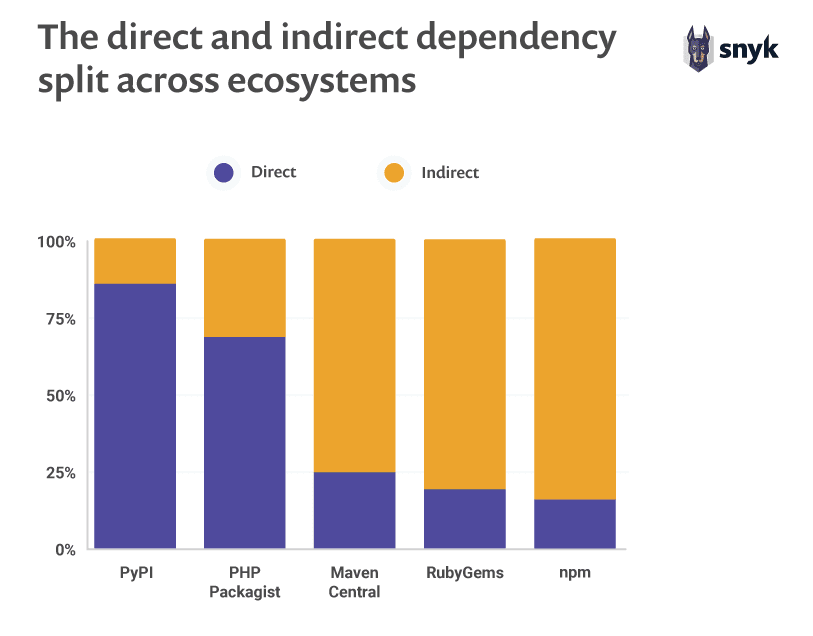 It shouldn’t come as a surprise to most that in this year’s State of the Octoverse report from GitHub, security is the most popular project integration app category with more than one integration for developers. Here’s a quote from industry analyst Gartner in a recent application security report that covers the necessity for organisations to test for security as early as possible in the application lifecycle.

Almost half (43%) of respondents have at least 20 direct dependencies, amplifying the need to monitor for open source vulnerabilities introduced through these libraries

The more we use open source software, the more risk we accumulate as we’re including someone else’s code that could potentially contain vulnerabilities now or in the future. Moreover, risk doesn’t solely reflect how secure the code is but also the licensing compliance of code you adopt and whether that code is in violation of the license itself.

Enterprises should use SCA tools on a regular basis to audit repositories that contain software assets (such as version control and configuration management systems) to ensure that the software developed and/or used by the enterprise meets security and legal standards, rules and regulations. Application developers should have access to SCA tools to inspect the components they plan to use. — Mark Horvath, Hype Cycle For Application Security 2018, Gartner

Application composition is complex. As OS maintainers and developers there are actions you can take to improve the security in projects you own and contribute to.

As an open source maintainer, you should offer secure releases of your code and provide a communication strategy to those consumers in order to positively impact other projects and applications, ultimately benefiting your own projects as well most likely.

As a consumer of open source components, it’s your responsibility to fully understand the direct and indirect dependencies your projects use, including any security flaws that might exist in that dependency tree. Consider adopting the following security guidelines: