Imagine that you installed a random Python package from PyPI. There’s a good 13.5% chance that the package has no licensing information. Considering it’s not uncommon to have hundreds of dependencies and sub-dependencies in a typical Python application, there’s a very good chance of using unlicensed code. Depending on the context, the consequences of using unlicensed software could be anywhere from insignificant to disastrous. Ok, that’s a wild range, so this post will dig deeper into this issue.

PyPI is the most commonly used central repository for Python packages, created and maintained by the Python Software Foundation. It is usually accessed via package management tools, such as pip, to download and install Python libraries and apps. This is similar to package repositories for other languages, such as npm for Javascript, RubyGems.org for Ruby and crates.io for Rust.

Snyk analyzes the dependencies of software projects and finds issues such as security vulnerabilities and bad licenses. To this end, they recently hired me to fetch all of the meta-data from PyPI about packages and their released versions, including licensing information. With this data in hand, I examined the licensing situation for all of the Python packages on PyPI.

Below are some key insights from this analysis, followed by suggestions in light of these insights, and a description of the methods used to obtain them.

How is Licensing in the Python Ecosystem?

First up, here’s a quick disclaimer: I am not a lawyer. I am an experienced software engineer with some understanding of software licensing, but I’m no expert in the field. None of the following is to be considered legal advice, so it is recommended that you consult a lawyer if you need to!

Generally speaking, almost all open-source software licenses can be divided into a few broad categories:

For additional discussion of copyleft vs. permissive licensing, see a previous post on the subject on our blog.

In recent years, several “weak copyleft” licenses have appeared. These are mainly intended for software libraries, allowing their use with fewer or no restrictions on the using software. For more info on the distinction between “weak” and “strong” copyleft, see the Wikipedia article section on the subject.

It is also possible, although not recommended, to not specify any license. This is most often due to oversight or ignorance, but in some rare cases it is done intentionally. Without a license, use of the software is simply subject to copyright law (of each country!), and also other types of law such as patent law.

Let’s take a look at the types of licenses used on PyPI: 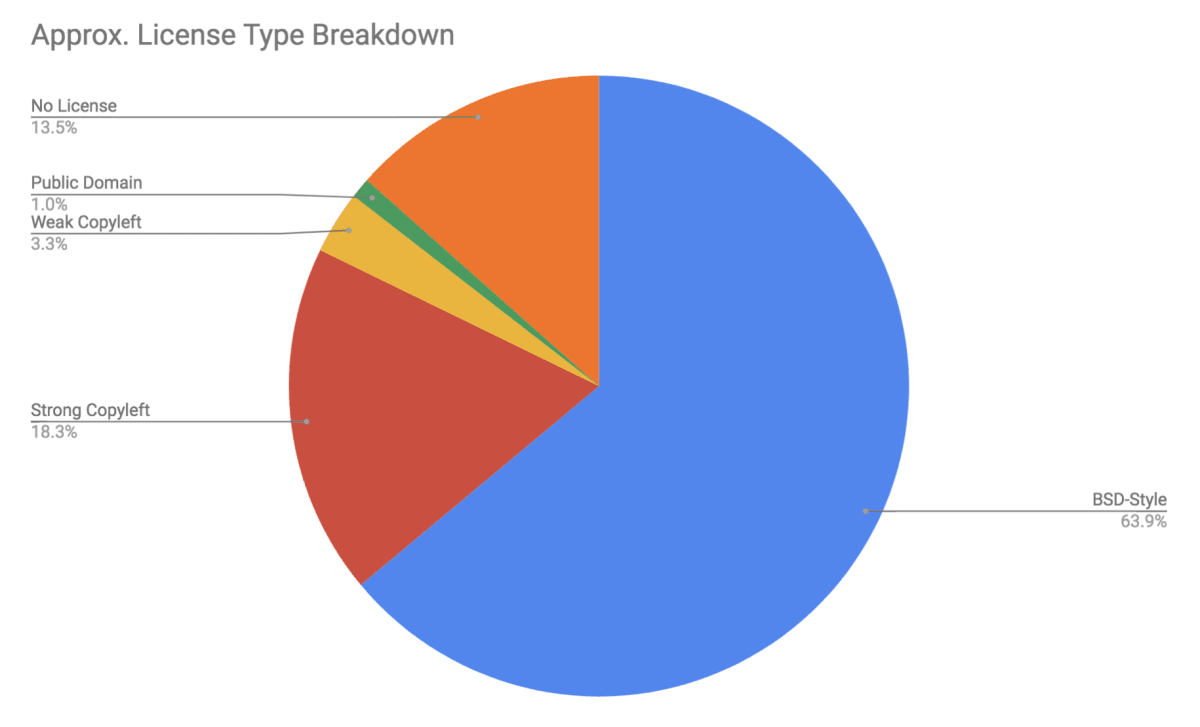 From this data we can see the following:

This is unsurprising, as it is similar to the general trends seen on GitHub and other languages’ package repositories.

Most Common Licenses for Python Packages 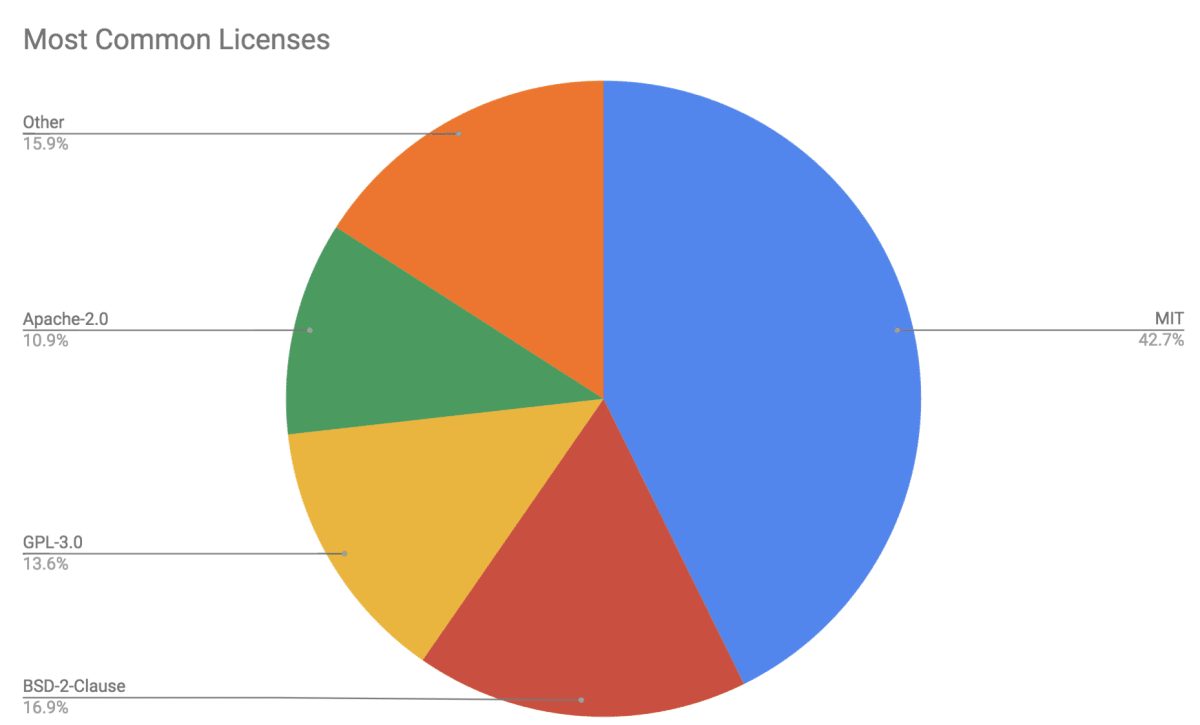 Many other licenses are in common use as well (used by at least 100 packages). Of these, two are unique to the Python ecosystem: The Python Software Foundation license (PSF) and the Zope Public License (ZPL). 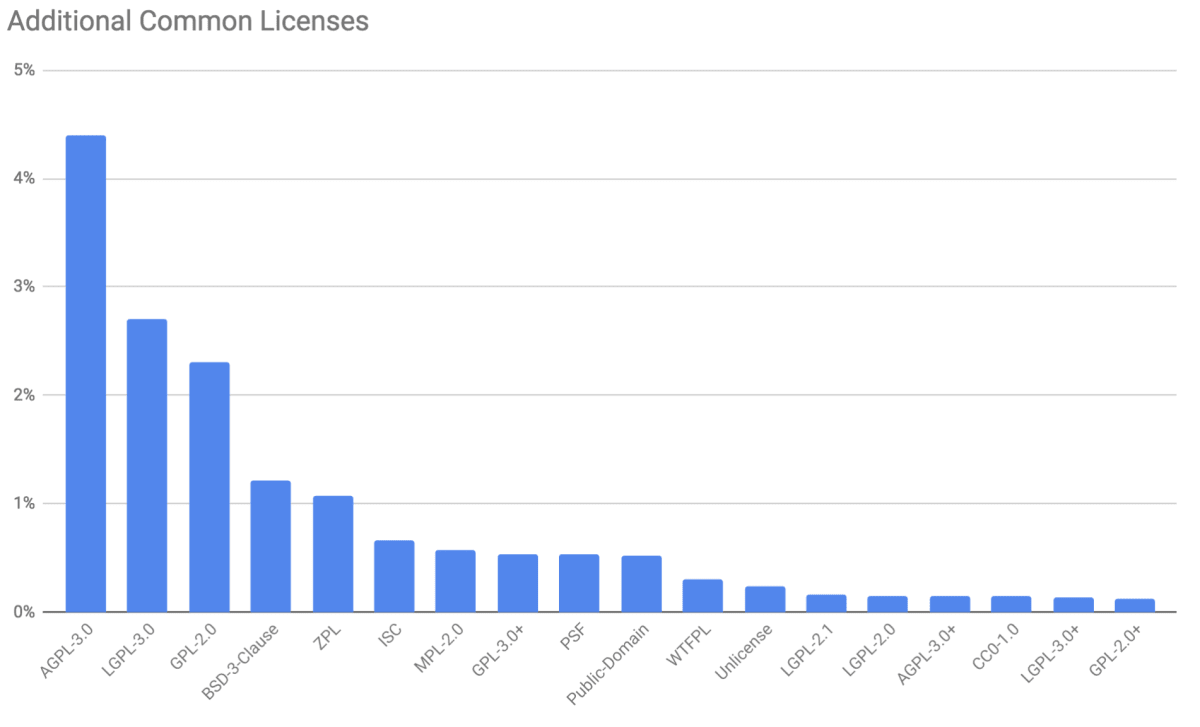 What you should do NOW!

Given the licensing of Python packages on PyPI, I highly recommend the following:

We’ve just scratched the surface; licensing may be more important to you than you realize and you should read more! Consider reading up on the following subjects:

Here are some details on how the data collection and analysis was conducted.

First, I collected the metadata of all packages and all of their released versions on PyPI. This was done over several days in early August 2018. At the time there were nearly 150,000 packages on PyPI.

I then extracted the license information for each version of each package, from both the “license” and the “classifiers” fields. I then aggregated those into a single data structure, with the versions sorted according to a semantic versioning-style interpretation.

Next I cleaned and normalized the licensing data. I built upon on a version of an SPDX license normalizer used at Snyk. I iteratively improved the normalizer to correctly recognize a larger portion of the licenses, followed by manually creating a large mapping of special cases to handle the long tail of exceptional cases.

After this, I set out to analyze the 18% of the packages without a license. I had not yet looked at the files in the releases themselves. I randomly selected 50 license-less packages, downloaded their latest releases and searched for licensing information. After collecting this info, I classified these packages into five categories as follows: 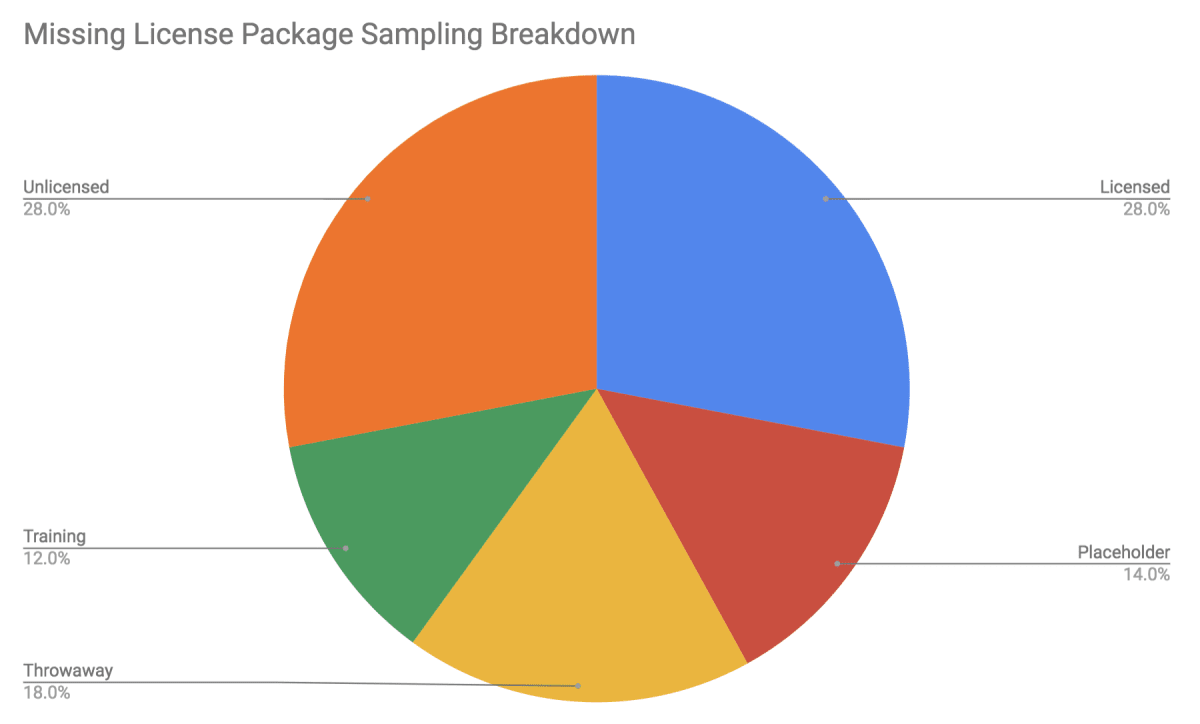 Only those under the “Licensed” category actually have a license. Of those under the “training”, “throwaway” and “placeholder” categories, the great majority did include some code, and could conceivably be used as a dependency, whether purposefully or by mistake (e.g. a typo). Therefore, I found it reasonable to consider these proper unlicensed packages. Extrapolating from this sample, I arrived at the estimation that ~18% × 72% = ~13.5% of PyPI packages are unlicensed.

It is worth noting that I didn’t perform similar analysis for licensed packages on PyPI; it is likely that there are many “training”, “throwaway” and “placeholder” packages that do mention a license. Therefore, taking a conservative stance that only ~18% × 28% = ~5% of the “real” packages on PyPI are unlicensed would likely be severely inaccurate. I did not have the time to conduct such an analysis, unfortunately, so I stuck with the analysis described above.
If you have any questions or comments, I’d love to hear from you! Please reach out to me on twitter at @taleinat.