On July 2nd, 2019, Snyk published a high severity prototype pollution security vulnerability (CVE-2019-10744) affecting all versions of lodash, as the result of an on-going analysis lead by the Snyk security research team.

UPDATE: lodash published version 4.17.12 on July 9th which includes Snyk fixes and remediates the vulnerability. We strongly recommend you update to the latest version of lodash.

The popular npm library is used by 4.35 million projects on GitHub alone. Just shy of 40k GitHub project stars, the library is downloaded over 80 million times each month. Needless to say, a high severity vulnerability in a library as popular as lodash affects a large proportion of npm users.

The news of this recent lodash security vulnerability has come to light after only three months since we reported a similar protoype pollution vulnerability in the ever-popular jQuery JavaScript frontend library.

Similar to other prototype pollution vulnerabilities ([1], [2], [3], [4], [5]), an implementation of unsafe recursive JSON merge may result in being able to tamper with JavaScript’s Object which influences other data-types through the prototype chain. The implications of such vulnerabilities can range from property injection to code injection and denial of service, depending on the affected use-case and whether this vulnerability can be exploited.

We have already added the vulnerability to the Snyk database, and if your project is being monitored by Snyk and proves to contain the vulnerable package, you will have already been notified by our routine alerts. If not, you should test your application code repository, to see if it is affected by the vulnerable lodash version.

The function defaultsDeep could be tricked into adding or modifying properties of Object.prototype using a constructor payload. Following is an example of how this vulnerability will impact a JavaScript application:

After covering the basics of prototype pollutions, we can refer to the actual security fix that Snyk’s engineer Kirill had PRed to the lodash JavaScript library repository on GitHub at https://github.com/lodash/lodash/pull/4336/files: 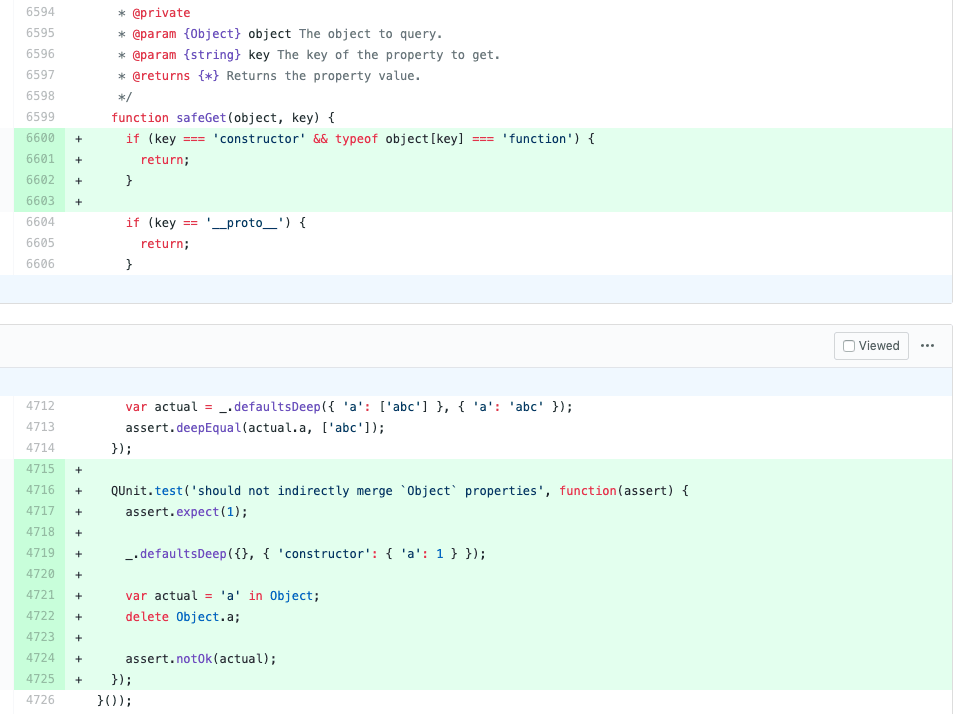 The fix includes a safety check to ensure that we’re not polluting the global object based on a key that is set to constructor. A test case is also added to ensure no future regressions occur.

Is your JavaScript or Node.js project vulnerable?

What should I do

Snyk creates patches for high impact vulnerabilities, such as the case with lodash that affects millions of projects across Node.js and JavaScript ecosystems. All patches are tested rigorously in a process that ensures they apply well on supported versions of the affected library.

More in-depth review of Snyk patching process is on our documentation page at Fixing vulnerabilities and this blog post about Where do security vulnerabilities come from? from Danny Grander, our Chief of Security.

Note: When an official version of lodash is released that contains the fix to this vulnerability, Snyk monitored projects (whether currently patched or not) will automatically be sent a PR with the official library upgrade.

Through the security research conducted by the Snyk team in April, 2019, this and further security vulnerabilities affecting lodash were responsibly disclosed to John Dalton, maintainer of lodash.

The process included a collaboration with John in a private repository to confirm our findings and Snyk’s proposed fixes to remediate the vulnerabilities. Involved in this process was Kirill, one of Snyk’s software engineers, who raised pull requests ([1], [2]) with the fixes to lodash, both of which were merged on June 24th.

We’d like to give John a lot of credit for being so responsive and welcoming our assistance throughout the resolution of this security issue.

If you think you found a possible security vulnerability within Lodash, you can discuss this issue with us through our Vulnerability Disclosure program. More information can be found here https://snyk.io/vulnerability-disclosure/