JVM Ecosystem report 2018 – About your Platform and Application

15. Which cloud platforms do you use?

From our data, we can say that 57% of respondents use a cloud platform of some sort.

If we consider only the set of respondents who do use cloud platforms, we can see Amazon Web Services (AWS) leading the pack with almost two-thirds of the votes. Microsoft Azure and the Google Cloud Platform are next, taking 18% and 20% respectively; and Red Hat OpenShift and Oracle Cloud are making inroads. 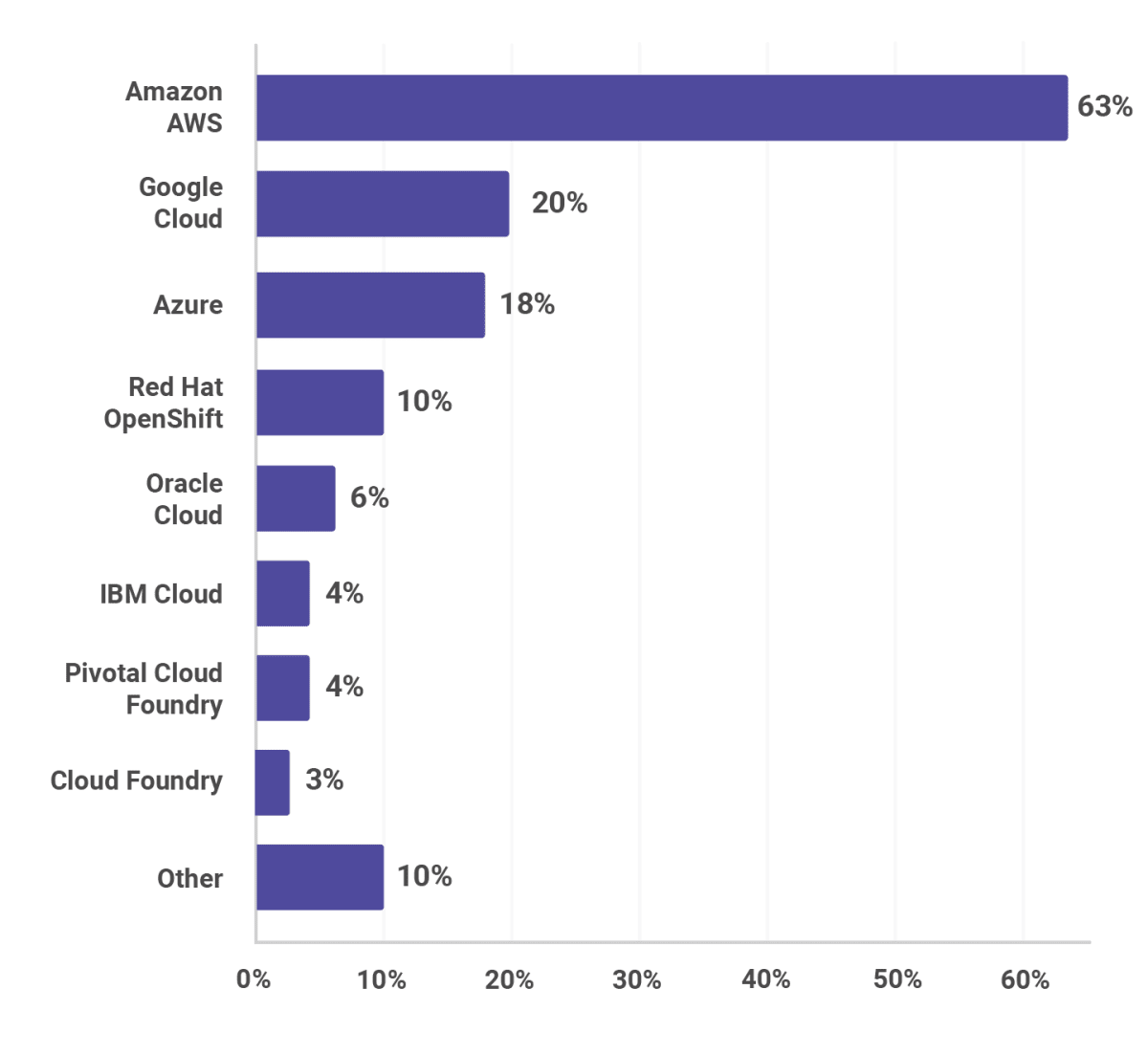 16. Which cloud approaches do you use?

Containers lead the way on 43%, while VMs stay in the game pretty at 33%. As a relatively new technology, Serverless/Fass comes in strongly, with almost 1 in 10 respondents adopting this approach. PaaS, which has been around a lot longer, sits on a similar split at 10%. 1 in 3 respondents don’t use any cloud approach at all. 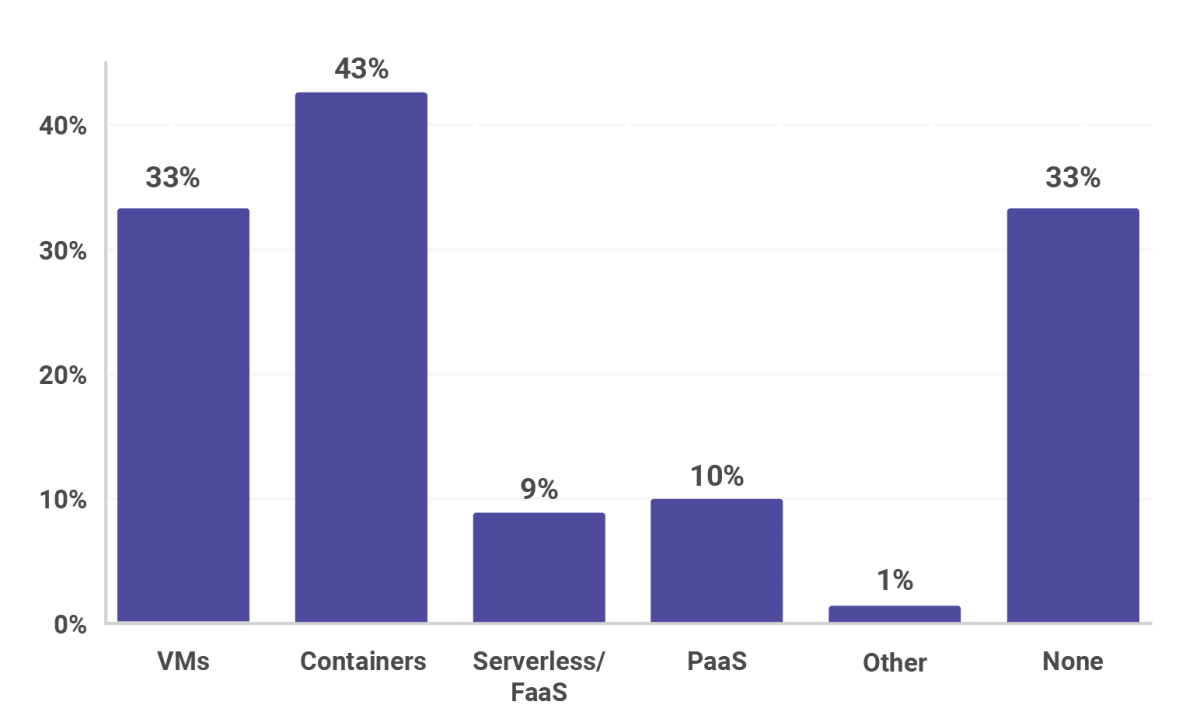 17. Which continuous deployment or release automation tools do you use?

Almost 1 in 2 respondents don’t use any continuous deployment or release automation tools whatsoever. This might even be higher, as almost 1 in 5 don’t have any idea which tools are used in CD or release automation. It’s somewhat surprising to see bash as popular as Chef and Puppet. Actually, whom are we kidding?–Everyone loves bash! Ansible is the leading CD tool at 16%. 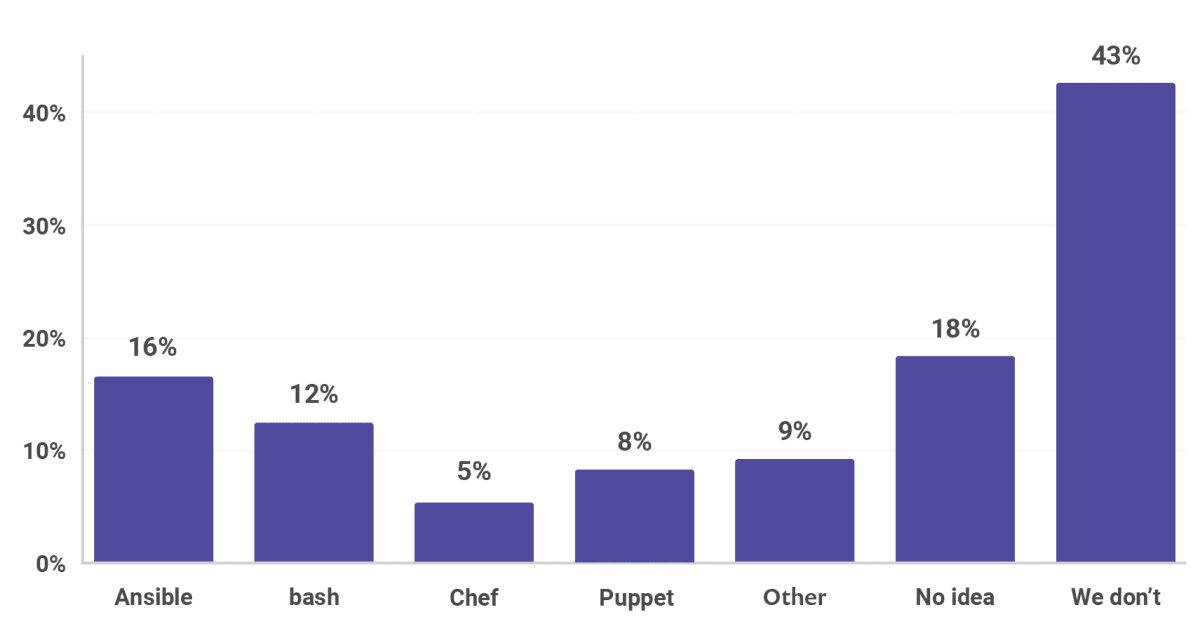 18. Which other (non-JVM) languages does your application use?

In today’s polyglot world, it would be naive to assume that JVM languages are the only languages used in JVM apps. In fact, more than half of JVM applications use front-end JavaScript as well, 1 in 5 use Python, and almost 1 in 4 use Node.js. As you’d expect, many projects use SQL as well. 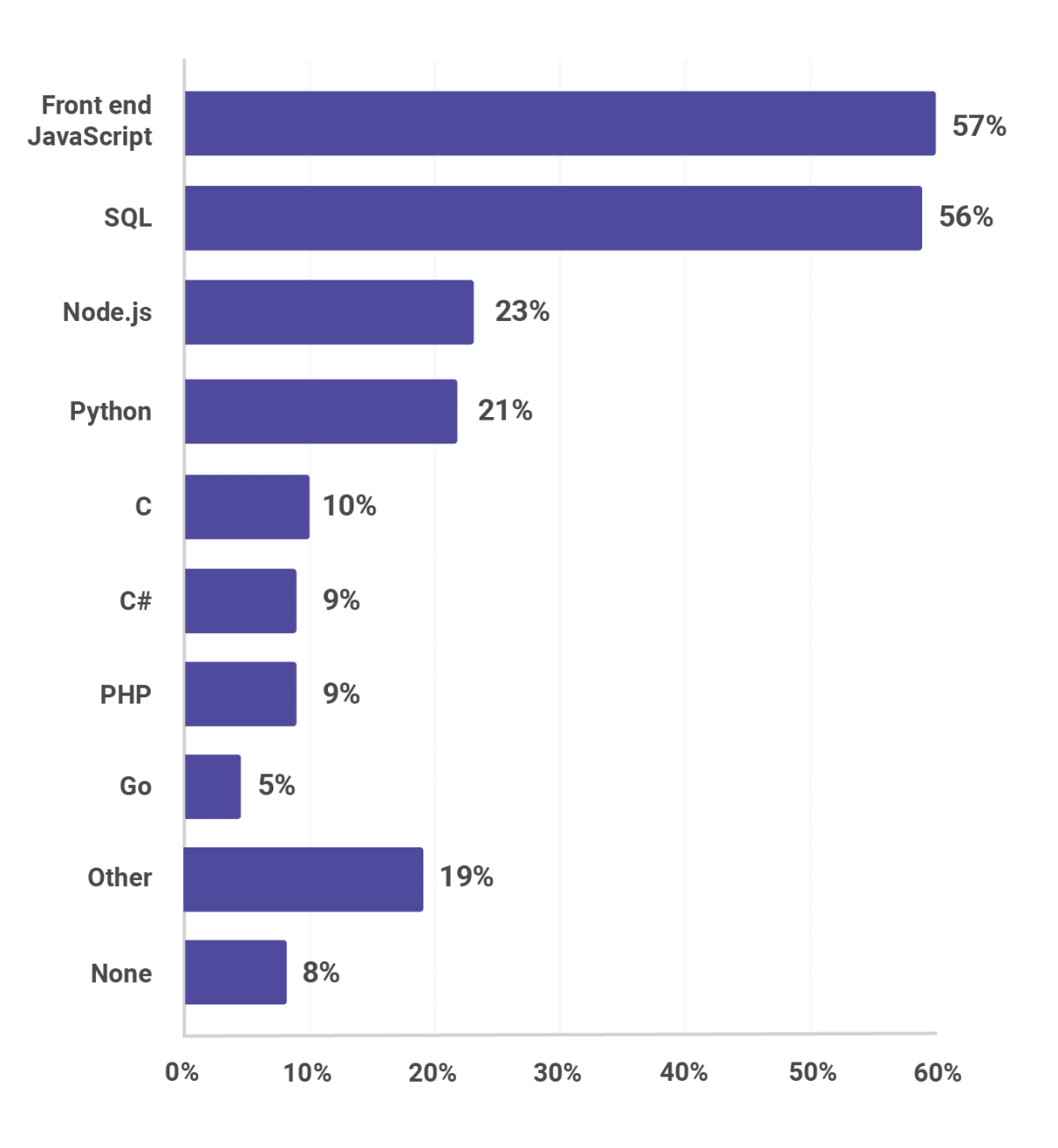 19. Which Web Frameworks do you use?

Few words can better express the Spring domination in the Java ecosystem than this graph. With 4 in 10 developers using Spring Boot in their applications, it’s interesting to see it has overtaken the Spring MVC framework for the first time. JSF is the closest entrant with a respectable 19% and Struts, despite a constant stream of Remote Code Execution vulnerabilities in the news, is a strong fourth with almost 1 in 10 developers adopting it. More than 1 in 5 developers likely boast about how small their applications are, not needing a web framework at all. 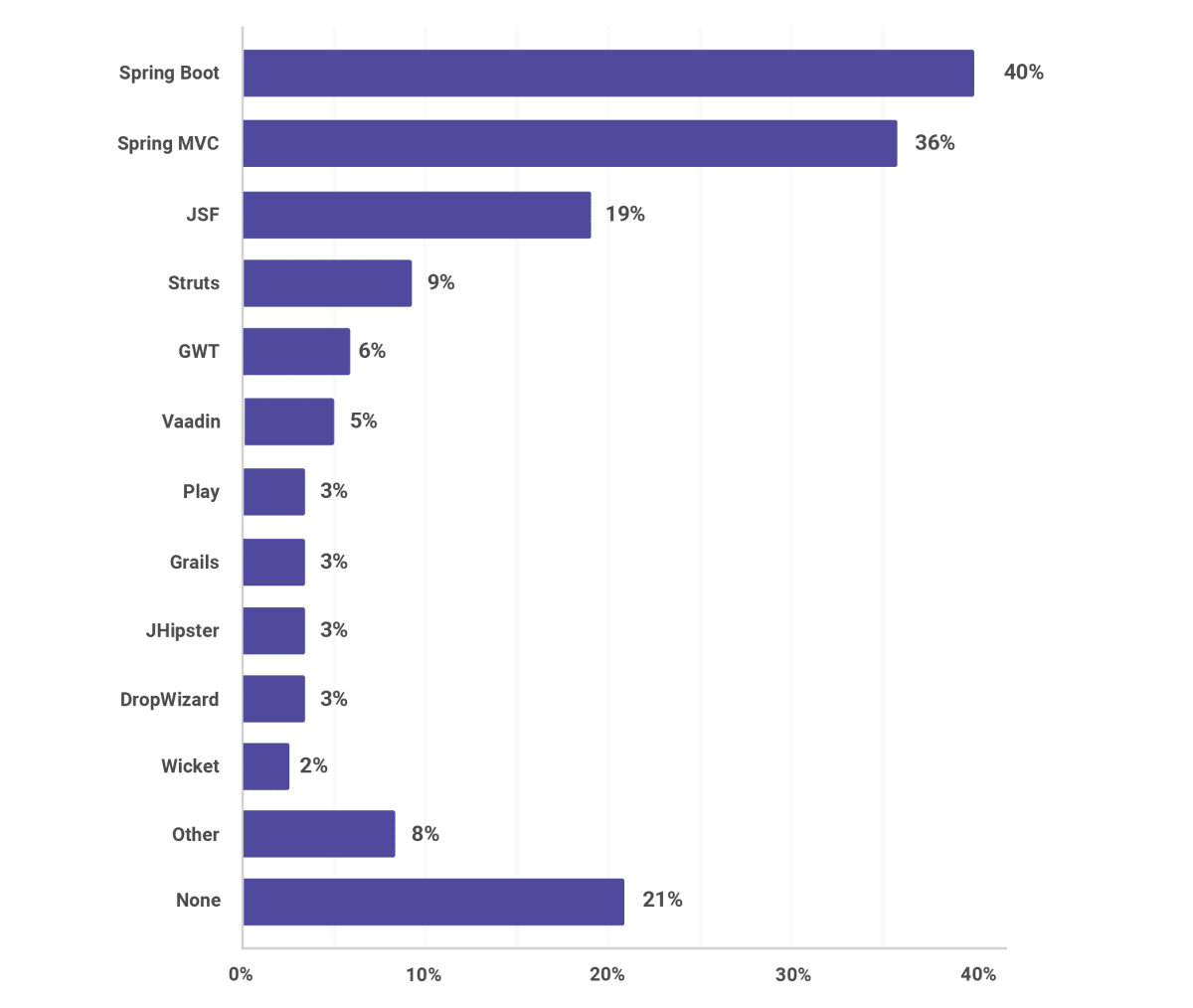 20. Which ORM frameworks do you use?

More than 1 in every 2 developers use Hibernate in their applications. Almost 1 in 4 developers are happy with plain old JDBC, and Spring developers of course have the option of using Spring JDBC template, which is used by 23%. 1 in 5 developers don’t use any ORM framework whatsoever to access their data. (Developers could choose more than one answer, so totals do not equal 100%). 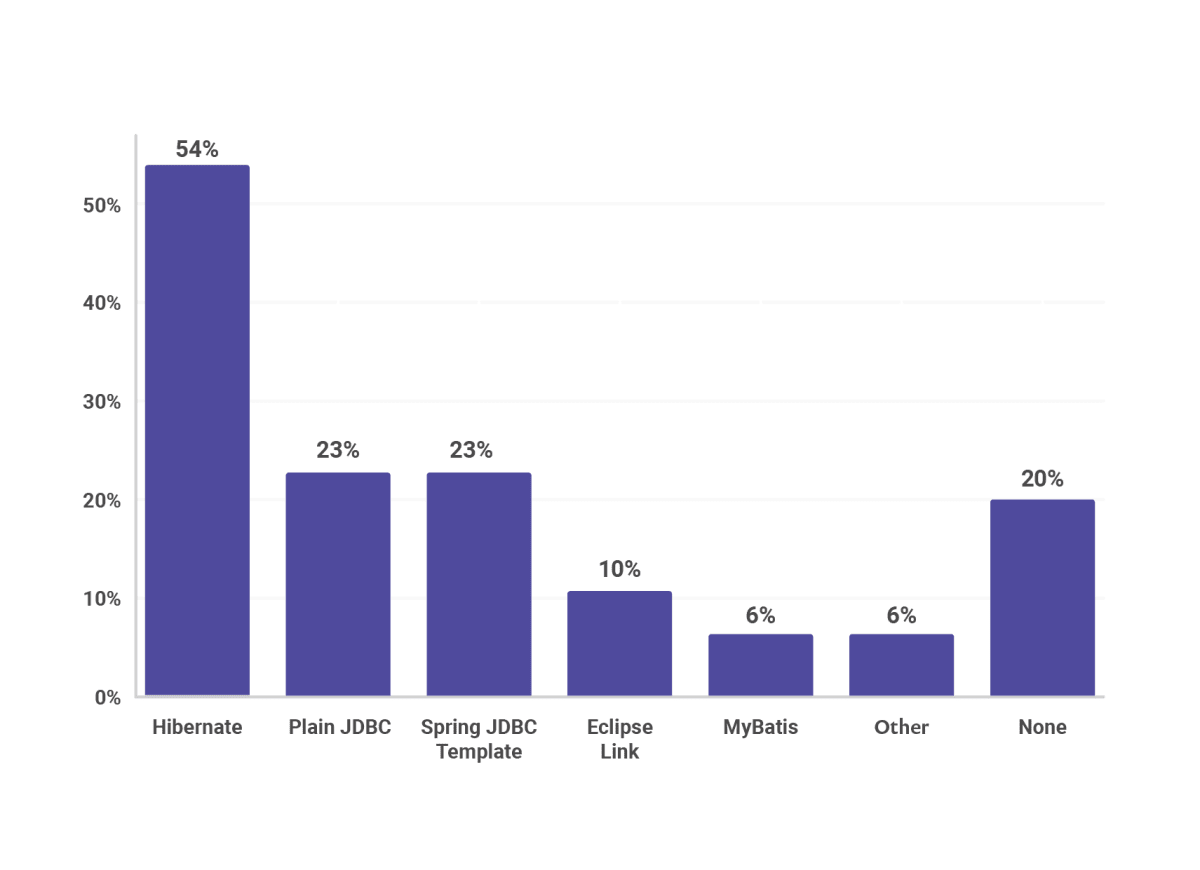 21. Which database do you use in production?

Once again, Oracle Database takes the top spot with almost 3 in 10 applications using it in production. MySQL and PostgreSQL are strong competitors taking 21% and 20%, respectively. MongoDB is the highest NoSQL database in use, with 5%. 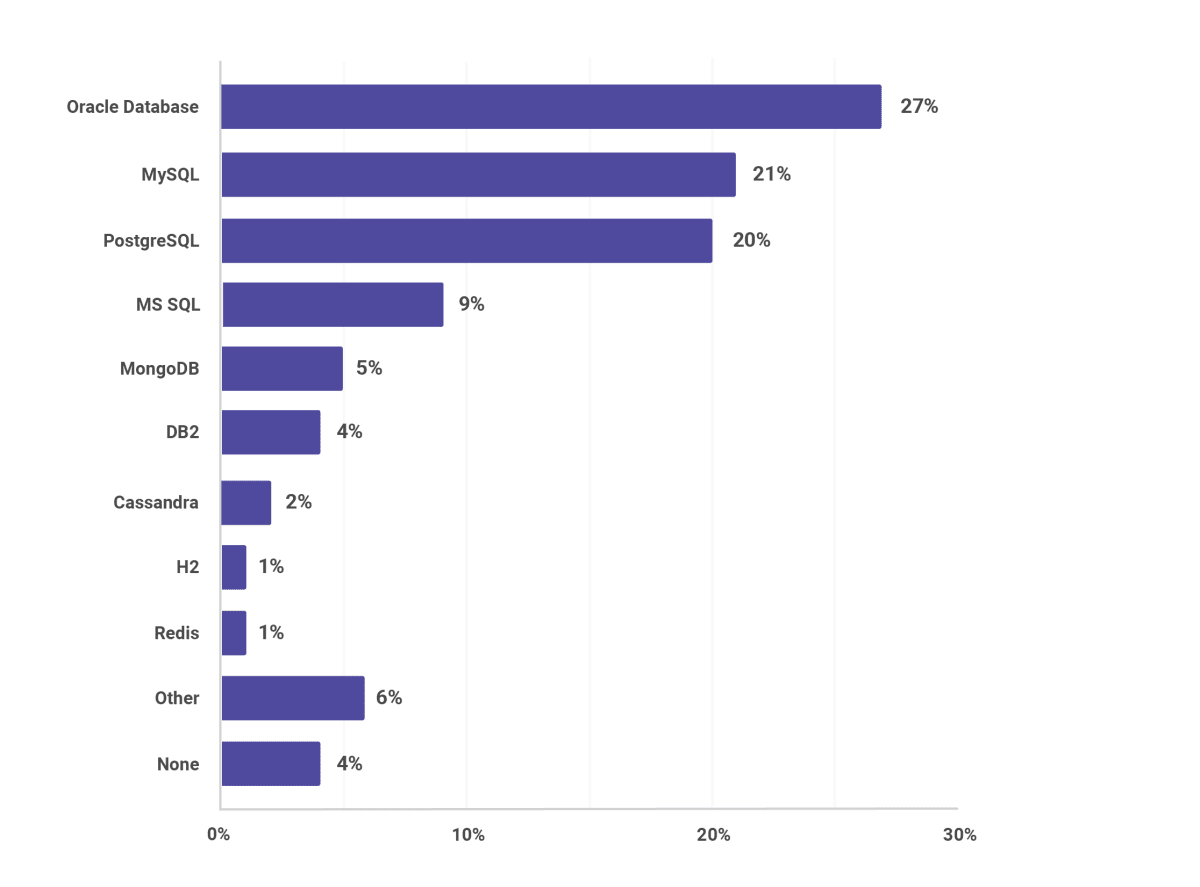 22. Which application server do you use in production for your main application?

More than 4 in 10 respondents use Tomcat as their application server of choice. The fast, lightweight, open source, community favorite has led the pack for a long time now, and it doesn’t look like that’s going to change any time soon. JBoss and Wildfly are not too far behind at 15%. In the larger enterprise app server category, WebLogic has a slight lead over WebSphere. The “Other” category contains TomEE and Liberty Profile at 1% each, which lead that group. 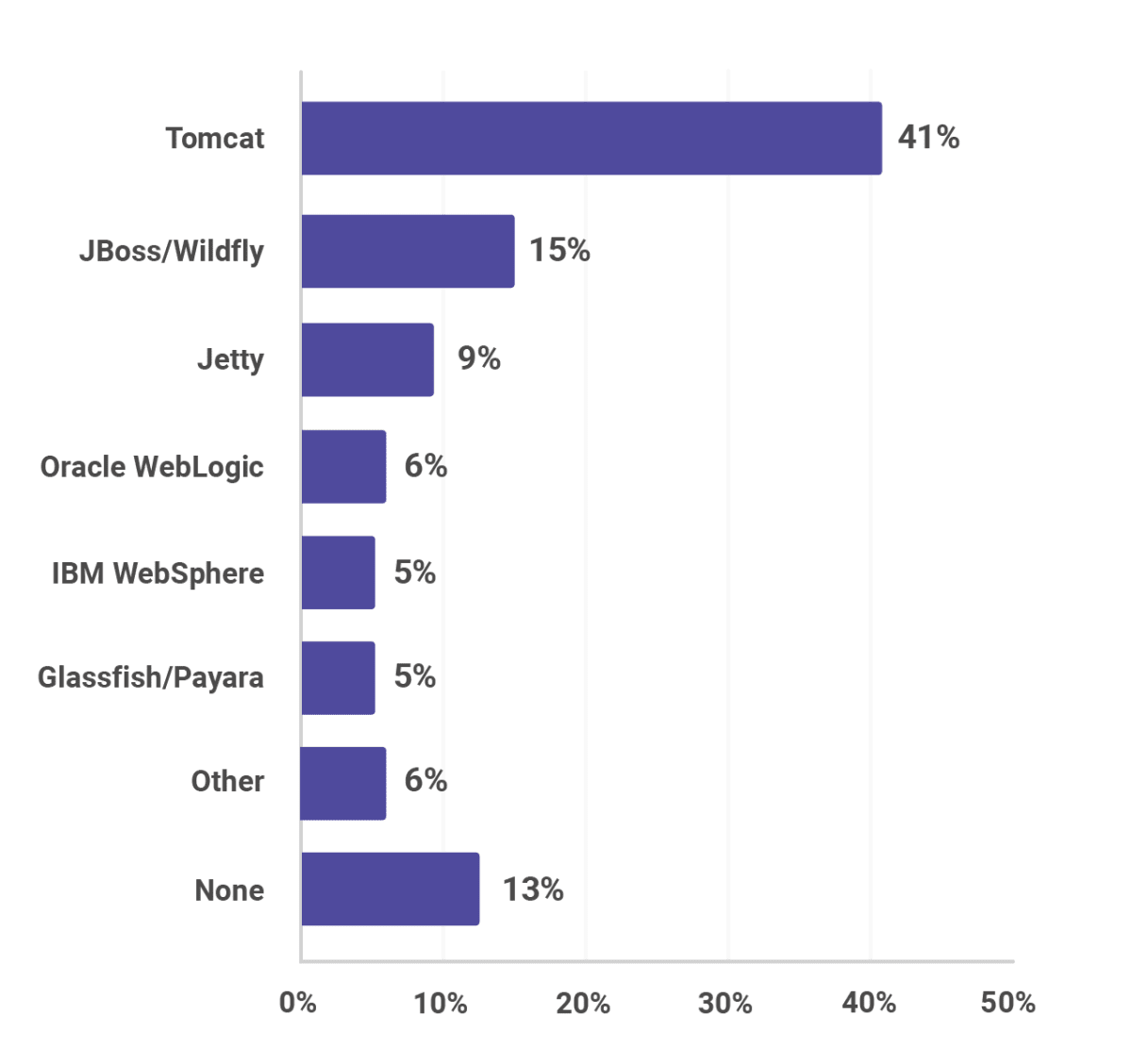 23. Do you develop on the same application server you use in production?

Despite the obvious dangers, more than one-third of respondents develop on a different server from the one they use in production–trading the possible cost of failures for the convenience. Surprisingly, those who state they use different application servers (or none) in development, actually have a wide variety of apps and servers in production. We were expecting mostly the larger monolith-suited app servers that could cause developers pain to use locally, but the ratios were comparable.

24. How many open source (direct) dependencies does your main application have?