Today we’re releasing the Serverless Snyk plugin—a plugin for the Serverless framework that helps you to prevent vulnerable packages in your application, using Snyk!

In a Serverless environment, outdated server binaries are no longer the most glaring security risk. By offloading the management and maintenance of the server to dedicated and professional teams, that risk is greatly reduced. Instead, open-source packages become much attractive to attackers as their vulnerabilities are well known, prevalent (we published 23 new Node.js vulnerabilities in October alone), and difficult to control from a development perspective. 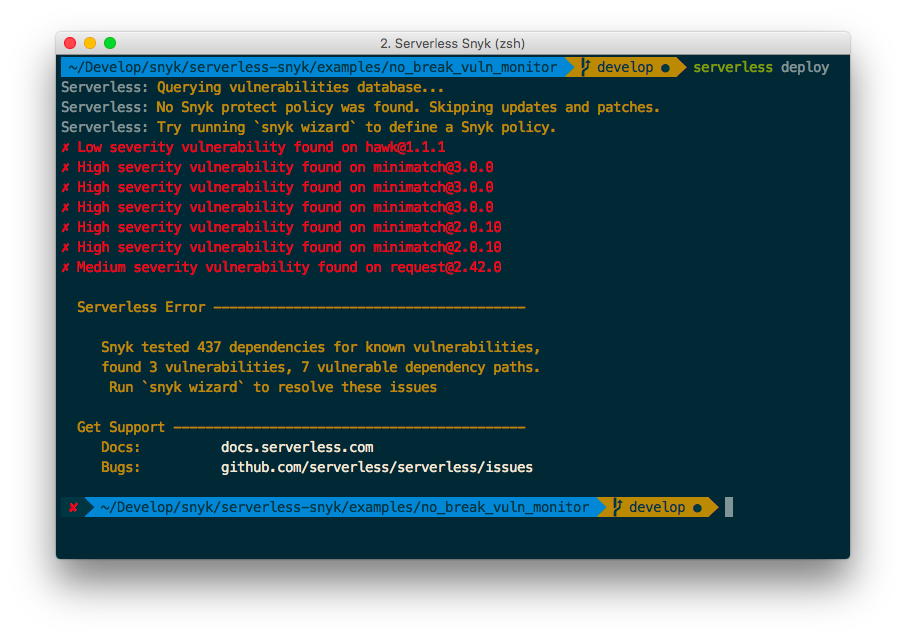 The Serverless Snyk plugin seamlessly fits into your Serverless workflow, adding Snyk protection into the deployment process. Everything you’ve come to expect from Snyk—scanning for known vulnerabilities, applying patches and upgrades, and monitoring dependences for proactive alerting of new vulnerabilities—can be automatically run each time you deploy.

Setting up the plugin

You can install the plugin in your Serverless app by running

npm install serverless-snyk --save.
Serverless handles configuration through a
serverless.yml
file, where you’ll need to add the plugin as well:

With those two steps, the Serverless Snyk plugin is ready to start testing your application on each deploy.

Testing, though, is just the start. If you have a .snyk policy file (either thanks to the GitHub integration or from running snyk wizard),

Serverless Snyk will automatically apply any stated upgrades and patches on each deploy.

You can also take a snapshot of your dependencies with each successful deploy if you include your API token (found in your dashboard when you sign up) in your Serverless application. (The API token also will help you avoid any API rate limits.)

The repository for the plugin includes step-by-step documentation, as well as information about configuring the plugin.

With the Serverless Snyk plugin automating away the risk of known vulnerabilities in your dependencies, you’ll be free to focus on building your application. We can’t wait to see what you come up with!