The PyPI package PyHand-Earth receives a total of 1,555 downloads a week. As such, we scored PyHand-Earth popularity level to be Small.

Based on project statistics from the GitHub repository for the PyPI package PyHand-Earth, we found that it has been starred ? times, and that 0 other projects in the ecosystem are dependent on it.

We found a way for you to contribute to the project! Looks like PyHand-Earth is missing a security policy.

A security vulnerability was detected in an indirect dependency that is added to your project when the latest version of PyHand-Earth is installed.

Further analysis of the maintenance status of PyHand-Earth based on released PyPI versions cadence, the repository activity, and other data points determined that its maintenance is Inactive.

An important project maintenance signal to consider for PyHand-Earth is that it hasn't seen any new versions released to PyPI in the past 12 months, and could be considered as a discontinued project, or that which receives low attention from its maintainers.

Readme
Yes
Contributing.md
No
Code of Conduct
No
Contributors
0
Funding
No

PyHand-Earth is a Python-based software project that incorporates and integrates multiple high-performant concepts, libraries, tools, and techniques to optimize and maximize user experience in navigating the Google Earth Pro Desktop application relying only on simple hand gestures and an ordinary Webcam.

As a programming language, Python owes much of its popularity to its predilection for rapid deployment and to the ever-growing ecosystem of third-party open-source libraries and tools that add scalability, thereby freeing up precious time to more directly focus energies on solving the problems around us. Yet, that type of flexibility comes with a price - which is paid in the currency of performance. However, there is no shortage of high-performant tools and libraries that leverage all that Python has to offer with the inherent speed of these optimized solutions, many of which are written in high-performing languages such as C++.

Despite advances in computer vision and deep learning neural networks, there are not many open-source software deployments that advance hand-gesture recognition in any appreciable direction towards the kinds of user interfaces depicted in movies such as those in the Marvel universe ... think Tony Stark navigating a holographic interface. Those that do exist seem to require the use of special hardware that includes depth sensors (e.g., Microsoft's Xbox Kinect and ultraleap's Leap Motion controllers).

This project serves as an attempt to take a first step towards user interfaces of the future but without having to rely on such specialized hardware.

For a smooth experience, users should review the following special comments, which include important instructions, tips, and suggestions.

This project's installation package, and its dependencies, is hosted on PyPI at:

The following third-party packages automatically will be pip installed as part of the PyHand-Earth package pip install (as described further below):

Apt-get packages that must be independently installed due to required dependencies:

Although the libraries listed above that provide high-performant optimization all can be pip installed, there are unavoidable dependencies that the user must apt-get install in order for these libraries to coexist. (Prior approvals have been obtained from J.B.).

The apt-get install commands that the user must execute from the command line for a proper PyHand-Earth installation are as follows:

(required in order to start PyQt, which is pip installed)

(necessary to be able to manage certain windows)

As documented at the PyPI repository page for PyHand-Earth, after the required dependencies described immediately above are installed, the software package can be installed from the command line with the following pip installation command:

Except as mentioned further below, this will install all the Python code developed for the project and third-party optimization libraries, as discussed previously above.

Once everything is installed, from the command line, simply run the following command to execute the PyHand-Earth program:

As previously stated above, if you do not have the Google Earth Pro desktop application already installed on your local machine, the first time you run PyHand-Earth, the program will install the .deb package for Google Earth Pro. In addition, it automatically will download from a google drive link a Keras .h5 file where the training model for the hand gesture recognition neural network is stored. 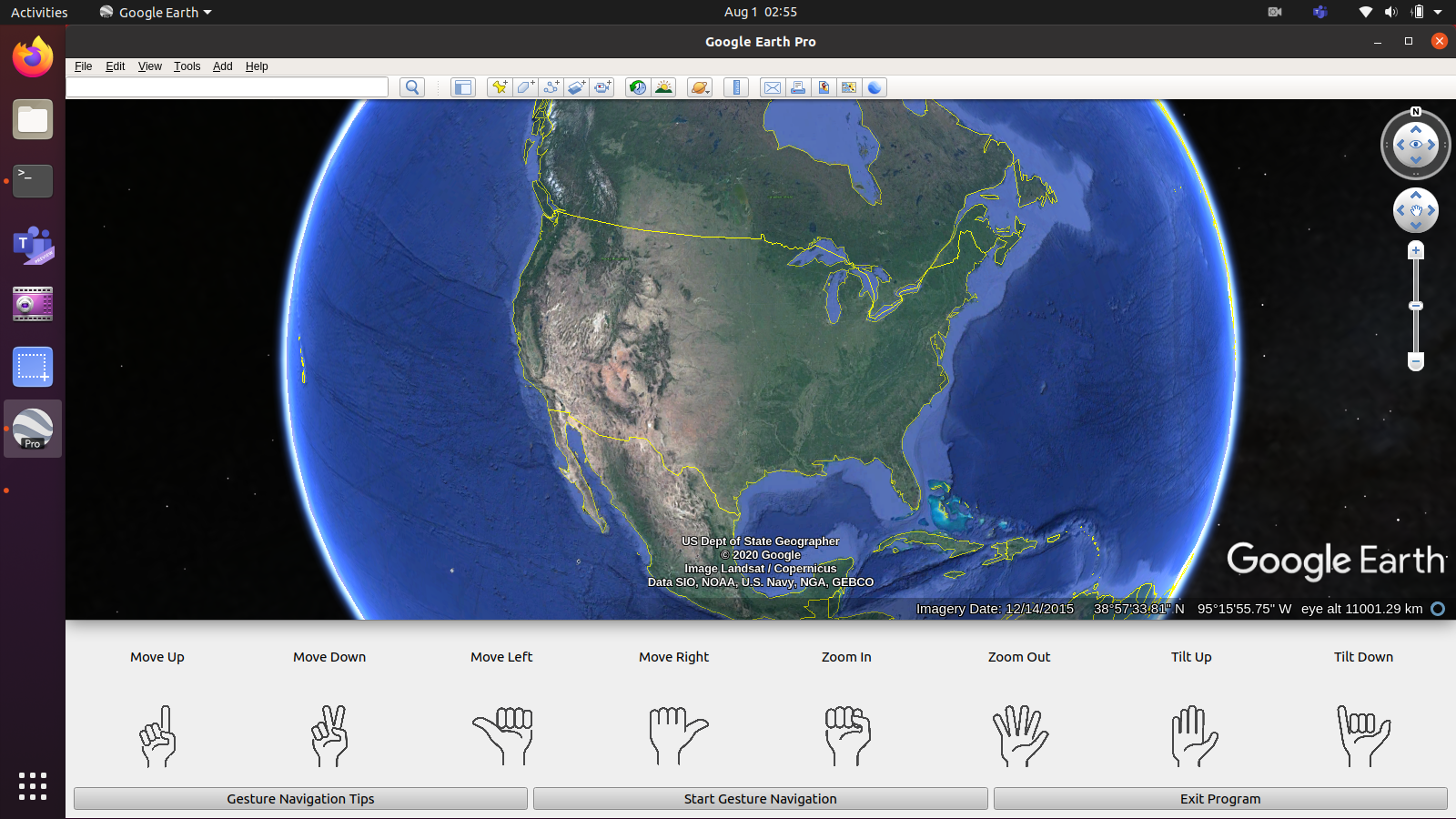 After launching the PyHand-Earth program, the user's initial view consists of the top portion of the display being filled by Google Earth and a smaller area at the bottom of the display featuring a graphical legend of eight hand gestures, as well as three user buttons.

Tip: In the event Google Earth Pro launches a "Startup tips window", the user should close this window before proceeding. Notwithstanding, in the event you forget to do so, you will be prompted at the appropriate time with a warning message.

The eight hand gestures, together with a blank wall (i.e., no hand gesture), and their corresponding navigation motions on Google Earth, are as follows:

For a smooth experience, you should take a few moments to familiarize yourself with these hand gestures and their motions.

Below the hand gesture icons, the user is presented with three buttons. Clicking on any of these three buttons with the mouse will have the following functionality:

Upon starting gesture navigation, an orange bounding rectangle is visible in the live Webcam video window. By placing your right hand in the window and forming one of the eight gestures, you will be able to navigate Google Earth Pro. One of the interesting features of this functionality is that Google Earth Pro's API was deprecated years ago, and so all navigation control is performed by optimized, threaded Python code.

Tip: As mentioned previously, due to the physical limitations of ordinary Webcams, the prediction model works best when you have behind you a blank, light-colored wall.

To the left of the orange bounding rectangle, the neural network's prediction values for each of the motions (gestures) is displayed in text to the user (for academic evaluation purposes).

Tip: In the event the prediction gets stuck on the wrong motion (gesture), simply shake your hand for a moment to allow the prediction to reset until the desired motion is achieved.

Tip: If you remove your hand entirely so that the only thing in the orange bounding rectangle is a blank wall, all navigation and motion should stop. 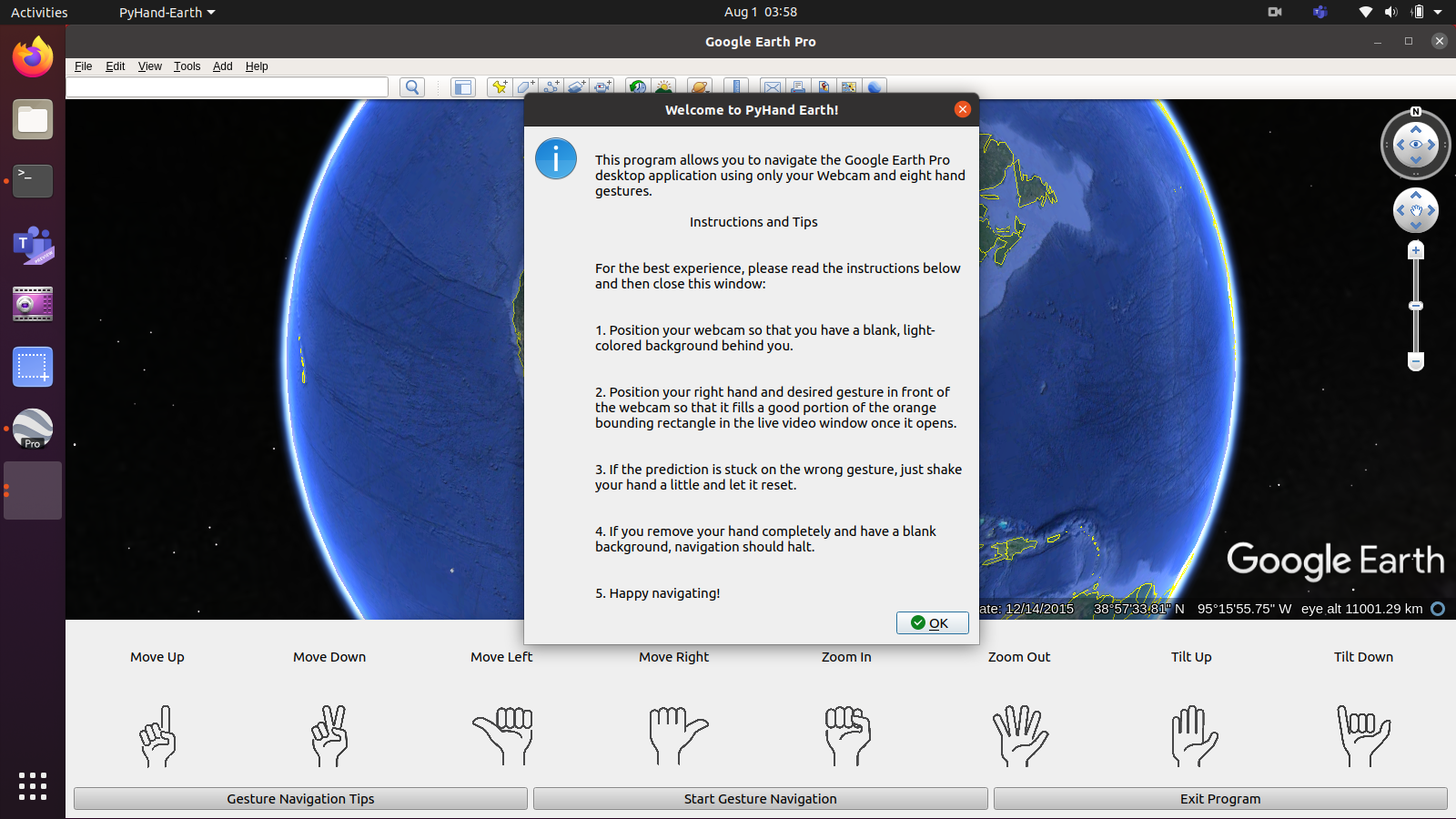 Gesture navigation with index finger pointing up - Move Up 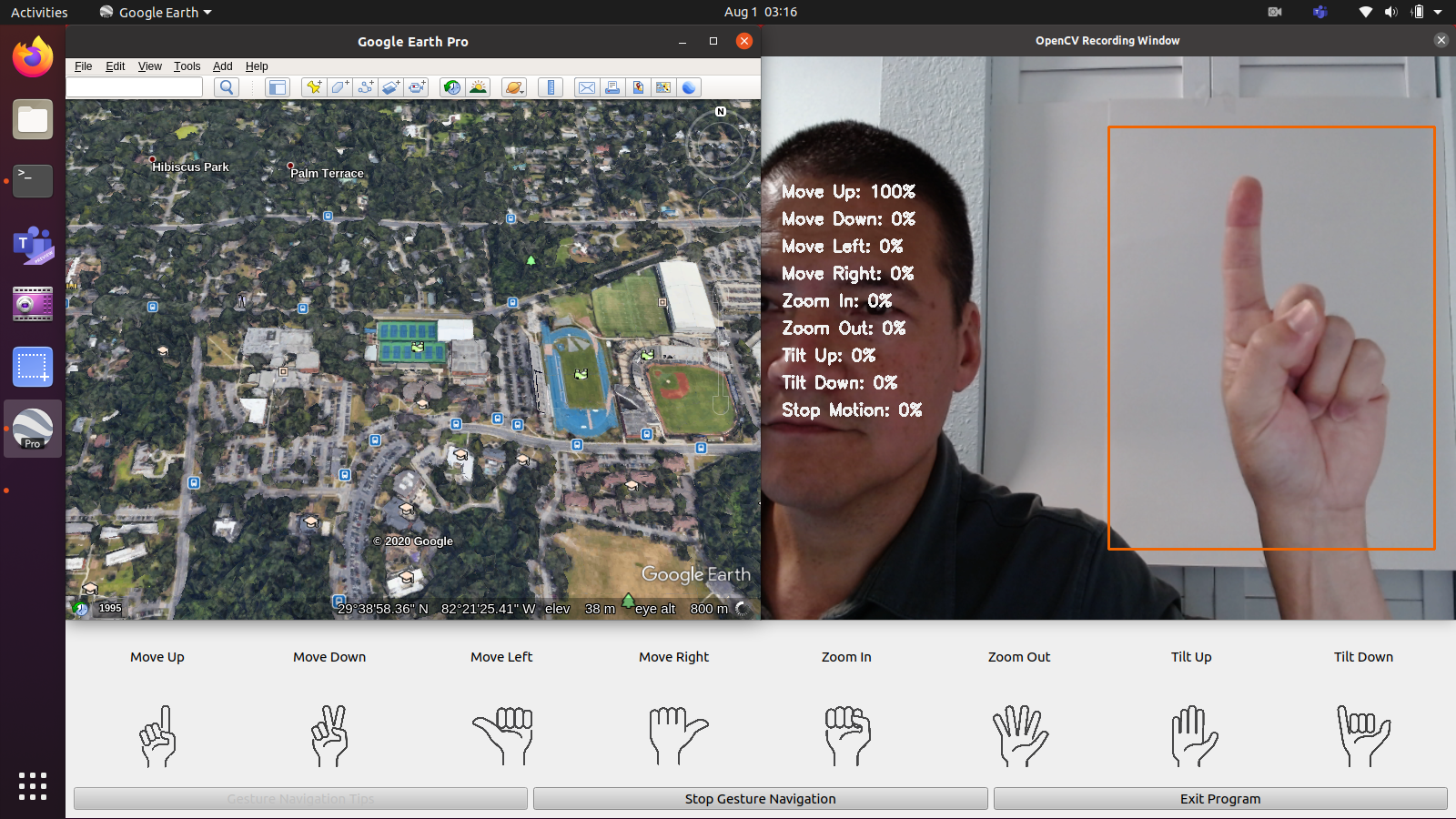 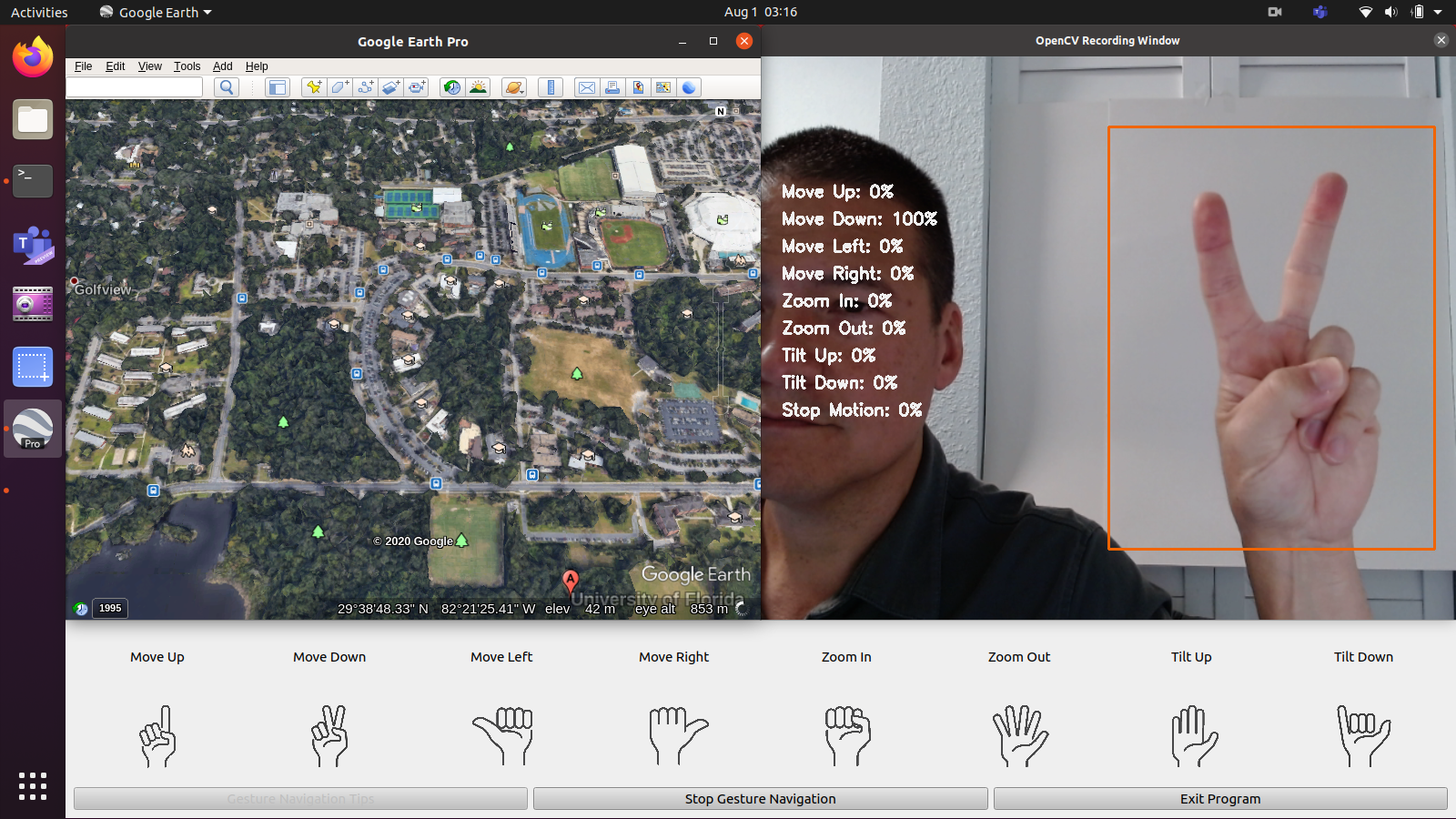 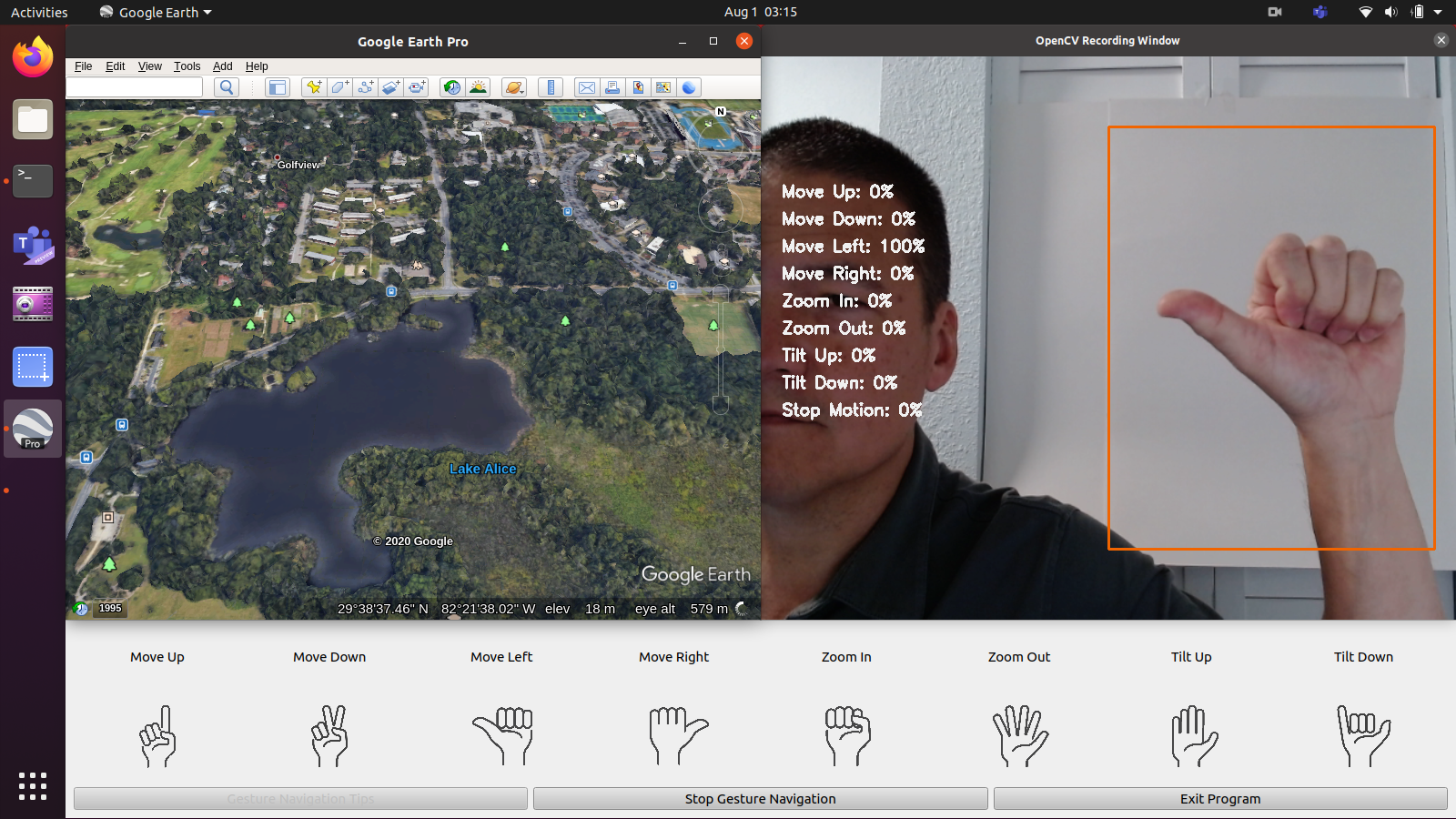 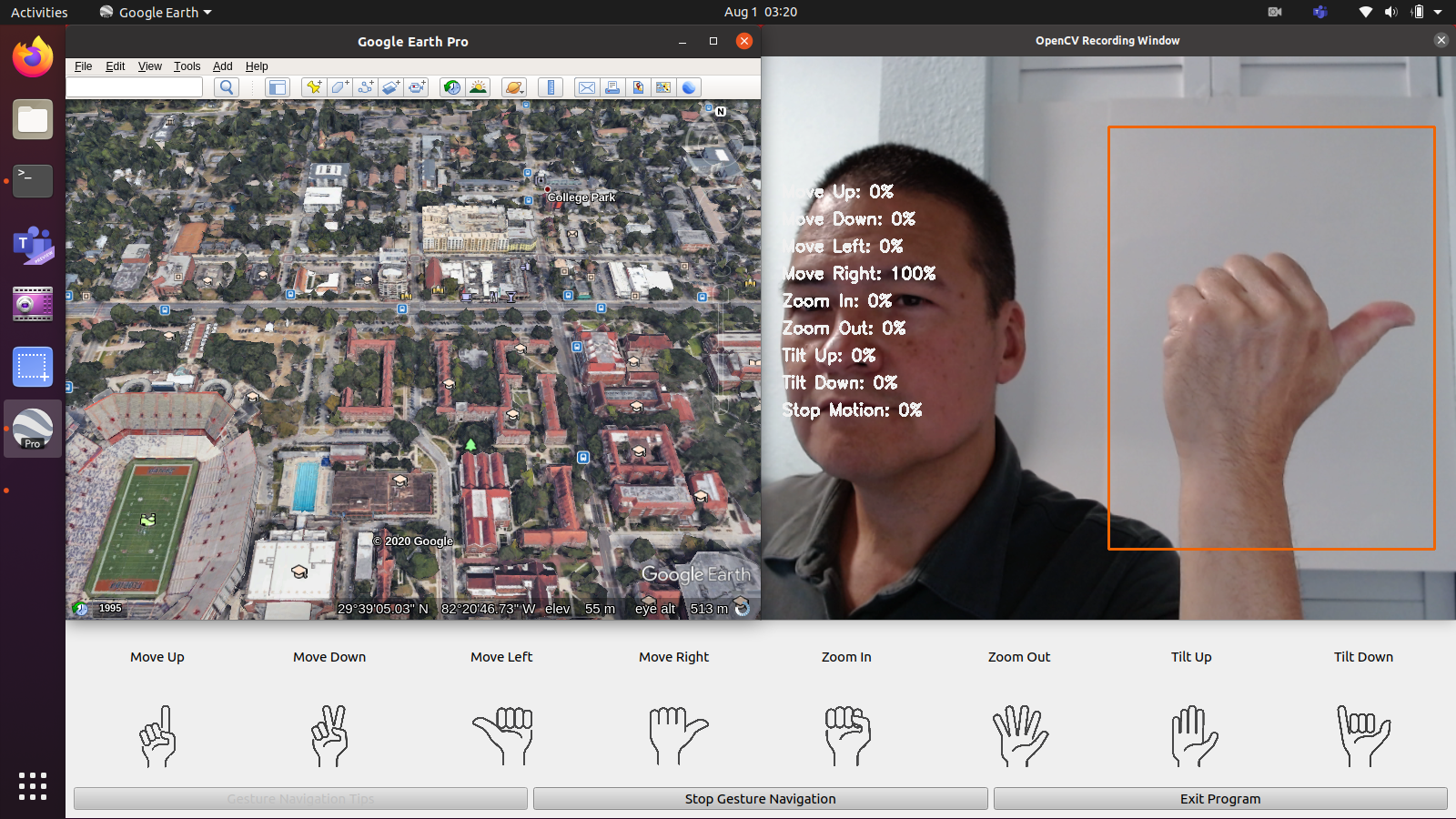 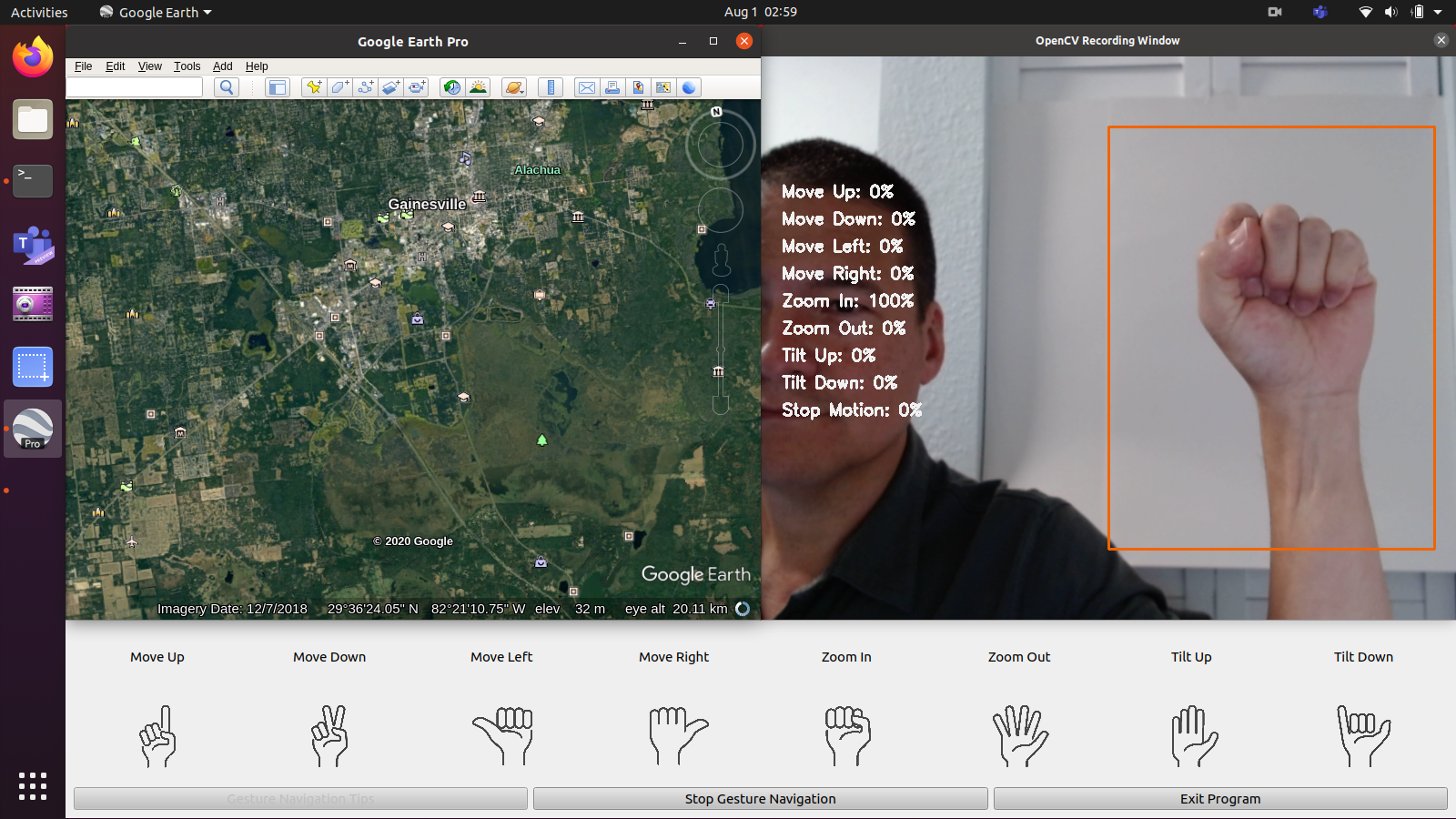 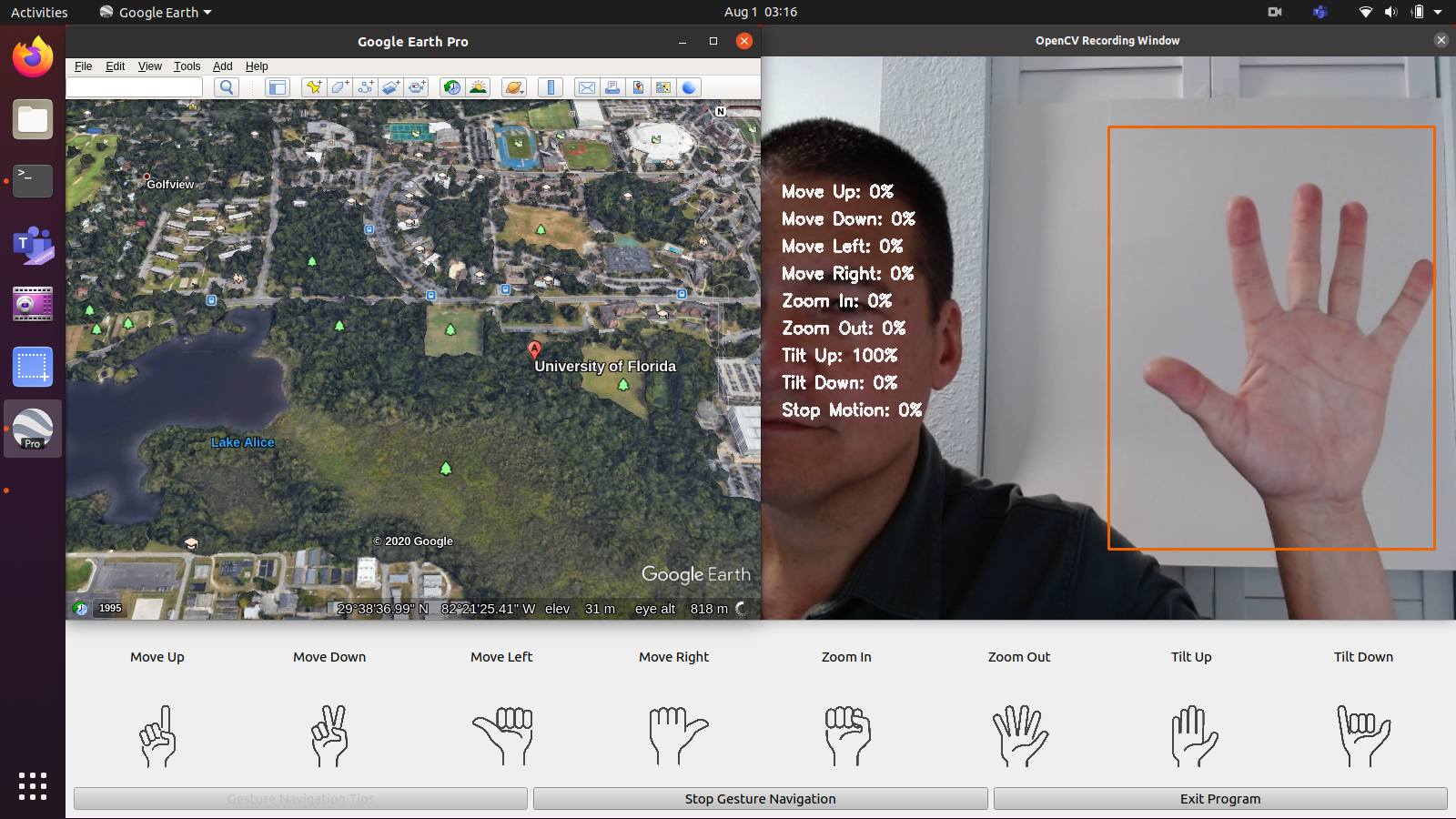 Gesture navigation with open palm with fingers tight - Tilt Up 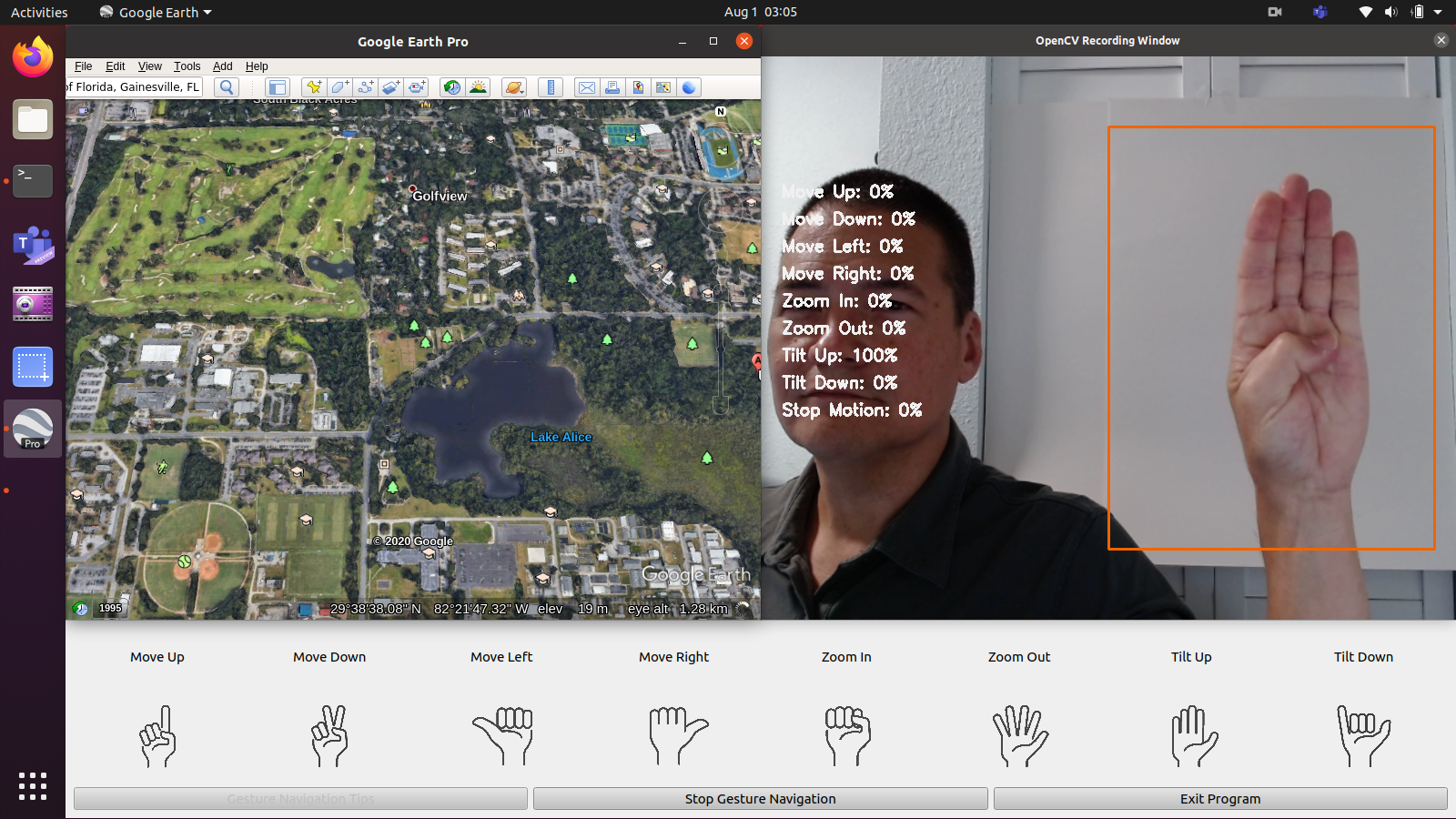 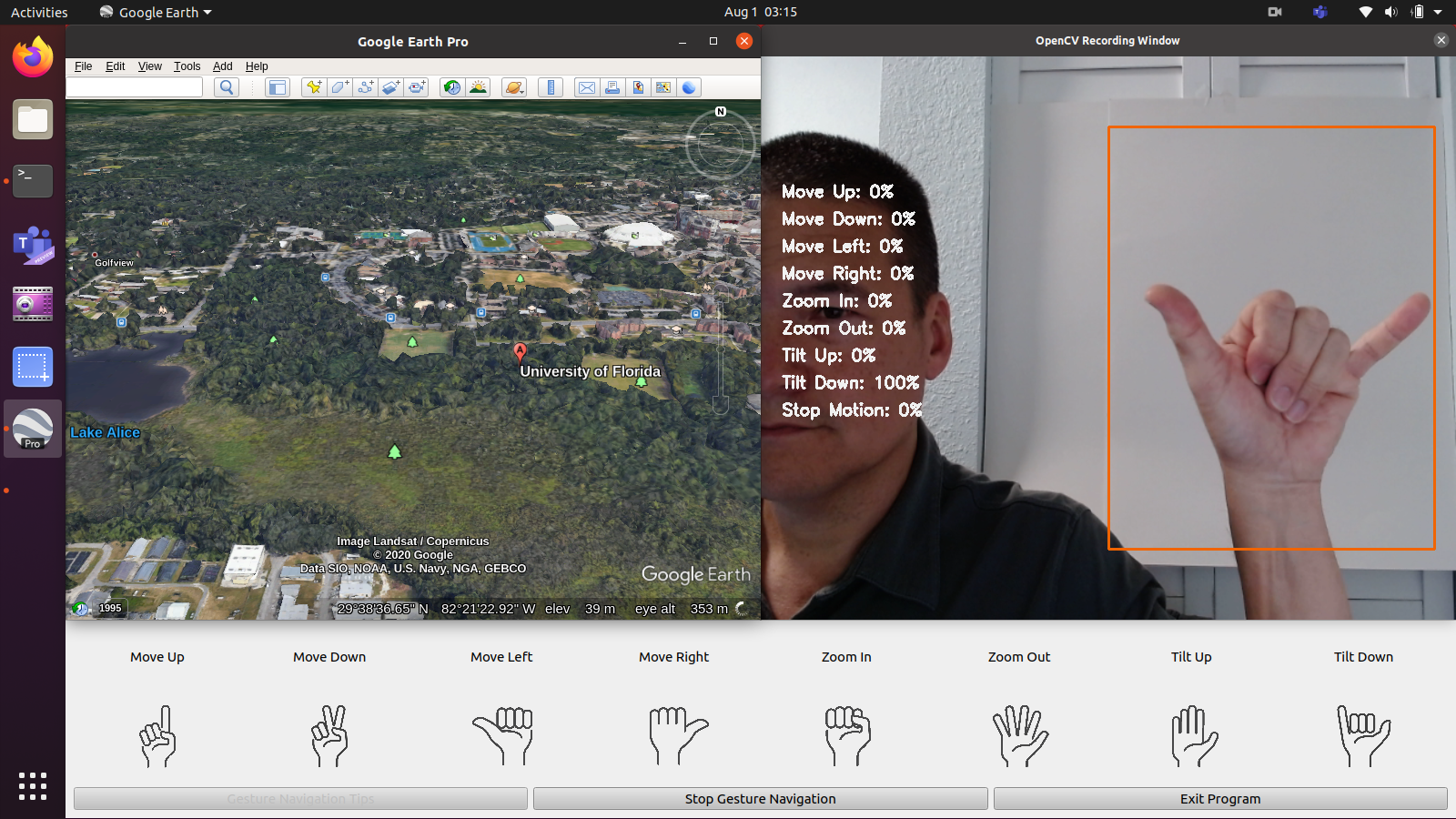 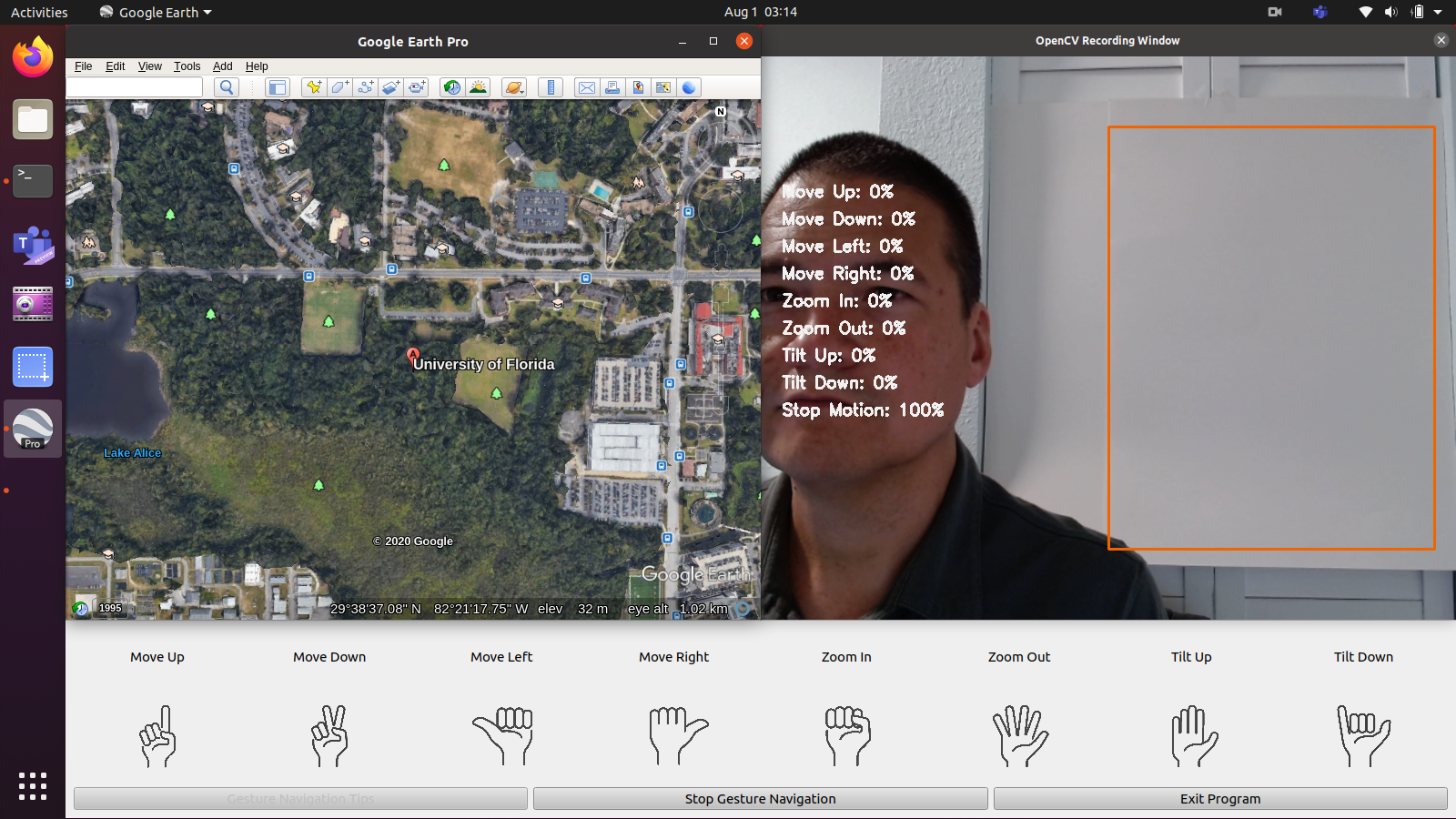 This README.md file and all other files and source code is located at the following GitHub Repository:

The python package PyHand-Earth receives a total of 1,555 weekly downloads. As such, PyHand-Earth popularity was classified as small. Visit the popularity section on Snyk Advisor to see the full health analysis.

Is PyHand-Earth safe to use?

While scanning the latest version of PyHand-Earth, we found that a security review is needed. A total of 1 vulnerabilities or license issues were detected. See the full security scan results.