The PyPI package mapbuffer receives a total of 2,173 downloads a week. As such, we scored mapbuffer popularity level to be Small.

Based on project statistics from the GitHub repository for the PyPI package mapbuffer, we found that it has been starred 3 times, and that 0 other projects in the ecosystem are dependent on it.

We found a way for you to contribute to the project! Looks like mapbuffer is missing a security policy.

Further analysis of the maintenance status of mapbuffer based on released PyPI versions cadence, the repository activity, and other data points determined that its maintenance is Healthy.

We found a way for you to contribute to the project! Looks like mapbuffer is missing a Code of Conduct.

Serializable map of integers to bytes with near zero parsing.

MapBuffer is designed to allow you to store dictionaries mapping integers to binary buffers in a serialized format and then read that back in and use it without requiring an expensive parse of the entire dictionary. Instead, if you have a dictionary containing thousands of keys, but only need a few items from it you can extract them rapidly.

This serialization format was designed to solve a performance problem with our pipeline for merging skeleton fragments from a large dense image segmentation. The 3D image was carved up into a grid and each gridpoint generated potentially thousands of skeletons which were written into a single pickle file. Since an individual segmentation could cross many gridpoints, fusion across many files is required, but each file contains many irrelevant skeleton fragments for a given operation. In one measurement, pickle.loads was taking 68% of the processing time for an operation that was taking two weeks to run on hundreds of cores.

Therefore, this method was developed to skip parsing the dictionaries and rapidly extract skeleton fragments.

The MapBuffer object is designed to translate dictionaries into a serialized byte buffer and extract objects directly from it by consulting an index. The index consists of a series of key-value pairs where the values are indices into the byte stream where each object's data stream starts.

This means that the format is best regarded as immutable once written. It can be easily converted into a standard dictionary at will. The main purpose is for reading just a few objects out of a larger stream of data.

The following benchmark was derived from running perf.py. 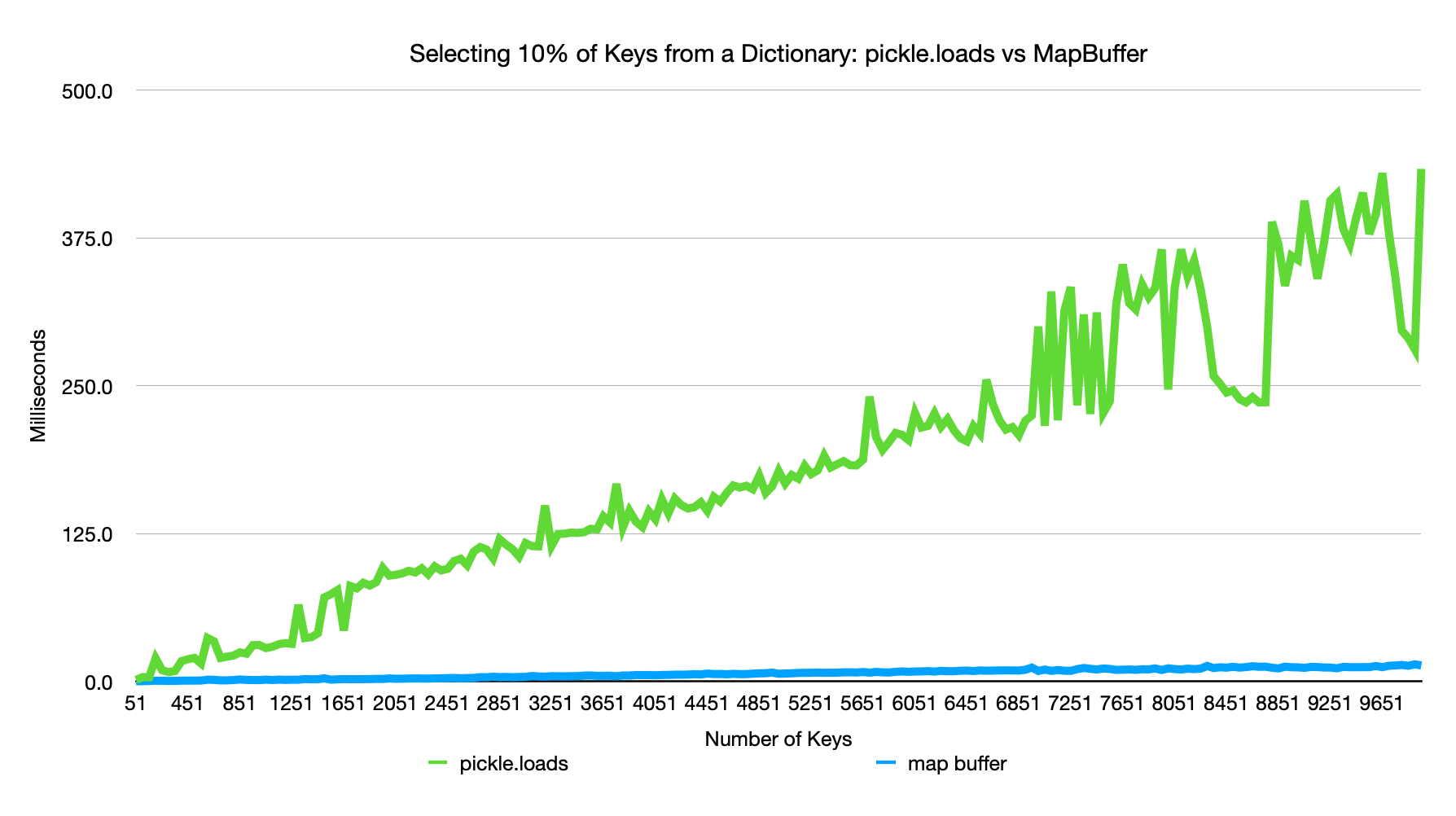 The byte string format consists of a 16 byte header, an index, and a series of (possibily individually compressed) serialized objects.

The index is an array of label and offset pairs (both uint64) that tell you where in the byte stream to start reading. The read length can be determined by referencing the next offset which are guaranteed to be in ascending order. The labels however, are written in Eyztinger order to enable cache-aware binary search.

The index can be consulted by conducting an Eytzinger binary search over the labels to find the correct offset.

The data objects are serialized to bytes and compressed individually if the header indicates they should be. They are then concatenated in the same order the index specifies.

The concept here was inspired by Flatbuffers.Flexbuffers, however the Python implementation (not the C++ implementation) there was a little slow as of this writing. We also add a few differences:

Is mapbuffer safe to use?

The python package mapbuffer was scanned for known vulnerabilities and missing license, and no issues were found. Thus the package was deemed as safe to use. See the full health analysis review.

We found that mapbuffer demonstrated a healthy version release cadence and project activity. It has a community of 1 open source contributors collaborating on the project. See the full package health analysis to learn more about the package maintenance status.