The PyPI package jgscm receives a total of 896 downloads a week. As such, we scored jgscm popularity level to be Limited.

Based on project statistics from the GitHub repository for the PyPI package jgscm, we found that it has been starred 45 times, and that 0 other projects in the ecosystem are dependent on it.

We found a way for you to contribute to the project! Looks like jgscm is missing a security policy.

Further analysis of the maintenance status of jgscm based on released PyPI versions cadence, the repository activity, and other data points determined that its maintenance is Inactive.

An important project maintenance signal to consider for jgscm is that it hasn't seen any new versions released to PyPI in the past 12 months, and could be considered as a discontinued project, or that which receives low attention from its maintainers.

Jupyter Google Storage Contents Manager allows working with Jupyter notebooks directly in Google Cloud Storage. It aims to be a complete drop-in replacement for the stock filesystem ContentsManager. Thus JGSCM is only compatible with a relatively modern IPython/Jupyter stack (version 4 and above).

The root level of the virtual file system is the list of buckets, which are presented as directories. In turn, each bucket is presented as an ordinary folder where users can create files, subdirectories and notebooks. Besides, snapshots are completely supported too.

You must point to jgscm in Jupyter settings. Usually you'd need to edit ~/.jupyter/jupyter_notebook_config.py and insert the following:

project and keyfile must be set if gcloud cannot determine the defaults. Read more about it in one of the next sections.

...are welcome! See CONTRIBUTING and code of conduct.

Just launch and use Jupyter as usual.

On the root level, you may not create files, only directories and the latter are considered as new buckets. On deeper levels, there should be no difference. You can change the Google Cloud project in order to work with corresponding buckets in Jupyter configuration (see Projects and keyfiles).

GCS treats blobs with names ending with "/" as folders and so does this project. Since there is no special handling of directories in GCS, when you delete some blob which is the only one in it's parent directory, and the parent directory was not created explicitly, it will disappear as well. This behavior is similar to some old-style source control systems.

GCS API invocations can take some time. While JGSCM does it's best to reduce the number of calls, they still can introduce substantial delays in Jupyter UI. Please, be patient.

There is an ability to specify the starting path instead of the buckets listing:

(--notebook-dir does not seem to work).

The name of each checkpoint is <notebook name>-UUID4.ipynb.

As with any UNIX filesystem, files and directories with names starting with dot "." are considered hidden by default. You can change this by setting c.GoogleStorageContentManager.hide_dotted_blobs to False.

Regarding keyfiles, please read the official documentation. Go to API Manager / Credentials in cloud console to generate it: 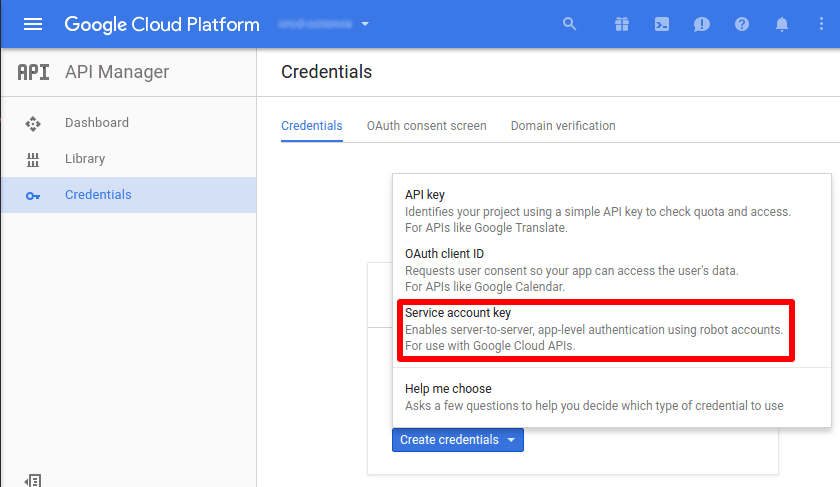 The python package jgscm receives a total of 896 weekly downloads. As such, jgscm popularity was classified as limited. Visit the popularity section on Snyk Advisor to see the full health analysis.

We found indications that jgscm is an Inactive project. See the full package health analysis to learn more about the package maintenance status.

Is jgscm safe to use?

The python package jgscm was scanned for known vulnerabilities and missing license, and no issues were found. Thus the package was deemed as safe to use. See the full health analysis review.