The PyPI package jax-md receives a total of 966 downloads a week. As such, we scored jax-md popularity level to be Small.

Based on project statistics from the GitHub repository for the PyPI package jax-md, we found that it has been starred 856 times, and that 0 other projects in the ecosystem are dependent on it.

We found a way for you to contribute to the project! Looks like jax-md is missing a security policy.

A security vulnerability was detected in an indirect dependency that is added to your project when the latest version of jax-md is installed.

Further analysis of the maintenance status of jax-md based on released PyPI versions cadence, the repository activity, and other data points determined that its maintenance is Healthy.

With more than 10 contributors for the jax-md repository, this is possibly a sign for a growing and inviting community.

We found a way for you to contribute to the project! Looks like jax-md is missing a Code of Conduct.

Molecular dynamics is a workhorse of modern computational condensed matter physics. It is frequently used to simulate materials to observe how small scale interactions can give rise to complex large-scale phenomenology. Most molecular dynamics packages (e.g. HOOMD Blue or LAMMPS) are complicated, specialized pieces of code that are many thousands of lines long. They typically involve significant code duplication to allow for running simulations on CPU and GPU. Additionally, large amounts of code is often devoted to taking derivatives of quantities to compute functions of interest (e.g. gradients of energies to compute forces).

However, recent work in machine learning has led to significant software developments that might make it possible to write more concise molecular dynamics simulations that offer a range of benefits. Here we target JAX, which allows us to write python code that gets compiled to XLA and allows us to run on CPU, GPU, or TPU. Moreover, JAX allows us to take derivatives of python code. Thus, not only is this molecular dynamics simulation automatically hardware accelerated, it is also end-to-end differentiable. This should allow for some interesting experiments that we're excited to explore.

JAX, MD is a research project that is currently under development. Expect sharp edges and possibly some API breaking changes as we continue to support a broader set of simulations. JAX MD is a functional and data driven library. Data is stored in arrays or tuples of arrays and functions transform data from one state to another.

For a video introducing JAX MD along with a demo, check out this talk from the Physics meets Machine Learning series: 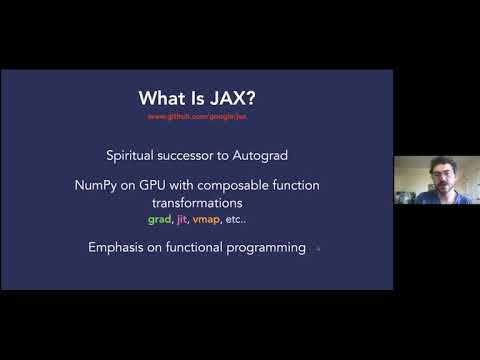 To get started playing around with JAX MD check out the following colab notebooks on Google Cloud without needing to install anything. For a very simple introduction, I would recommend the Minimization example. For an example of a bunch of the features of JAX MD, check out the JAX MD cookbook.

You can install JAX MD locally with pip,

If you want to build the latest version then you can grab the most recent version from head,

We now summarize the main components of the library.

In general we must have a way of computing the pairwise distance between atoms. We must also have efficient strategies for moving atoms in some space that may or may not be globally isomorphic to R^N. For example, periodic boundary conditions are commonplace in simulations and must be respected. Spaces are defined as a pair of functions, (displacement_fn, shift_fn). Given two points displacement_fn(R_1, R_2) computes the displacement vector between the two points. If you would like to compute displacement vectors between all pairs of points in a given (N, dim) matrix the function space.map_product appropriately vectorizes displacement_fn. It is often useful to define a metric instead of a displacement function in which case you can use the helper function space.metric to convert a displacement function to a metric function. Given a point and a shift shift_fn(R, dR) displaces the point R by an amount dR.

The following spaces are currently supported:

In the simplest case, molecular dynamics calculations are often based on a pair potential that is defined by a user. This then is used to compute a total energy whose negative gradient gives forces. One of the very nice things about JAX is that we get forces for free! The second part of the code is devoted to computing energies.

We provide the following classical potentials:

For finite-ranged potentials it is often useful to consider only interactions within a certain neighborhood. We include the _neighbor_list modifier to the above potentials that uses a list of neighbors (see below) for optimization.

Given an energy function and a system, there are a number of dynamics are useful to simulate. The simulation code is based on the structure of the optimizers found in JAX. In particular, each simulation function returns an initialization function and an update function. The initialization function takes a set of positions and creates the necessary dynamical state variables. The update function does a single step of dynamics to the dynamical state variables and returns an updated state.

We include a several different kinds of dynamics. However, there is certainly room to add more for e.g. constant strain simulations.

It is often desirable to find an energy minimum of the system. We provide two methods to do this. We provide simple gradient descent minimization. This is mostly for pedagogical purposes, since it often performs poorly. We additionally include the FIRE algorithm which often sees significantly faster convergence. Moreover a common experiment to run in the context of molecular dynamics is to simulate a system with a fixed volume and temperature.

We provide the following dynamics:

In many applications, it is useful to construct spatial partitions of particles / objects in a simulation.

We provide the following methods:

JAX MD is under active development. We have very limited development resources and so we typically focus on adding features that will have high impact to researchers using JAX MD (including us). Please don't hesitate to open feature requests to help us guide development. We more than welcome contributions!

JAX MD has been used in the following publications. If you don't see your paper on the list, but you used JAX MD let us know and we'll add it to the list!

If you use the code in a publication, please cite the repo using the .bib,

The python package jax-md receives a total of 966 weekly downloads. As such, jax-md popularity was classified as small. Visit the popularity section on Snyk Advisor to see the full health analysis.

We found that jax-md demonstrated a healthy version release cadence and project activity. It has a community of 20 open source contributors collaborating on the project. See the full package health analysis to learn more about the package maintenance status.

Is jax-md safe to use?

While scanning the latest version of jax-md, we found that a security review is needed. A total of 1 vulnerabilities or license issues were detected. See the full security scan results.