The PyPI package dowhy receives a total of 24,533 downloads a week. As such, we scored dowhy popularity level to be Popular.

Based on project statistics from the GitHub repository for the PyPI package dowhy, we found that it has been starred 5,230 times, and that 0 other projects in the ecosystem are dependent on it.

We found a way for you to contribute to the project! Looks like dowhy is missing a security policy.

A security vulnerability was detected in an indirect dependency that is added to your project when the latest version of dowhy is installed.

Further analysis of the maintenance status of dowhy based on released PyPI versions cadence, the repository activity, and other data points determined that its maintenance is Healthy.

With more than 10 contributors for the dowhy repository, this is possibly a sign for a growing and inviting community.

We found a way for you to contribute to the project! Looks like dowhy is missing a Code of Conduct.

Not sure how to use dowhy?

To help you get started, we've collected the most common ways that dowhy is being used within popular public projects.

View more ways to use dowhy

Read the docs | Try it online! 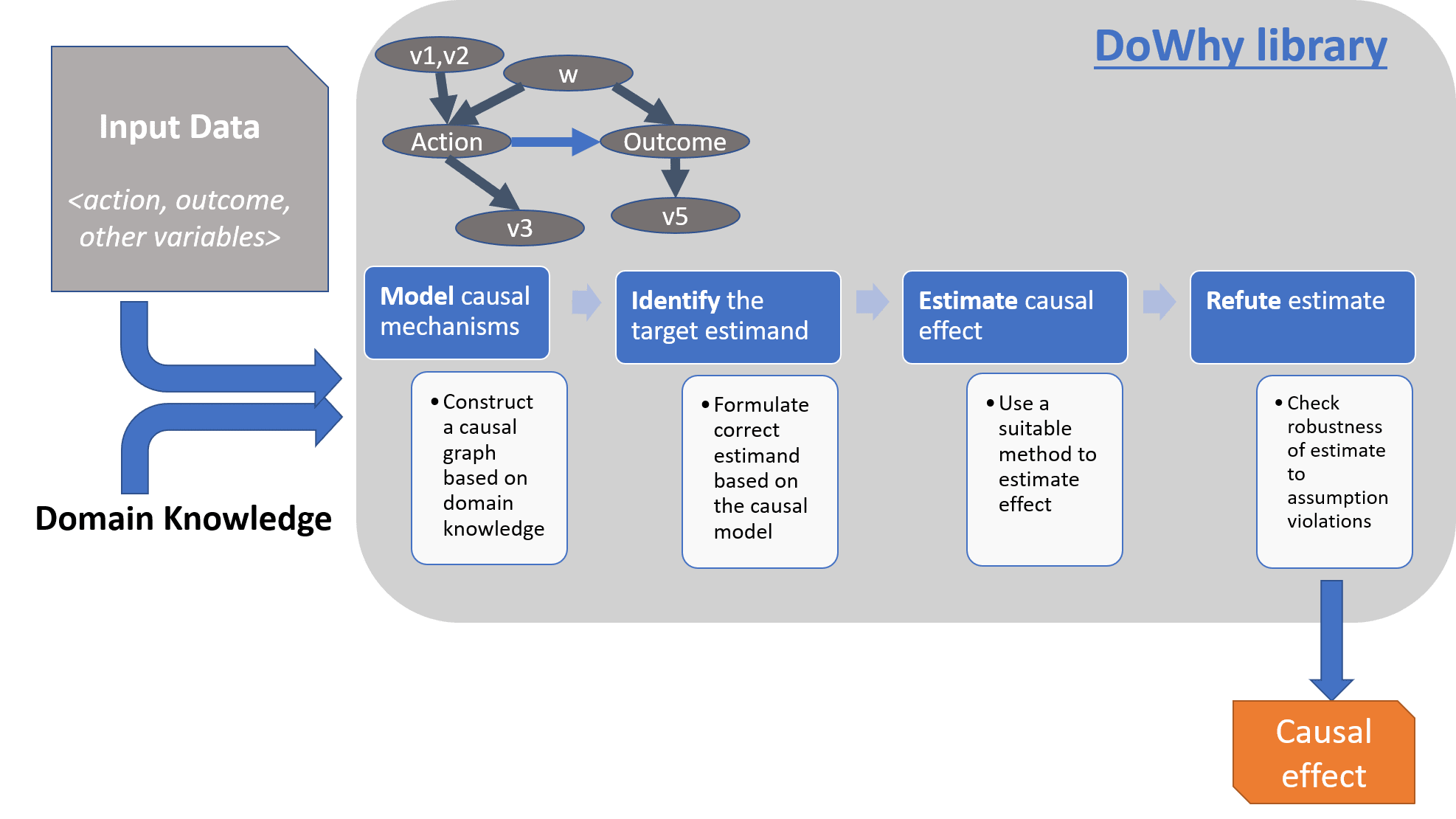 As computing systems are more frequently and more actively intervening in societally critical domains such as healthcare, education, and governance, it is critical to correctly predict and understand the causal effects of these interventions. Without an A/B test, conventional machine learning methods, built on pattern recognition and correlational analyses, are insufficient for decision-making.

Much like machine learning libraries have done for prediction, "DoWhy" is a Python library that aims to spark causal thinking and analysis. DoWhy provides a principled four-step interface for causal inference that focuses on explicitly modeling causal assumptions and validating them as much as possible. The key feature of DoWhy is its state-of-the-art refutation API that can automatically test causal assumptions for any estimation method, thus making inference more robust and accessible to non-experts. DoWhy supports estimation of the average causal effect for backdoor, frontdoor, instrumental variable and other identification methods, and estimation of the conditional effect (CATE) through an integration with the EconML library.

For a quick introduction to causal inference, check out amit-sharma/causal-inference-tutorial. We also gave a more comprehensive tutorial at the ACM Knowledge Discovery and Data Mining (KDD 2018) conference: causalinference.gitlab.io/kdd-tutorial. For an introduction to the four steps of causal inference and its implications for machine learning, you can access this video tutorial from Microsoft Research: DoWhy Webinar.

The need for causal inference

Predictive models uncover patterns that connect the inputs and outcome in observed data. To intervene, however, we need to estimate the effect of changing an input from its current value, for which no data exists. Such questions, involving estimating a counterfactual, are common in decision-making scenarios.

Answering these questions requires causal reasoning. While many methods exist for causal inference, it is hard to compare their assumptions and robustness of results. DoWhy makes three contributions,

To see DoWhy in action, check out how it can be applied to estimate the effect of a subscription or rewards program for customers [Rewards notebook] and for implementing and evaluating causal inference methods on benchmark datasets like the Infant Health and Development Program (IHDP) dataset, Infant Mortality (Twins) dataset, and the Lalonde Jobs dataset.

DoWhy support Python 3.6+. To install, you can use pip or conda.

If you face "Solving environment" problems with conda, then try conda update --all and then install dowhy. If that does not work, then use conda config --set channel_priority false and try to install again. If the problem persists, please add your issue here.

If you prefer the latest dev version, clone this repository and run the following command from the top-most folder of the repository.

If you face any problems, try installing dependencies manually.

Optionally, if you wish to input graphs in the dot format, then install pydot (or pygraphviz).

For better-looking graphs, you can optionally install pygraphviz. To proceed, first install graphviz and then pygraphviz (on Ubuntu and Ubuntu WSL).

Most DoWhy analyses for causal inference take 4 lines to write, assuming a pandas dataframe df that contains the data:

DoWhy supports two formats for providing the causal graph: gml (preferred) and dot. After loading in the data, we use the four main operations in DoWhy: model, estimate, identify and refute:

DoWhy stresses on the interpretability of its output. At any point in the analysis, you can inspect the untested assumptions, identified estimands (if any) and the estimate (if any). Here's a sample output of the linear regression estimator. 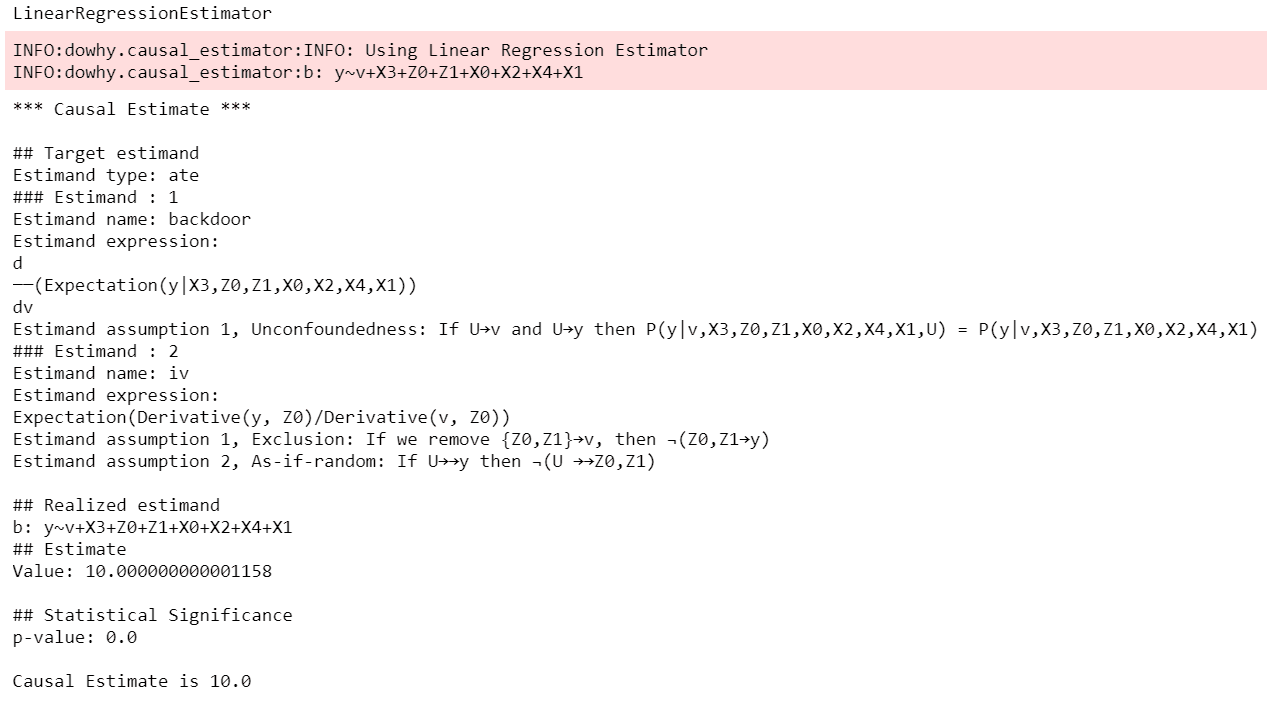 For a full code example, check out the Getting Started with DoWhy notebook. You can also use Conditional Average Treatment Effect (CATE) estimation methods from other libraries such as EconML and CausalML, as shown in the Conditional Treatment Effects notebook. For more examples of using DoWhy, check out the Jupyter notebooks in docs/source/example_notebooks or try them online at Binder.

Graphical causal model-based inference, or GCM-based inference for short, is an experimental addition to DoWhy. For details, check out the documentation for the gcm sub-package. The basic recipe for this API works as follows:

Where <causal_query> can be one of multiple functions explained in Answering Causal Questions.

We've made an even simpler API for dowhy which is a light layer on top of the standard one. The goal is to make causal analysis much more like regular exploratory analysis. To use this API, simply import dowhy.api. This will magically add the causal namespace to your pandas.DataFrame s. Then, you can use the namespace as follows. 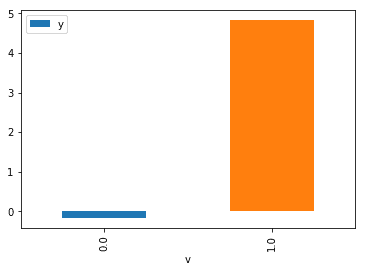 Note:If the variable_types is not specified we make use of the following implicit conversions: :

Currently we have not added support for timestamps.

The do method in the causal namespace generates a random sample from $P(outcome|do(X=x))$ of the same length as your data set, and returns this outcome as a new DataFrame. You can continue to perform the usual DataFrame operations with this sample, and so you can compute statistics and create plots for causal outcomes!

The do method is built on top of the lower-level dowhy objects, so can still take a graph and perform identification automatically when you provide a graph instead of common_causes.

For more details, check out the Pandas API notebook or the Do Sampler notebook.

Graphical Models and Potential Outcomes: Best of both worlds

DoWhy builds on two of the most powerful frameworks for causal inference: graphical models and potential outcomes. It uses graph-based criteria and do-calculus for modeling assumptions and identifying a non-parametric causal effect. For estimation, it switches to methods based primarily on potential outcomes.

A unifying language for causal inference

DoWhy is based on a simple unifying language for causal inference. Causal inference may seem tricky, but almost all methods follow four key steps:

This workflow can be captured by four key verbs in DoWhy:

Using these verbs, DoWhy implements a causal inference engine that can support a variety of methods. model encodes prior knowledge as a formal causal graph, identify uses graph-based methods to identify the causal effect, estimate uses statistical methods for estimating the identified estimand, and finally refute tries to refute the obtained estimate by testing robustness to assumptions.

Each analysis starts with a building a causal model. The assumptions can be viewed graphically or in terms of conditional independence statements. Wherever possible, DoWhy can also automatically test for stated assumptions using observed data.

DoWhy respects this boundary and treats them separately. This focuses the causal inference effort on identification, and frees up estimation using any available statistical estimator for a target estimand. In addition, multiple estimation methods can be used for a single identified_estimand and vice-versa.

Automated robustness checks
What happens when key identifying assumptions may not be satisfied?

The most critical, and often skipped, part of causal analysis is checking the robustness of an estimate to unverified assumptions. DoWhy makes it easy to automatically run sensitivity and robustness checks on the obtained estimate.

Below are more details about the current implementation of each of these verbs.

I. Model a causal problem

DoWhy creates an underlying causal graphical model for each problem. This serves to make each causal assumption explicit. This graph need not be complete---you can provide a partial graph, representing prior knowledge about some of the variables. DoWhy automatically considers the rest of the variables as potential confounders.

Currently, DoWhy supports two formats for graph input: gml (preferred) and dot. We strongly suggest to use gml as the input format, as it works well with networkx. You can provide the graph either as a .gml file or as a string. If you prefer to use dot format, you will need to install additional packages (pydot or pygraphviz, see the installation section above). Both .dot files and string format are supported.

While not recommended, you can also specify common causes and/or instruments directly instead of providing a graph.

Examples of how to instantiate a causal model are in the Getting Started notebook.

II. Identify a target estimand under the model

Based on the causal graph, DoWhy finds all possible ways of identifying a desired causal effect based on the graphical model. It uses graph-based criteria and do-calculus to find potential ways find expressions that can identify the causal effect.

III. Estimate causal effect based on the identified estimand

DoWhy supports methods based on both back-door criterion and instrumental variables. It also provides a non-parametric confidence intervals and a permutation test for testing the statistical significance of obtained estimate.

Examples of using these methods are in the Estimation methods notebook.

More examples are in the Conditional Treatment Effects with DoWhy notebook.

Having access to multiple refutation methods to validate an effect estimate from a causal estimator is a key benefit of using DoWhy.

Examples of using refutation methods are in the Refutations notebook. For an advanced refutation that uses a simulated dataset based on user-provided or learnt data-generating processes, check out the Dummy Outcome Refuter notebook. As a practical example, this notebook shows an application of refutation methods on evaluating effect estimators for the Infant Health and Development Program (IHDP) and Lalonde datasets.

If you find DoWhy useful for your research work, please cite us as follows:

Alternatively, you can cite our Arxiv paper on DoWhy.

And if you find the gcm package useful for your work, please also cite us as:

The projects page lists the next steps for DoWhy. If you would like to contribute, have a look at the current projects. If you have a specific request for DoWhy, please raise an issue.

This project welcomes contributions and suggestions. For a guide to contributing and a list of all contributors, check out CONTRIBUTING.md. Our contributor code of conduct is available [here](https://github.com/py-why/governance/blob/main/CODE-OF-CONDUCT.md). You can also join the DoWhy development channel on Discord:

The python package dowhy receives a total of 24,533 weekly downloads. As such, dowhy popularity was classified as a popular. Visit the popularity section on Snyk Advisor to see the full health analysis.

We found that dowhy demonstrated a healthy version release cadence and project activity. It has a community of 60 open source contributors collaborating on the project. See the full package health analysis to learn more about the package maintenance status.

Is dowhy safe to use?

While scanning the latest version of dowhy, we found that a security review is needed. A total of 1 vulnerabilities or license issues were detected. See the full security scan results.