Based on project statistics from the GitHub repository for the PyPI package click-completion, we found that it has been starred 266 times.

We found a way for you to contribute to the project! Looks like click-completion is missing a security policy.

Further analysis of the maintenance status of click-completion based on released PyPI versions cadence, the repository activity, and other data points determined that its maintenance is Inactive.

An important project maintenance signal to consider for click-completion is that it hasn't seen any new versions released to PyPI in the past 12 months, and could be considered as a discontinued project, or that which receives low attention from its maintainers.

Readme
Yes
Contributing.md
No
Code of Conduct
No
Contributors
20
Funding
No

With more than 10 contributors for the click-completion repository, this is possibly a sign for a growing and inviting community.

We found a way for you to contribute to the project! Looks like click-completion is missing a Code of Conduct.

All the supported shells are able to complete all the command line arguments and options defined with click. In addition, fish and Zsh are also displaying the options and commands help during the completion. 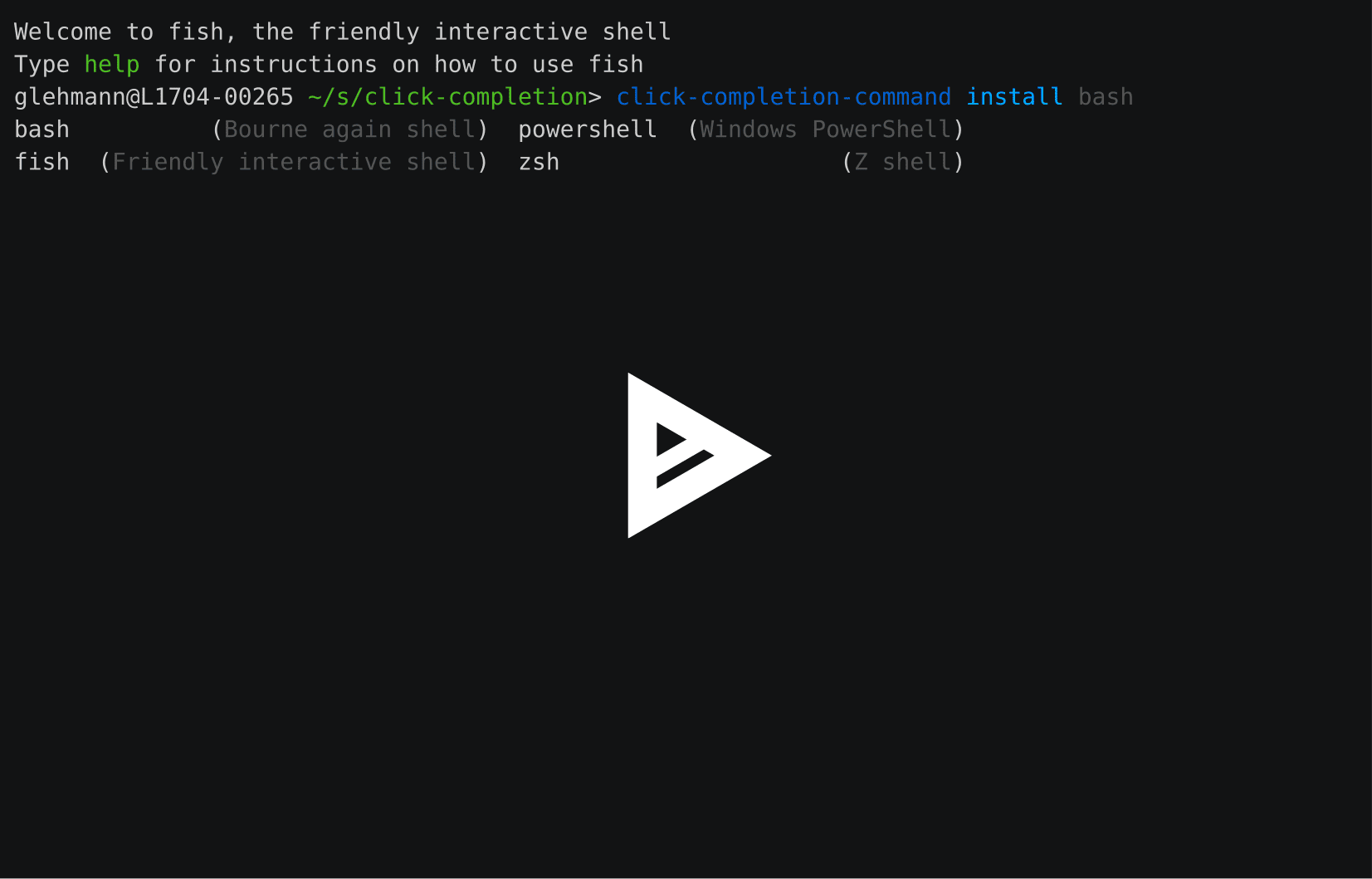 In order to activate the completion, you need to:

click_completion monkey-patches click in order to enhance the native completion capabilities. This is done very simply:

Once done, your click application is ready for completion.

click_completion has some functions to produce the code to be executed by the shell during the completion, and to permanently install this code in a place that is automatically loaded by the shell.

The key functions are:

And of course to make it useful, you'll need to use fish, Bash, Zsh or PowerShell.

click_complete has a startswith function that can be replaced by a custom one in order to customize the completion. Some extra environment variable to be used during the completion can be passed to get_code and install. An example is available in examples/click-completion-command.

An example can be found in the class DocumentedChoice in click_completion/init.py.

As click, the general way click_completion works is through a magic environment variable called _<PROG_NAME>_COMPLETE, where <PROG_NAME> is your application executable name in uppercase with dashes replaced by underscores.

If your tool is called foo-bar, then the magic variable is called _FOO_BAR_COMPLETE. By exporting it with the source value it will spit out the activation script which can be trivially activated.

For instance, to enable fish completion for your foo-bar script, this is what you would need to put into your ~/.config/fish/completions/foo-bar.fish

From this point onwards, your script will have fish completion enabled.

The above activation example will always invoke your application on startup. This might be slowing down the shell activation time significantly if you have many applications. Alternatively, you could also ship a file with the contents of that, which is what Git and other systems are doing.

This can be easily accomplished:

Contributions are all very welcome!

This may be in the form of bug reports, pull requests, …

We found indications that click-completion is an Inactive project. See the full package health analysis to learn more about the package maintenance status.

Is click-completion safe to use?

The python package click-completion was scanned for known vulnerabilities and missing license, and no issues were found. Thus the package was deemed as safe to use. See the full health analysis review.