The PyPI package byteps receives a total of 34 downloads a week. As such, we scored byteps popularity level to be Small.

Based on project statistics from the GitHub repository for the PyPI package byteps, we found that it has been starred 3,344 times.

We found a way for you to contribute to the project! Looks like byteps is missing a security policy.

Further analysis of the maintenance status of byteps based on released PyPI versions cadence, the repository activity, and other data points determined that its maintenance is Inactive.

An important project maintenance signal to consider for byteps is that it hasn't seen any new versions released to PyPI in the past 12 months, and could be considered as a discontinued project, or that which receives low attention from its maintainers.

With more than 10 contributors for the byteps repository, this is possibly a sign for a growing and inviting community.

We found a way for you to contribute to the project! Looks like byteps is missing a Code of Conduct.

Not sure how to use byteps?

To help you get started, we've collected the most common ways that byteps is being used within popular public projects.

View more ways to use byteps

BytePS is a high performance and general distributed training framework. It supports TensorFlow, Keras, PyTorch, and MXNet, and can run on either TCP or RDMA network.

BytePS outperforms existing open-sourced distributed training frameworks by a large margin. For example, on BERT-large training, BytePS can achieve ~90% scaling efficiency with 256 GPUs (see below), which is much higher than Horovod+NCCL. In certain scenarios, BytePS can double the training speed compared with Horovod+NCCL.

We show our experiment on BERT-large training, which is based on GluonNLP toolkit. The model uses mixed precision.

We use Tesla V100 32GB GPUs and set batch size equal to 64 per GPU. Each machine has 8 V100 GPUs (32GB memory) with NVLink-enabled. Machines are inter-connected with 100 Gbps RDMA network. This is the same hardware setup you can get on AWS. 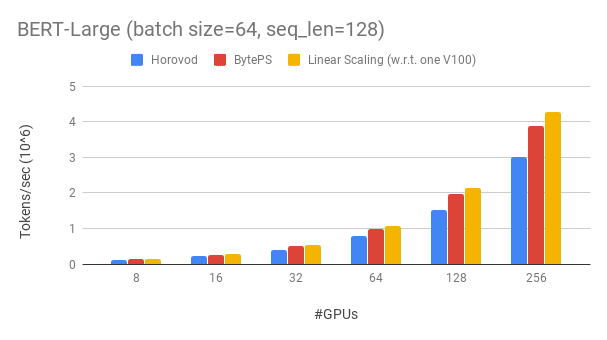 With slower network, BytePS offers even more performance advantages -- up to 2x of Horovod+NCCL. You can find more evaluation results at performance.md.

How can BytePS outperform Horovod by so much? One of the main reasons is that BytePS is designed for cloud and shared clusters, and throws away MPI.

MPI was born in the HPC world and is good for a cluster built with homogeneous hardware and for running a single job. However, cloud (or in-house shared clusters) is different.

This leads us to rethink the best communication strategy, as explained in here. In short, BytePS only uses NCCL inside a machine, while re-implements the inter-machine communication.

We provide a step-by-step tutorial for you to run benchmark training tasks. The simplest way to start is to use our docker images. Refer to Documentations for how to launch distributed jobs and more detailed configurations. After you can start BytePS, read best practice to get the best performance.

Below, we explain how to install BytePS by yourself. There are two options.

You can try out the latest features by directly installing from master branch:

Notes for above two options:

Basic examples are provided under the example folder.

To reproduce the end-to-end evaluation in our OSDI'20 paper, find the code at this repo.

Use BytePS in Your Code

If your tasks only rely on Horovod's allreduce and broadcast, you should be able to switch to BytePS in 1 minute. Simply replace import horovod.tensorflow as hvd by import byteps.tensorflow as bps, and then replace all hvd in your code by bps. If your code invokes hvd.allreduce directly, you should also replace it by bps.push_pull.

Many of our examples were copied from Horovod and modified in this way. For instance, compare the MNIST example for BytePS and Horovod.

BytePS does not support pure CPU training for now. One reason is that the cheap PS assumption of BytePS do not hold for CPU training. Consequently, you need CUDA and NCCL to build and run BytePS.

We would like to have below features, and there is no fundamental difficulty to implement them in BytePS architecture. However, they are not implemented yet:

The python package byteps receives a total of 34 weekly downloads. As such, byteps popularity was classified as small. Visit the popularity section on Snyk Advisor to see the full health analysis.

We found indications that byteps is an Inactive project. See the full package health analysis to learn more about the package maintenance status.

Is byteps safe to use?

The python package byteps was scanned for known vulnerabilities and missing license, and no issues were found. Thus the package was deemed as safe to use. See the full health analysis review.