The PyPI package booger receives a total of 132 downloads a week. As such, we scored booger popularity level to be Limited.

Based on project statistics from the GitHub repository for the PyPI package booger, we found that it has been starred 1 times, and that 0 other projects in the ecosystem are dependent on it.

We found a way for you to contribute to the project! Looks like booger is missing a security policy.

Further analysis of the maintenance status of booger based on released PyPI versions cadence, the repository activity, and other data points determined that its maintenance is Inactive.

An important project maintenance signal to consider for booger is that it hasn't seen any new versions released to PyPI in the past 12 months, and could be considered as a discontinued project, or that which receives low attention from its maintainers.

We found a way for you to contribute to the project! Looks like booger is missing a Code of Conduct.

Eats the output of a nosetests run, and put it into a nice curses interface, instead of letting nosetests throw a tsunami of output into stdout after all the tests finish. 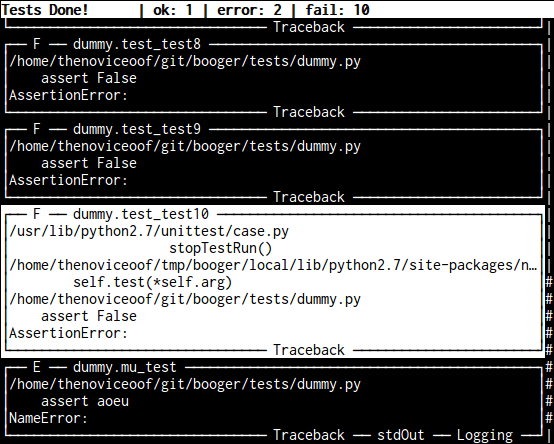 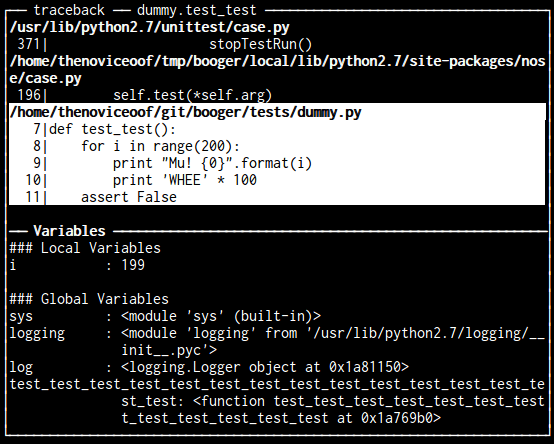 booger is on pypi:

To use booger, you can use either invoke it as a plugin, or call the wrapping script.

If you've ever threw nosetests on a big test suite, and a few of those tests happened to be broken with a ton of logging going on (as it should be), then you're going to have a bad time scrolling around trying to find the most pertinent information first.

Booger is an effort to give you the best information first, with more information easily available, quickly.

To this end, booger will progressively show you which tests are failing with the last line of the error's traceback along with the actual error, and make the stdout, logging, and the full traceback with the variables at each frame available.

Questions that will probably be asked frequently

Permission is hereby granted, free of charge, to any person obtaining a copy of this software and associated documentation files (the "Software"), to deal in the Software without restriction, including without limitation the rights to use, copy, modify, merge, publish, distribute, sublicense, and/or sell copies of the Software, and to permit persons to whom the Software is furnished to do so, subject to the following conditions:

The above copyright notice and this permission notice shall be included in all copies or substantial portions of the Software.

THE SOFTWARE IS PROVIDED "AS IS", WITHOUT WARRANTY OF ANY KIND, EXPRESS OR IMPLIED, INCLUDING BUT NOT LIMITED TO THE WARRANTIES OF MERCHANTABILITY, FITNESS FOR A PARTICULAR PURPOSE AND NONINFRINGEMENT. IN NO EVENT SHALL THE AUTHORS OR COPYRIGHT HOLDERS BE LIABLE FOR ANY CLAIM, DAMAGES OR OTHER LIABILITY, WHETHER IN AN ACTION OF CONTRACT, TORT OR OTHERWISE, ARISING FROM, OUT OF OR IN CONNECTION WITH THE SOFTWARE OR THE USE OR OTHER DEALINGS IN THE SOFTWARE.

The python package booger receives a total of 132 weekly downloads. As such, booger popularity was classified as limited. Visit the popularity section on Snyk Advisor to see the full health analysis.

We found indications that booger is an Inactive project. See the full package health analysis to learn more about the package maintenance status.

Is booger safe to use?

The python package booger was scanned for known vulnerabilities and missing license, and no issues were found. Thus the package was deemed as safe to use. See the full health analysis review.