The PyPI package bardolph receives a total of 1,212 downloads a week. As such, we scored bardolph popularity level to be Small.

Based on project statistics from the GitHub repository for the PyPI package bardolph, we found that it has been starred ? times, and that 0 other projects in the ecosystem are dependent on it.

We found a way for you to contribute to the project! Looks like bardolph is missing a security policy.

Further analysis of the maintenance status of bardolph based on released PyPI versions cadence, the repository activity, and other data points determined that its maintenance is Sustainable.

We found a way for you to contribute to the project! Looks like bardolph is missing a Code of Conduct.

Bardolph is a facility for controlling LIFX (https://www.lifx.com) lights through a simple scripting language. It is targeted at people who would like to control or experiment with their lights in an automated way, using a minimal amount of coding.

Using their names, you can control individual lights, groups or locations. Or, just pick a color for all the lights on your network. If you have any multi-zone lights, the language allows you to set colors for specific zones.

The program does not use the Internet to access the bulbs, and no login is required; all of its communication occurs over the local WiFi network. You can edit scripts with a basic text editor and run them from the command line.

The language may be missing some constructs you might expect, such as loops and arithmetic expressons, as it's still under development. However, it is also very simple, and should be usable by non-programmers.

Here is a script, named all_on.ls, that will turn on all your lights:

You run it with:

In this case, lsrun is a bash shell script that become available after you install Bardolph.

The duration parameter says to slowly shut off the lights over a period of 1.5 seconds, which is a much nicer experience than abruptly turning them off with no dimming.

Another example, red.ls, sets all the lights to a deep shade of red:

The application executes in the foreground as long as a script is running. In this example, the application will run for 5 minutes.

As a convenience, you can pass a script as a command-line parameter using lsrun -s, followed by the script code in a quoted string. For example, to turn off all the lights from the keyboard: 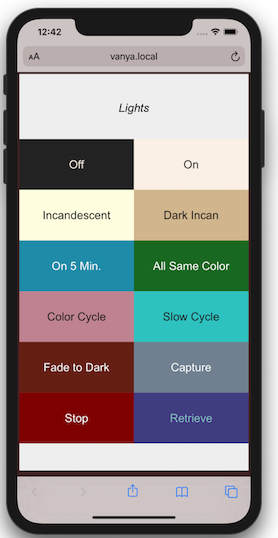 The web server component makes scripts available in a user-friendly manner. It implements a simple web page that lists available scripts and provides a 1:1 mapping betwen scripts and URL's. The server is designed to run locally, on your WiFi network.

For example, if have a machine with the hostname myserver.local, you could launch the all_on.ls script by going to http://myserver.local/all-on with any browser on your WiFi network. Because scripts can run over a long period of time, even indefinitely, a cheap, dedicated device like a Raspberry Pi is an ideal way to host the web server.

I've attempted to make it easy to use Bardolph scripts in your Python code. For some uses, this may be significantly easier than learning and using a full-purpose Python library. For example, here's a complete program that waits 5 seconds, turns all the lights off, and turns them on again after another 5 seconds:

The program has been tested on Python versions at or above 3.5.1. I haven't tried it, but I'm almost certain that it won't run on any 2.x version.

Because I haven't done any stress testing, I don't know the limits on script size. Note that the application loads the encoded script into memory before executing it.

Is bardolph safe to use?

The python package bardolph was scanned for known vulnerabilities and missing license, and no issues were found. Thus the package was deemed as safe to use. See the full health analysis review.

We found indications that bardolph maintenance is sustainable demonstrating some project activity. We saw a total of 1 open source contributors collaborating on the project. See the full package health analysis to learn more about the package maintenance status.