The PyPI package a8 receives a total of 359 downloads a week. As such, we scored a8 popularity level to be Limited.

Based on project statistics from the GitHub repository for the PyPI package a8, we found that it has been starred ? times, and that 0 other projects in the ecosystem are dependent on it.

We found a way for you to contribute to the project! Looks like a8 is missing a security policy.

Further analysis of the maintenance status of a8 based on released PyPI versions cadence, the repository activity, and other data points determined that its maintenance is Inactive.

An important project maintenance signal to consider for a8 is that it hasn't seen any new versions released to PyPI in the past 12 months, and could be considered as a discontinued project, or that which receives low attention from its maintainers.

The One True IDE™, successor to the PIDA IDE. An ultra-lightweight IDE, that embeds Vim, a terminal emulator, and a file browser and makes them work together. 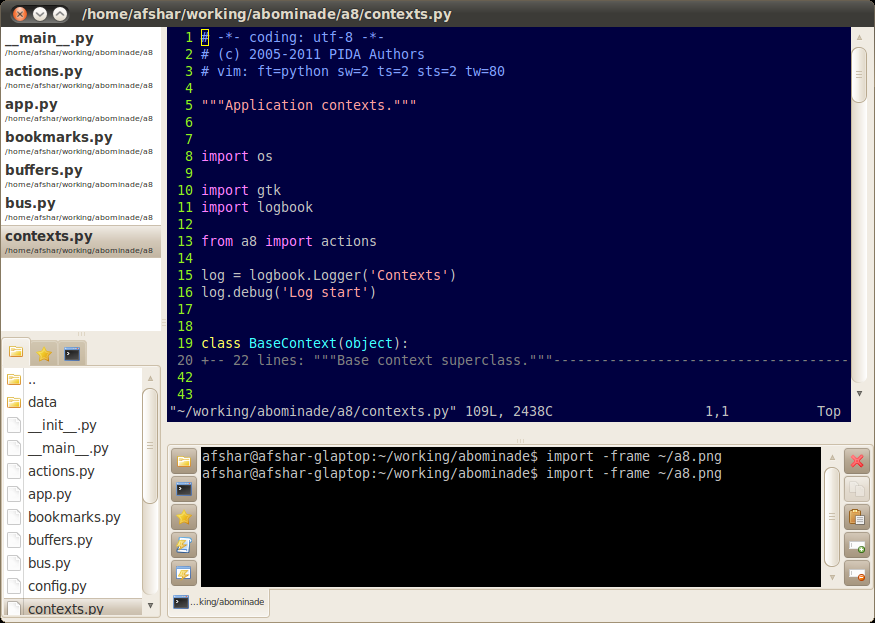 (non debian distros, please drop me a line to add you.)

a8 is a bit configurable. Not so much because I never planned on using it in more than one way.

Create a config file at ~/.a8/config.yaml

As the name suggests it will be in Yaml, as a map of key values:

Is the biggest bit, terminal options live under the temrinal key, and these are them, with default values if they exist (or Unset otherwise):

To turn on the toolbar:

To turn off sessions in 0.10 and earlier:

Terminals in a separate window

Keyboard shortucts are of two types:

This file should contain keys and values of the form:

or of the form

Where action is a string defining the action to be performed, and shortcut is a shortcut string.

Available actions are (with defaults):

The format looks like <Control>a or <Shift><Alt>F1 or <Release>z (the last one is for key release). The parser is fairly liberal and allows lower or upper case, and also abbreviations such as <Ctl> and <Ctrl>. Keys such as Up, Down, Left, Right etc are available, but be careful, the keypress will not pass through to the underlying app, terminal or Vim.

These are custom shell commands bound to a keyboard shortcut. Their format is different from internal a8 shortcuts. They should be part of a list in the value of the custom key. Each item in the list should define at least the key key as a shortcut string in the format above. Additionally they may define cmd, cwd and env keys. These are used to execute a new terminal with the command.

A8 is slightly extensible, to the absolute minimal degree to add functionality without having the burden of a massive framework. This is achieved by the concepts of:

Since we are just using Python, all the a8 API is public to any Python code in the same process, and that is intentional. If you want to break it by abusing this, go for it, break it.

Extensions are any Python module or instance with a callable setup attribute. The signature of setup should be:

Of course this can be in an object where the signature would be:

Extensions are listed in the configuration file under the extensions key, and should be importable names, such as a8.a8_example_ext, an example to get you started. If importing an attribute from a module, the : notation can be used, such as path.mymodule:myattr, which would be suitable for an instance as an extension.

The app that is passed to the setup function is an instance of a8.app.Abominade which is the main monolith for a8, i.e., it has access to everything. Terrible, but intentional.

The setup function can be used to create user interface features and to connect to signals, and as mentioned above, since all the API is public, anything can be achieved using this.

A8 exports a number of signals for use by extensions. They are not used internally, so mostly behave as a no op. These are connected using app.connect and can be emitted by using app.emit.

app.connect takes a signal name, and a callback to be called. Callbacks are only passed keyword arguments, so it is important to get the names of the arguments correct. here is an example of connecting to the file-saved signal in a plugin. All available signals and arguments are listed below.

If you need more signals, just let us know. Since they are not used internally, there is basically no cost.

What happened to my favourite PIDA feature?

Abominade doesn't hope to replace [http://pida.co.uk PIDA], how could it? So if you require some special PIDA features, please go ahead and use PIDA. Intentional Breakages

Does it work on a Mac?

Features intentionally left out of Abominade that make it simpler, but essentially a tool written for me. If you want a real application, try [https://bitbucket.org/aafshar/pida-main/wiki/Home PIDA]. The motivation for Abominade is to make an IDE that is tailor-made to me.

If you edit a lot of code on remote hosts, you can mount your project directory locally via SSHFS.

If you then SSH directly from a mounted local dir to the corresponding remote dir, Abominade's terminal filename recognition will still catch relative filenames. This will break if you cd in your SSH session so that relative paths don't match your local current dir anymore, but if you configure SSH's !EscapeChar setting, you can suspend SSH, cd locally, and resume SSH.

Another interesting trick is you start Abominade in an SSHFS dir while using a local session, the session will be shared with remote instances at the same path, and can be resumed on a different host.

It's a good idea to use GNU screen or tmux for some terminals in Abominade's terminals pane, since it's easy to accidentally close Abominade and lose your terminal history.

Haven't used this much in Abominade...

The python package a8 was scanned for known vulnerabilities and missing license, and no issues were found. Thus the package was deemed as safe to use. See the full health analysis review.