The npm package zousan receives a total of 2,681 downloads a week. As such, we scored zousan popularity level to be Small.

Based on project statistics from the GitHub repository for the npm package zousan, we found that it has been starred 123 times, and that 25 other projects in the ecosystem are dependent on it.

We found a way for you to contribute to the project! Looks like zousan is missing a security policy.

Further analysis of the maintenance status of zousan based on released npm versions cadence, the repository activity, and other data points determined that its maintenance is Inactive.

An important project maintenance signal to consider for zousan is that it hasn't seen any new versions released to npm in the past 12 months, and could be considered as a discontinued project, or that which receives low attention from its maintainers.

We found a way for you to contribute to the project! Looks like zousan is missing a Code of Conduct.

zousan has more than a single and default latest tag published for the npm package. This means, there may be other tags available for this package, such as next to indicate future releases, or stable to indicate stable releases.

A Lightning Fast, Yet Very Small Promise A+ Compliant Implementation

There are already several Promise implementations out there, and modern browsers even have built-in Promises, but none met my goals, which are:

Check out this blog post called A Promising Start - Embracing Speed and Elegance with Zousan Promises where I describe why and how I created this implementation.

Update: There is now an extension library with some handy functions for dealing with Promises (from Zousan or otherwise): Zousan-plus 🐘➕

2019 Update: As of version 3.0.0 we no longer define Zousan at the global level by default. (The exception being if you import the UMD version via script element without AMD present.)

Zousan is distributed both as an ES Module and as a UMD (Universal Module Definition), compliant with AMD and CommonJS module styles, as well as simple browser script includes which define Zousan globally.

Zousan is Promise A+ 1.1 compliant, so any documentation for spec-compliant promises applies to Zousan. There are a couple small additions though - see below. Briefly, the spec-compliant API is:

Create a new Promise (often, this promise is returned from a function that provides some asynchronous resource)

To use this promise to obtain the value:

Zousan does have a couple additional features which are not required by the spec, but are very useful when working with promises. Be aware that if you use this "extension" API, your code may not be compatible with other Promise implementations:

catch(onRejected) is equivalent to then(undefined, onRejected) and is just easier to identify - allowing you to adopt the pattern of always ending then chains with a catch, like so:

This pattern helps you to remember to always catch any errors produced within your promise chains. Although this isn't part of the Promise A+, it is a very common addition and is present in the ECMAScript 2015 Language Specification.

finally(fn) is equivalent to then(fn, fn) and is a convenience method for handling both resolved and rejected promises with a single handler. More important than being "convenient" is it is clear in intent - that this function will be run regardless. It is useful in promise chains that require some kind of clean-up operation such as releasing resources:

The other addition is a utility function called all() which takes an array of promises and returns a single promise that will resolve when all promises in the array resolve. The value passed to you is an array with the values from each promise respectively. If any promise within the passed array rejects, this will reject with the same error as the original rejection.

Note: The array can contain non-promises as well. They will be passed through to the resolved array as-is.

It is available by calling Zousan.all() (i.e. does not require a promise instance).

For example, to obtain data from a list of sources:

This function is also present in the ECMAScript 2015 spec.

This method returns a new promise based on the original that times out (rejects with Error("Timeout") or if specified Error(msg)) if the original promise does not resolve or reject before the time specified (in milliseconds).

Note: This has no effect on the original promise - which may still resolve/reject at a later time. This pattern allows you to create a timeout promise against any existing promise, such as one returned from an API, without disturbing the original promise:

The spec-compliant manner of resolving/rejecting a promise is to call the methods handed back to the constructor function argument, as shown in the constructor example above. Often it is more convenient (or cleaner) to resolve/reject a promise outside the constructor. For this purpose, Zousan provides resolve and reject methods right on the promise instance. So this pattern is available:

These functions create new promises and resolve or reject them with values or errors all in one convenient step.

To create a promise and resolve or reject it immediately:

By default, Zousan will log a warning message to the console if a promise is rejected and that rejection is not "caught". Generally, it is best to use the catch() pattern shown above, which will ensure all rejections are handled. If you forget, you will upset Zousan, and he will remind you.

Zousan assigns Zousan.warn to console.warn and uses that to log the uncaught rejection message. You may use an alternate handler for these warnings by assigning Zousan.warn to the function of your choice.

If you wish to suppress this warning, you can turn it off globally via:

You may also suppress the warning for a specific promise by setting the promise's handled property to true:

Q: What does "Zousan" mean?

Well, if you had a 3-year-old Japanese child, you would know, now wouldn't you!? "Zou" is the Japanese word for "Elephant". "San" is an honorific suffix placed after someone's name or title to show respect. Children (and other kawaii people) often put "san" after animal names as a sign of respect to the animals.. and just to be kawaii.

And if you need more guidance (or just enjoy these as much as I do) here is another - Zousan Da-ta!!

Q: Ok, cute - but why name it after an Elephant?

Because elephants never forget. So you can depend on them to keep their promises!

Q: Why did you write another Promise implementation?

I briefly explained why at the top of this README - but for a more detailed explanation, check out my blog post on the subject.

Q: How did you make it run so fast?

I discuss that a bit on my Zousan blog post as well.

I set up a jsperf comparison between: 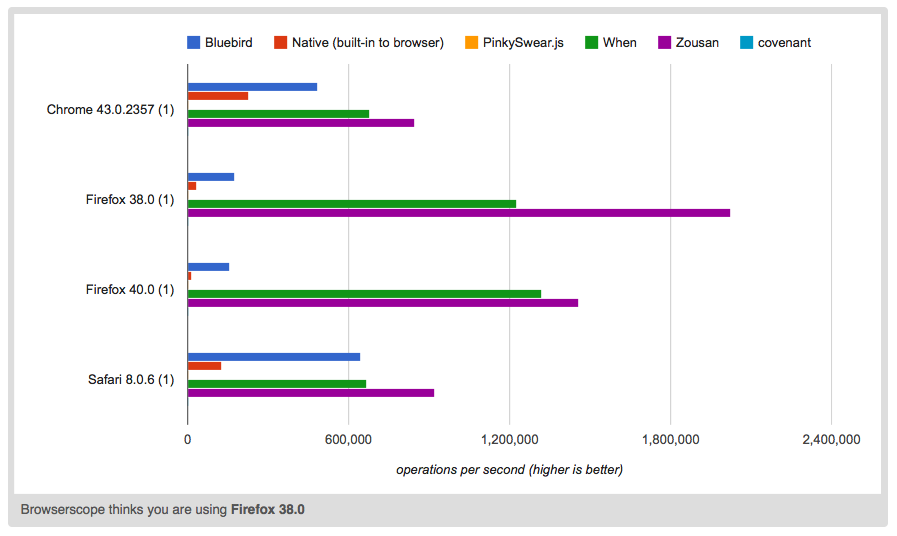 See the LICENSE file for license rights and limitations (MIT).

The npm package zousan receives a total of 2,681 weekly downloads. As such, zousan popularity was classified as small. Visit the popularity section on Snyk Advisor to see the full health analysis.

Is zousan safe to use?

The npm package zousan was scanned for known vulnerabilities and missing license, and no issues were found. Thus the package was deemed as safe to use. See the full health analysis review.

We found indications that zousan is an Inactive project. See the full package health analysis to learn more about the package maintenance status.