The npm package westures-core receives a total of 5 downloads a week. As such, we scored westures-core popularity level to be Limited.

Based on project statistics from the GitHub repository for the npm package westures-core, we found that it has been starred 3 times.

We found a way for you to contribute to the project! Looks like westures-core is missing a Code of Conduct.

Further analysis of the maintenance status of westures-core based on released npm versions cadence, the repository activity, and other data points determined that its maintenance is Inactive.

An important project maintenance signal to consider for westures-core is that it hasn't seen any new versions released to npm in the past 12 months, and could be considered as a discontinued project, or that which receives low attention from its maintainers.

westures-core has more than a single and default latest tag published for the npm package. This means, there may be other tags available for this package, such as next to indicate future releases, or stable to indicate stable releases.

This module contains the core functionality of the Westures gesture library for JavaScript. It is intended for use as a lighter-weight module to use if you do not want to use the base gestures included with the standard westures module.

Visit this page for an example of the system in action: Westures Example.

Westures aims to achieve its goals without using any dependencies, yet maintain usability across the main modern browsers. Transpilation may be necessary for this last point to be achieved, as the library is written using many of the newer features of the JavaScript language. A transpiled bundle is provided, but the browser target list is arbitrary and likely includes some bloat. In most cases you will be better off performing bundling, transpilation, and minification yourself.

There are seven classes made available by this module:

Here is a graph to help you understand the relationships between these classes: 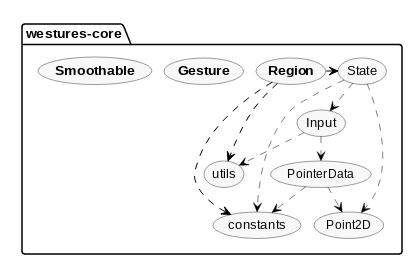 First, decide what region should listen for events. This could be the interactable element itself, or a larger region (possibly containing many interactable elements). Behaviour may differ slightly based on the approach you take, as a Region will perform locking operations on its interactable elements and their bound gestures so as to limit interference between elements during gestures, and no such locking occurs between Regions.

If you have lots of interactable elements on your page, you may find it convenient to use smaller elements as regions. Test it out in any case, and see what works better for you.

By default, the window object is used.

In order to use the engine, you'll need to define gestures. This is done by extending the Gesture class provided by this module, and overriding any or all of the four phase hooks ('start', 'move', 'end', and 'cancel') as is appropriate for your gesture.

Defined here is a very simple gesture that simply reports the centroid of the input points. Note that the returned value must be an Object!

Now for an example. Suppose you have a div within which you want to detect the Follow gesture we defined above. The div has id 'follow'. We need to find the element first.

And we also need a handler. This function will be called whenever a gesture hook returns non-null data. For Follow, this is just the move phase, but the handler doesn't need to know that. The data returned by the hook will be available inside the handler.

Now we're ready to combine the element and its handler into a gesture.

We're not quite done though, as none of this will actually work until you add the gesture to the region.

Adding a Gesture to a Region

Now the followLogger function will be called whenever a follow gesture is detected on the #follow element inside the region.

The core technique used by Westures is to process all user inputs and filter them through four key lifecycle phases: start, move, end, and cancel. Gestures are defined by how they respond to these phases. To respond to the phases, a gesture extends the Gesture class provided by this module and overrides the method (a.k.a. "hook") corresponding to the name of the phase.

The hook, when called, will receive the current State object of the region. To maintain responsiveness, the functionality within a hook should be short and as efficient as possible.

For example, a simple way to implement a Tap gesture would be as follows:

There are problems with this example, and it should probably not be used as an actual Tap gesture, it is merely to illustrate the basic idea.

The default hooks for all Gestures simply return null. Data will only be forwarded to bound handlers when a non-null value is returned by a hook. Returned values should be packed inside an object. For example, instead of just return 42;, a custom hook should do return { value: 42 };

If your Gesture subclass needs to track any kind of complex state, remember that it may be necessary to reset the state in the cancel phase.

For information about what data is accessible via the State object, see the full documentation here. Note that his documentation was generated with jsdoc.

As you can see from above, it is the gesture which decides when data gets passed to handlers, and for the most part what that data will be. Note though that a few properties will get added to the outgoing data object before the handler is called. Those properties are:

If data properties returned by a hook have a name collision with one of these properties, the value from the hook gets precedent and the default is overwritten.

In my last year of univerisity, I was working on an API for building multi-device interfaces called "WAMS" (Workspaces Across Multiple Surfaces), which included the goal of supporting multi-device gestures.

After an extensive search I found that none of the available multitouch libraries for JavaScript provided the fidelity I needed, and concluded that I would need to write my own, or at least fork an existing one. ZingTouch proved to the be the most approachable, so I decided it would make a good starting point.

The name "westures" is a mash-up of "WAMS" and "gestures".

See the changelog for the most recent updates.

If you find any issues, please let me know!

We found indications that westures-core is an Inactive project. See the full package health analysis to learn more about the package maintenance status.

Is westures-core safe to use?

The npm package westures-core was scanned for known vulnerabilities and missing license, and no issues were found. Thus the package was deemed as safe to use. See the full health analysis review.