The npm package webgme receives a total of 30 downloads a week. As such, we scored webgme popularity level to be Limited.

Based on project statistics from the GitHub repository for the npm package webgme, we found that it has been starred 115 times, and that 1 other projects in the ecosystem are dependent on it.

We found a way for you to contribute to the project! Looks like webgme is missing a security policy.

Further analysis of the maintenance status of webgme based on released npm versions cadence, the repository activity, and other data points determined that its maintenance is Sustainable.

With more than 10 contributors for the webgme repository, this is possibly a sign for a growing and inviting community.

We found a way for you to contribute to the project! Looks like webgme is missing a Code of Conduct.

webgme has more than a single and default latest tag published for the npm package. This means, there may be other tags available for this package, such as next to indicate future releases, or stable to indicate stable releases.

Note that this repository contains the full webgme app including a highly extendable graphical user interface and is the typical dependency a webgme app will depend on. To use the webgme framework without a packaged GUI - check out webgme-engine.

Create your own Domain Specific Modeling Languages (DSML) right in the browser. Specify modeling concepts, their relationships, attributes, and aspects by drawing a UML class diagram-based metamodel and WebGME automatically configures itself to support the DSML.

WebGME promotes collaboration where each change is translated into a micro-commit broadcast to all connected users. A lightweight branching scheme is transparently supported by the infrastructure. Code generators and externals tools can work on consistent snapshots (specific commits) while users can continue editing the models.

WebGME provides a variety of extension points for you to customize your application. See below for a list and explainations. All these can be neatly generated, shared and imported using a command line interface. 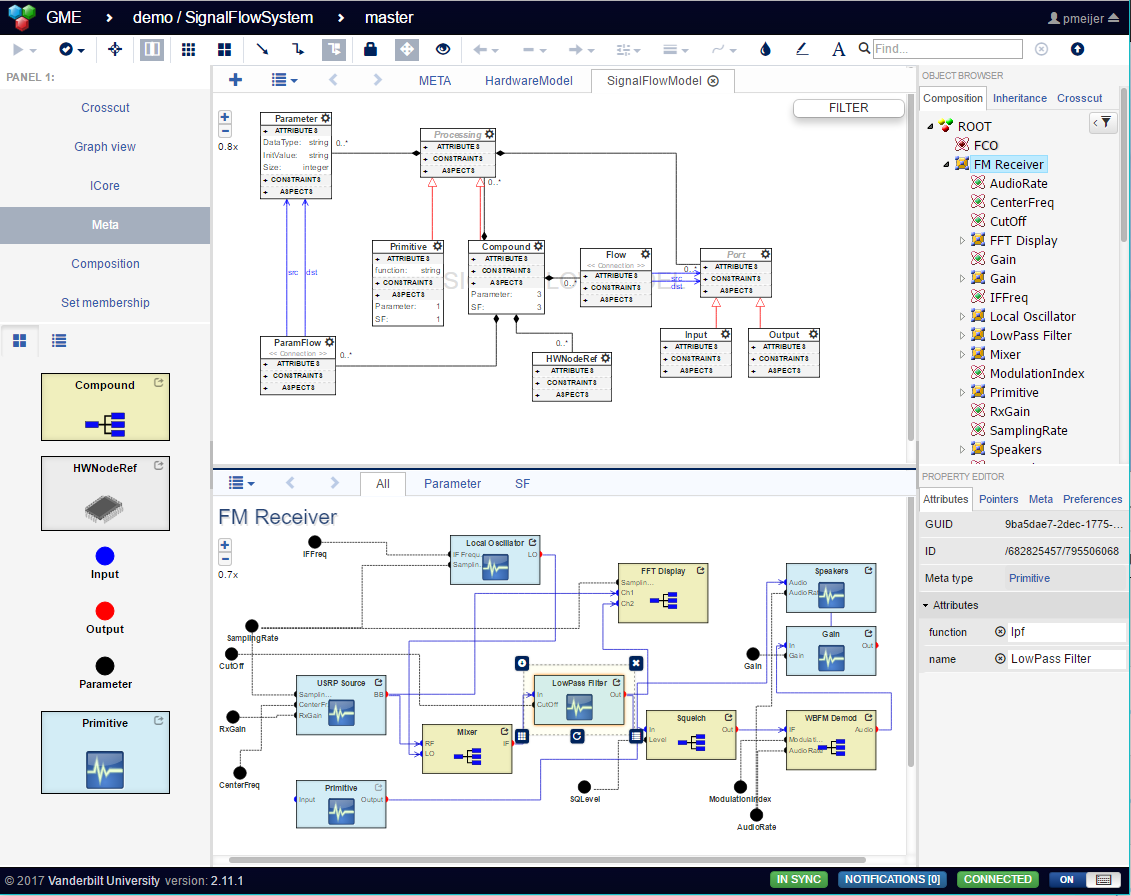 We aim to support all the major modern browsers. However we recommend using Chrome for two reasons: manual testing is mostly done using chrome and all performance profiling is done against the V8 JavaScript Engine.

You can always try out webgme at our public deployment at webgme.org. After a certain point you probably want to host your own server with custom running code and visualization. At this point follow the instructions at 1.

After the webgme server is up and there are no error messages in the console. Open a valid webgme address in the browser. The default is https://127.0.0.1:8888/, you should see all valid addresses in the console where you started webgme. To view the available documentation visit <host>/api.

The webgme-engine provides a range of bin scripts, see here for list of all.

Dist-Tags for webgme
latest next

The npm package webgme receives a total of ? weekly downloads. As such, webgme popularity was classified as limited. Visit the popularity section on Snyk Advisor to see the full health analysis.

Is webgme safe to use?

While scanning the latest version of webgme, we found that a security review is needed. A total of 29 vulnerabilities or license issues were detected. See the full security scan results.

We found indications that webgme maintenance is sustainable demonstrating some project activity. We saw a total of 20 open source contributors collaborating on the project. See the full package health analysis to learn more about the package maintenance status.