The npm package super-hands receives a total of 783 downloads a week. As such, we scored super-hands popularity level to be Limited.

Based on project statistics from the GitHub repository for the npm package super-hands, we found that it has been starred 289 times, and that 5 other projects in the ecosystem are dependent on it.

Further analysis of the maintenance status of super-hands based on released npm versions cadence, the repository activity, and other data points determined that its maintenance is Sustainable.

super-hands has more than a single and default latest tag published for the npm package. This means, there may be other tags available for this package, such as next to indicate future releases, or stable to indicate stable releases.

The goal of super-hands is to make it easy to handle user input in Web VR by providing a high-level API that is consistent across all devices. Instead of dealing directly with controller button events, raycasters, and collision detection components, you setup your scene and components instead to respond to 'gestures' like hovering and grabbing.

The currently implemented gestures are:

The family of components in this library fall into two categories:

Core: The super-hands component itself does the work of gathering events from user input devices and collision detection components to interpret them into gestures that it communicates out to the targeted entities via custom events. This component is placed on the same entities as your tracked controllers and/or your cursor raycaster.

Reaction Components: The super-hands core component alone only communicates user intent via gesture events to the entities users want to interact with; reaction components enable the interactivity on those entities. This package includes components for common reactions, hoverable, clickable, grabbable, stretchable, draggable, and droppable, and it is also designed to be easily extended with your own custom reaction components.

Install and use by directly by including the browser files:

Then require and use.

The examples page showcases a variety of configurations and use cases for super-hands.

The super-hands component is the core of the library. It communicates gesture events to entities based on user-input and entity collisions. The component is generally placed on the controller entities (or the camera for gaze interaction) and depends on a collision detection component (e.g. raycaster, aframe-extras sphere-collider, of aframe-physics-extras physics-collider) which needs to be placed on the same entity or a child entity of super-hands.

Events will be emitted by the entity being interacted with. The entity that super-hands is attached to is sent in the event detail as the property hand.

In addition to the A-Frame style gesture events, super-hands also causes standard HTML events analogous to VR interactions to be emitted by the target entities. This allows the use of these common Global Event Handler properties on entities to add reaction directly in the HTML. View the related example to see this in use.

The event passed to the handler will be a MouseEvent. At present the only property implemented is relatedTarget, which is set as listed in the table. Drag-dropping events will be dispatched on both the entity being dragged and the drop target, and the relatedTarget property for each will point to the other entity in the interaction.

Add these components to entities in your scene to make them react to super-hands gestures.

Used to indicate when the controller is within range to interact with an entity by adding the 'hovered' state.

Makes and entity move along with the controller's movement and rotation while it is grabbed. grabbable works with up-close grabbing (6DOF controllers like Vive and Oculus Touch with hand-controls and sphere-collider) and with pointing at a distance (3DOF controllers like GearVR and Daydream with laser-controls).

This works best with aframe-physics-system to manage grabbed entity movement including position and rotation, but it will fallback to manual position updates if physics is not available or is disabled with usePhysics = never.

Allows for multiple hands to register a grab on an entity. In a non-physics setup, this has no effect other than allowing smooth passing of entities between hands. With physics enabled, additional grabbing hands register their own physics constraints to allow for two-handed wielding of entities. Limit or disable this by setting the maxGrabbers schema property.

An alternative version of grabbable that registers that a button was pressed, but does not move the entity. Do not use clickable and grabbable on the same entity (just use grabbable and watch the "grabbed" state instead of "clicked")

Makes and entity rescale while grabbed by both controllers as they are moved closer together or further apart.

There is no CANNON API method for updating physics body scale, but stretchable will manually rescale shapes and offsets for stretched entity body and all descendent entity bodies. This update is throttled and will occur no more than once every physicsUpdateRate milliseconds to improve performance. Set this to a smaller number to increase the physics simulation fidelity. Currently rescalable shapes are: box and sphere. At present, this rescaling is only possible on when using the 'local' physics driver. If using another driver, setting usePhysics: never will avoid errors but also cause loss of sync between stretched entities' appearance and behavior.

draggable makes an entity able to participate in a drag and drop gesture with a droppable entity. This does not move an entity (also add grabbable for that functionality), but instead tracks whether a gesture has been made that involves pressing a button down with the controller pointed at this entity, and then moving the controller to point at another entity with the droppable component before releasing.

For interactivity, use the global event handler integration, the event-set from kframe with the drag-drop event, or create your own component.

The droppable component sets an entity up as a target to respond to dragged entities. Optionally, it can be configured to accept only specific entities and to emit custom events on acceptance or rejection.

Combining the accepts and acceptEvent property of droppable with event-set from kframe, you can create rich interactivity without any additional JavaScript or custom components.

Accept and reject events will contain the dragged entity that was accepted/rejected in the el property of detail. 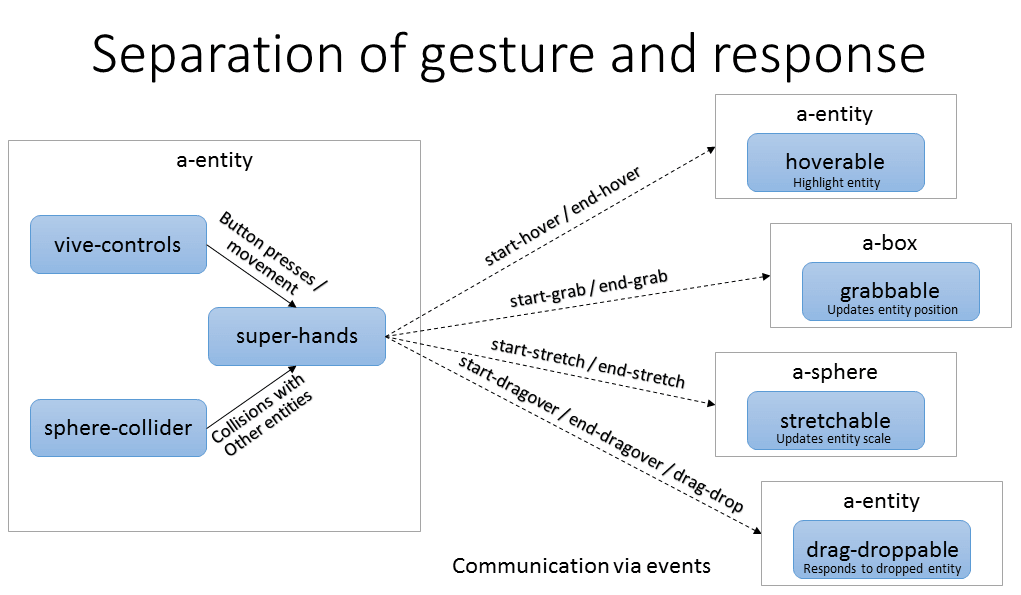 Separating the reaction to be the responsibility of the entity affected allows for extensibility. In response to a grab, you may want some entities to lock to the controller and move, others to rotate around a fixed point, and others still to spawn a new entity but remain unchanged. With this API schema, these options can be handled by adding or creating different reaction components to the entities in your scene, and super-hands can work with all of them.

There are two pathways to adding additional interactivity.

Entities which are the target of gestures communicate back to super-hands that they have accepted the attempted interaction by 'cancelling' the gesture event (i.e. calling .preventDefault() on the event). This allows super-hands to penetrate overlapping and nested entities in order to find the desired target and for reaction components to be discriminating about their conditions for interaction (e.g., droppable). All of the provided reaction components handle this signaling automatically, but, if you create your own reaction components, it is important to cancel the events when responding to a gesture so that super-hands knows the gesture has been accepted and stops searching for a viable target.

The npm package super-hands receives a total of 783 weekly downloads. As such, super-hands popularity was classified as limited. Visit the popularity section on Snyk Advisor to see the full health analysis.

We found indications that super-hands maintenance is sustainable demonstrating some project activity. We saw a total of 10 open source contributors collaborating on the project. See the full package health analysis to learn more about the package maintenance status.

Is super-hands safe to use?

The npm package super-hands was scanned for known vulnerabilities and missing license, and no issues were found. Thus the package was deemed as safe to use. See the full health analysis review.