The npm package scratchblocks receives a total of 33 downloads a week. As such, we scored scratchblocks popularity level to be Limited.

Based on project statistics from the GitHub repository for the npm package scratchblocks, we found that it has been starred 321 times, and that 0 other projects in the ecosystem are dependent on it.

With more than 10 contributors for the scratchblocks repository, this is possibly a sign for a growing and inviting community.

We found a way for you to contribute to the project! Looks like scratchblocks is missing a Code of Conduct.

Further analysis of the maintenance status of scratchblocks based on released npm versions cadence, the repository activity, and other data points determined that its maintenance is Healthy.

scratchblocks has more than a single and default latest tag published for the npm package. This means, there may be other tags available for this package, such as next to indicate future releases, or stable to indicate stable releases.

Not sure how to use scratchblocks?

To help you get started, we've collected the most common ways that scratchblocks is being used within popular public projects.

View more ways to use scratchblocks 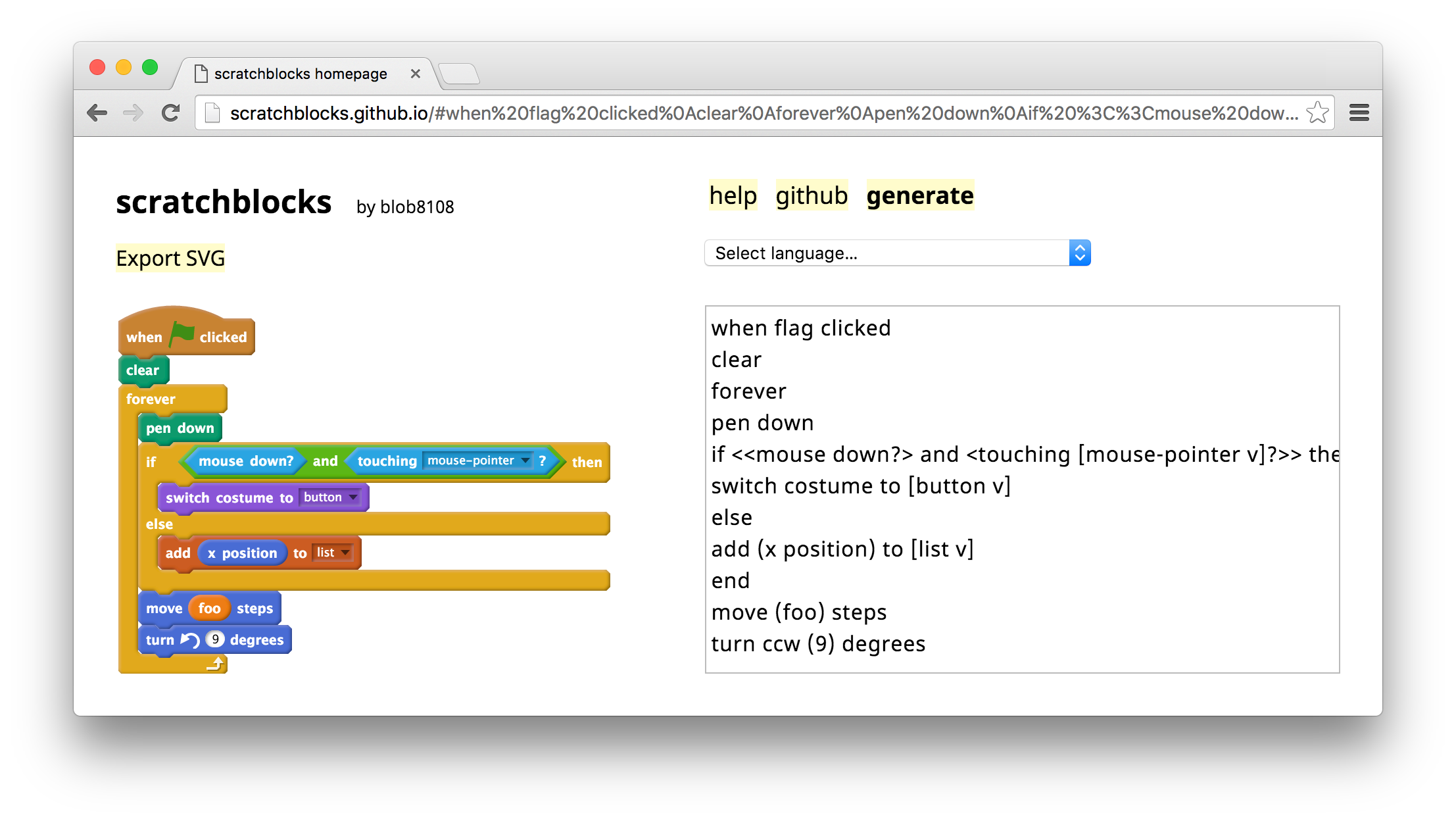 It's MIT licensed, so you can use it in your projects. (But do send me a link on Twitter!)

For the full guide to the syntax, see the wiki.

Use the MediaWiki plugin. (This is what the Scratch Wiki uses.)

I found a WordPress plugin. It might work for you; I haven't tried it.

Code Club use their own lesson_format tool to generate the PDF versions of their project guides. It uses the pandoc_scratchblocks plugin they wrote to make pictures of Scratch scripts.

This would probably be a good way to write a Scratch book.

You'll need to include a copy of the scratchblocks JS file on your webpage. There are a few ways of getting one:

The convention is to write scratchblocks inside pre tags with the class blocks:

You then need to call scratchblocks.renderMatching after the page has loaded. Make sure this appears at the end of the page (just before the closing </body> tag):

The renderMatching() function takes a CSS-style selector for the elements that contain scratchblocks code: we use pre.blocks to target pre tags with the class blocks.

The style option controls how the blocks appear, either the Scratch 2 or Scratch 3 style is supported.

You might also want to use blocks "inline", inside a paragraph:

To allow this, make a second call to renderMatching using the inline argument.

This time we use code.b to target code blocks with the class b.

If you want to use languages other than English, you'll need to include a second JS file that contains translations. The releases page includes two options; you can pick one:

The translations files are hundreds of kilobytes in size, so to keep your page bundle size down you might like to build your own file with just the languages you need.

For example, a translations file that just loads the German language (ISO code de) would look something like this:

If you're using a JavaScript bundler you should be able to build your own translations file by calling require() with the path to the locale JSON file. This requires your bundler to allow importing JSON files as JavaScript.

The scratchblocks package is published on NPM, and you can use it with browserify and other bundlers, if you're into that sort of thing.

Once you've got browserify set up to build a client-side bundle from your app code, you can just add scratchblocks to your dependencies, and everything should Just Work™.

To update the translations:

Each language requires some additional words which aren't in Scratch itself (mainly the words used for the flag and arrow images). I'd be happy to accept pull requests for those! You'll need to rebuild the translations with npm run locales after editing the aliases.

This should set you up and start a http-server for development:

Many, many thanks to the contributors!

The npm package scratchblocks receives a total of 33 weekly downloads. As such, scratchblocks popularity was classified as limited. Visit the popularity section on Snyk Advisor to see the full health analysis.

We found that scratchblocks demonstrated a healthy version release cadence and project activity. It has a community of 30 open source contributors collaborating on the project. See the full package health analysis to learn more about the package maintenance status.

Is scratchblocks safe to use?

The npm package scratchblocks was scanned for known vulnerabilities and missing license, and no issues were found. Thus the package was deemed as safe to use. See the full health analysis review.