The npm package scratch-gui receives a total of 2,269 downloads a week. As such, we scored scratch-gui popularity level to be Recognized.

Based on project statistics from the GitHub repository for the npm package scratch-gui, we found that it has been starred 3,509 times, and that 2 other projects in the ecosystem are dependent on it.

With more than 10 contributors for the scratch-gui repository, this is possibly a sign for a growing and inviting community.

We found a way for you to contribute to the project! Looks like scratch-gui is missing a Code of Conduct.

Further analysis of the maintenance status of scratch-gui based on released npm versions cadence, the repository activity, and other data points determined that its maintenance is Healthy.

scratch-gui has more than a single and default latest tag published for the npm package. This means, there may be other tags available for this package, such as next to indicate future releases, or stable to indicate stable releases.

Not sure how to use scratch-gui?

To help you get started, we've collected the most common ways that scratch-gui is being used within popular public projects.

View more ways to use scratch-gui

Scratch GUI is a set of React components that comprise the interface for creating and running Scratch 3.0 projects

This requires you to have Git and Node.js installed.

In your own node environment/application:

If you want to edit/play yourself:

You may want to add --depth=1 to the git clone command because there are some large files in the git repository history.

Running the project requires Node.js to be installed.

Open a Command Prompt or Terminal in the repository and run:

Then go to https://localhost:8601/ - the playground outputs the default GUI component

Developing alongside other Scratch repositories

Getting another repo to point to this code

If you wish to develop scratch-gui alongside other scratch repositories that depend on it, you may wish to have the other repositories use your local scratch-gui build instead of fetching the current production version of the scratch-gui that is found by default using npm install.

Here's how to link your local scratch-gui code to another project's node_modules/scratch-gui.

If you can't get linking to work right, try:

You may want to review the documentation for Jest and Enzyme as you write your tests.

NOTE: If you're a Windows user, please run these scripts in Windows cmd.exe instead of Git Bash/MINGW64.

Before running any tests, make sure you have run npm install from this (scratch-gui) repository's top level.

To run linter, unit tests, build, and integration tests, all at once:

To run unit tests in isolation:

You can run a single file of integration tests (in this example, the button tests):

Integration tests use a headless browser to manipulate the actual HTML and javascript that the repo produces. You will not see this activity (though you can hear it when sounds are played!).

Note that integration tests require you to first create a build that can be loaded in a browser:

Then, you can run all integration tests:

Or, you can run a single file of integration tests (in this example, the backpack tests):

If you want to watch the browser as it runs the test, rather than running headless, use:

When running npm install, you can get warnings about optional dependencies:

You can suppress them by adding the no-optional switch:

When installing for the first time, you can get warnings that need to be resolved:

You can check which versions are available:

You will need to install the required version:

You will need to install those as well:

If you run into npm install errors, try these steps:

You can publish the GUI to github.io so that others on the Internet can view it. Read the wiki for a step-by-step guide.

Since so much code throughout scratch-gui depends on the state of the project, which goes through many different phases of loading, displaying and saving, we created a "finite state machine" to make it clear which state it is in at any moment. This is contained in the file src/reducers/project-state.js .

It can be hard to understand the code in src/reducers/project-state.js . There are several types of data and functions used, which relate to each other:

These are names for the action which causes a state change. Some examples are:

Like this diagram of the project state machine shows, various transition actions can move us from one loading state to another: 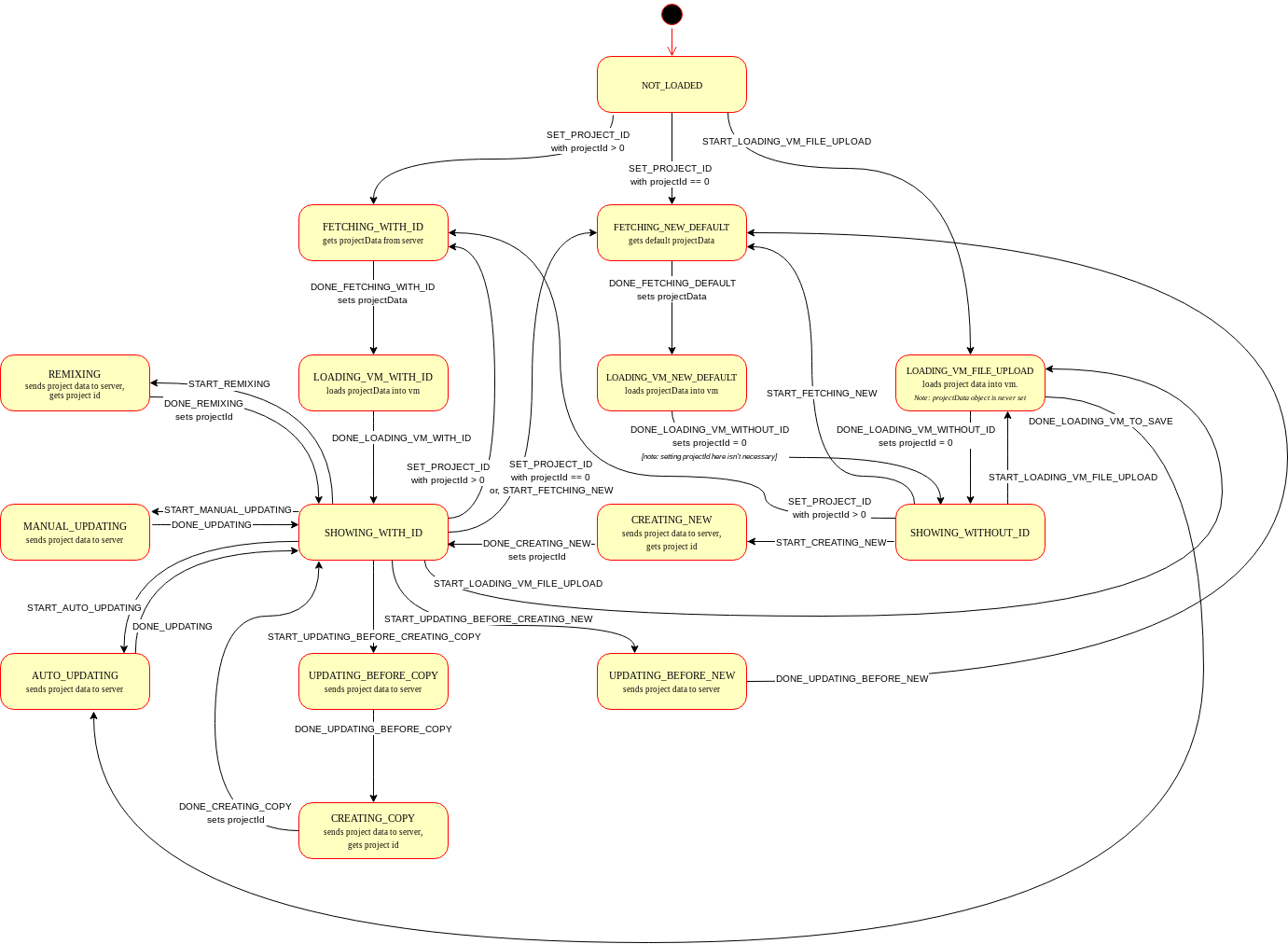 Note: for clarity, the diagram above excludes states and transitions relating to error handling.

Here's an example of how states transition.

Suppose a user clicks on a project, and the page starts to load with URL https://scratch.mit.edu/projects/123456 .

Here's what will happen in the project state machine: 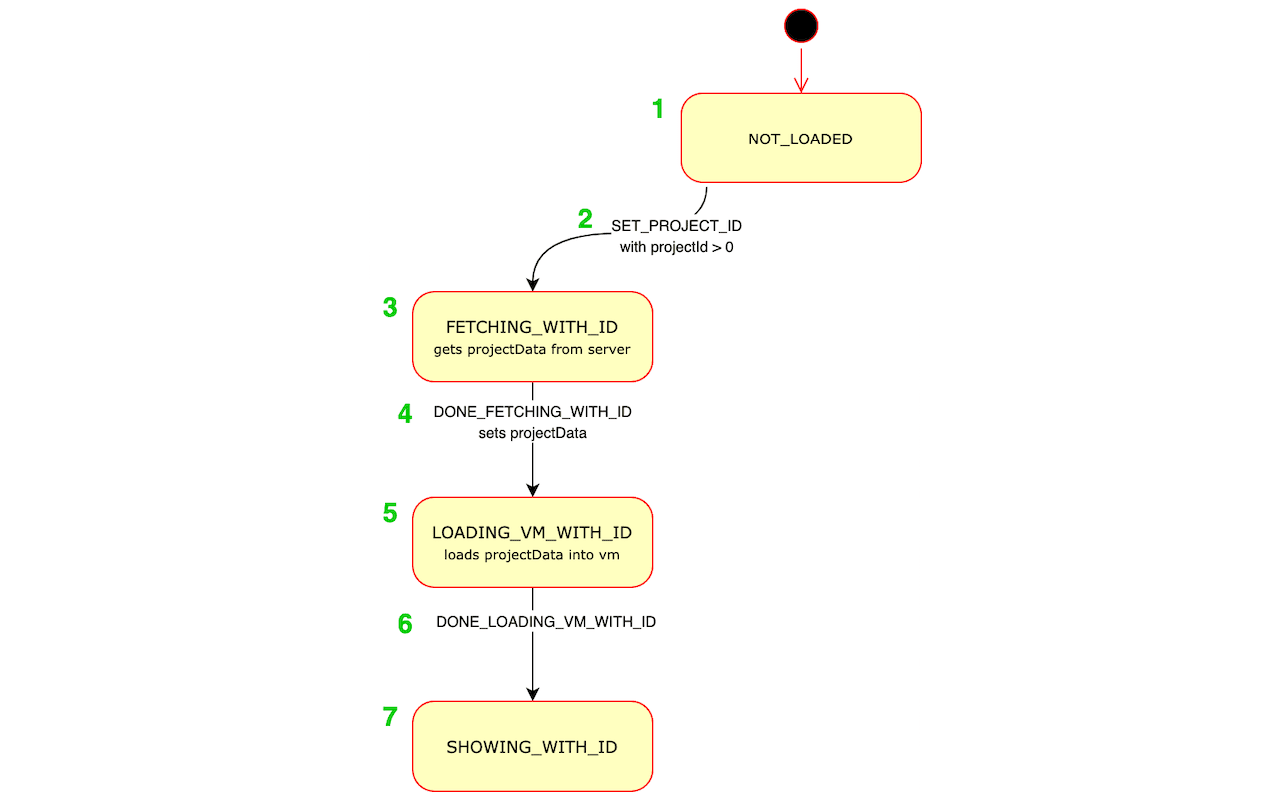 The npm package scratch-gui receives a total of 2,269 weekly downloads. As such, scratch-gui popularity was classified as a recognized. Visit the popularity section on Snyk Advisor to see the full health analysis.

We found that scratch-gui demonstrated a healthy version release cadence and project activity. It has a community of 80 open source contributors collaborating on the project. See the full package health analysis to learn more about the package maintenance status.

Is scratch-gui safe to use?

While scanning the latest version of scratch-gui, we found that a security review is needed. A total of 13 vulnerabilities or license issues were detected. See the full security scan results.