The npm package react-waypoint receives a total of 381,651 downloads a week. As such, we scored react-waypoint popularity level to be Influential project.

Based on project statistics from the GitHub repository for the npm package react-waypoint, we found that it has been starred 3,979 times, and that 272 other projects in the ecosystem are dependent on it.

With more than 10 contributors for the react-waypoint repository, this is possibly a sign for a growing and inviting community.

We found a way for you to contribute to the project! Looks like react-waypoint is missing a Code of Conduct.

Further analysis of the maintenance status of react-waypoint based on released npm versions cadence, the repository activity, and other data points determined that its maintenance is Healthy.

react-waypoint has more than a single and default latest tag published for the npm package. This means, there may be other tags available for this package, such as next to indicate future releases, or stable to indicate stable releases.

Not sure how to use react-waypoint?

To help you get started, we've collected the most common ways that react-waypoint is being used within popular public projects.

View more ways to use react-waypoint

A React component to execute a function whenever you scroll to an element. Works in all containers that can scroll, including the window.

Inspired by Waypoints, except this little library grooves the React way.

A waypoint normally fires onEnter and onLeave as you are scrolling, but it can fire because of other events too:

Callbacks will only fire if the new position changed from the last known position. Sometimes it's useful to have a waypoint that fires onEnter every time it is updated as long as it stays visible (e.g. for infinite scroll). You can then use a key prop to control when a waypoint is reused vs. re-created.

Alternatively, you can also use an onPositionChange event to just get notified when the waypoint's position (e.g. inside the viewport, above or below) has changed.

Waypoints can take a child, allowing you to track when a section of content enters or leaves the viewport. For details, see Children, below.

All callbacks (onEnter/onLeave/onPositionChange) receive an object as the only argument. That object has the following properties:

In most cases, the above two properties should be enough. In some cases though, you might find these additional properties useful:

If you use es6 object destructuring, this means that you can use waypoints in the following way:

If you are more familiar with plain old js functions, you'll do something like this:

Two of the Waypoint props are topOffset and bottomOffset. To appreciate what these can do for you, it will help to have an understanding of the "boundaries" used by this library. The boundaries of React Waypoint are the top and bottom of the element containing your scrollable content (although this element can be configured). When a waypoint is within these boundaries, it is considered to be "inside." When a waypoint passes beyond these boundaries, then it is "outside." The onEnter and onLeave props are called as an element transitions from being inside to outside, or vice versa. 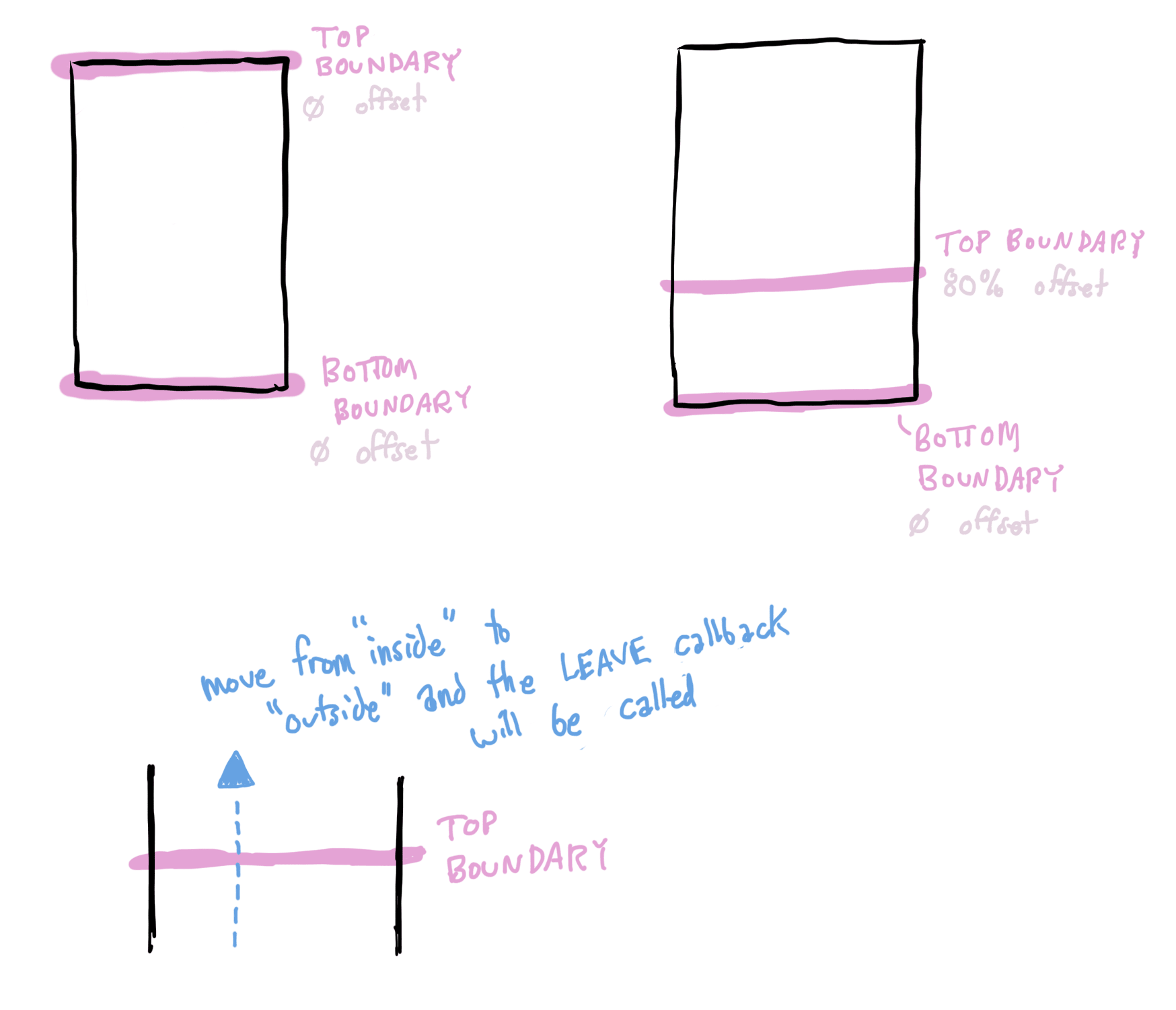 By default, waypoints listen to vertical scrolling. If you want to switch to horizontal scrolling instead, use the horizontal prop. For simplicity's sake, all other props and callbacks do not change. Instead, topOffset and bottomOffset (among other directional variables) will mean the offset from the left and the offset from the right, respectively, and work exactly as they did before, just calculated in the horizontal direction.

Positive values of the offset props are useful when you have an element that overlays your scrollable area. For instance, if your app has a 50px fixed header, then you may want to specify topOffset='50px', so that the onEnter callback is called when waypoints scroll into view from beneath the header.

Negative values of the offset prop could be useful for lazy loading. Imagine if you had a lot of large images on a long page, but you didn't want to load them all at once. You can use React Waypoint to receive a callback whenever an image is a certain distance from the bottom of the page. For instance, by specifying bottomOffset='-200px', then your onEnter callback would be called when the waypoint comes closer than 200 pixels from the bottom edge of the page. By placing a waypoint near each image, you could dynamically load them.

There are likely many more use cases for the offsets: be creative! Also, keep in mind that there are two boundaries, so there are always two positions when the onLeave and onEnter callback will be called. By using the arguments passed to the callbacks, you can determine whether the waypoint has crossed the top boundary or the bottom boundary.

If you don't pass a child into your Waypoint, then you can think of the waypoint as a line across the page. Whenever that line crosses a boundary, then the onEnter or onLeave callbacks will be called.

Waypoint needs a DOM node to compute its boundaries. When you pass a DOM component to Waypoint, it handles getting a reference to the DOM node through the ref prop automatically.

If you pass a composite component, you can wrap it with React.forwardRef (requires react@^16.3.0) and have the ref prop being handled automatically for you, like this:

If you can't do that because you are using older version of React then you need to make use of the innerRef prop passed by Waypoint to your component. Simply pass it through as the ref of a DOM component and you're all set. Like in this example:

(Note that this is measured only on a single axis. What this means is that for a Waypoint within a vertically scrolling parent, it could be off of the screen horizontally yet still fire an onEnter event, because it is within the vertical boundaries).

Deciding whether to pass a child or not will depend on your use case. One example of when passing a child is useful is for a scrollspy (like Bootstrap's). Imagine if you want to fire a waypoint when a particularly long piece of content is visible onscreen. When the page loads, it is conceivable that both the top and bottom of this piece of content could lie outside of the boundaries, because the content is taller than the viewport. If you didn't pass a child, and instead put the waypoint above or below the content, then you will not receive an onEnter callback (nor any other callback from this library). Instead, passing this long content as a child of the Waypoint would fire the onEnter callback when the page loads.

React Waypoint positions its boundaries based on the first scrollable ancestor of the Waypoint.

This can also be the string "window", which can be useful if you are using server rendering.

If your waypoint isn't working the way you expect it to, there are a few ways you can debug your setup.

OPTION 1: Add the debug={true} prop to your waypoint. When you do, you'll see console logs informing you about the internals of the waypoint.

In this component we make a few assumptions that we believe are generally safe, but in some situations might present limitations.

Credit to trotzig and lencioni for writing this component, and Brigade for open sourcing it.

Thanks to the creator of the original Waypoints library, imakewebthings.

Make sure to check out other popular open-source tools from the Brigade team: dock, overcommit, haml-lint, and scss-lint.

A React component to execute a function whenever you scroll to an element. Visit Snyk Advisor to see a full health score report for react-waypoint, including popularity, security, maintenance & community analysis.

The npm package react-waypoint receives a total of 381,651 weekly downloads. As such, react-waypoint popularity was classified as an influential project. Visit the popularity section on Snyk Advisor to see the full health analysis.

We found that react-waypoint demonstrated a healthy version release cadence and project activity. It has a community of 50 open source contributors collaborating on the project. See the full package health analysis to learn more about the package maintenance status.

Is react-waypoint safe to use?

The npm package react-waypoint was scanned for known vulnerabilities and missing license, and no issues were found. Thus the package was deemed as safe to use. See the full health analysis review.