Based on project statistics from the GitHub repository for the npm package react-universal-component, we found that it has been starred 1,695 times, and that 87 other projects in the ecosystem are dependent on it.

With more than 10 contributors for the react-universal-component repository, this is possibly a sign for a growing and inviting community.

We found a way for you to contribute to the project! Looks like react-universal-component is missing a Code of Conduct.

Further analysis of the maintenance status of react-universal-component based on released npm versions cadence, the repository activity, and other data points determined that its maintenance is Inactive.

An important project maintenance signal to consider for react-universal-component is that it hasn't seen any new versions released to npm in the past 12 months, and could be considered as a discontinued project, or that which receives low attention from its maintainers.

react-universal-component has more than a single and default latest tag published for the npm package. This means, there may be other tags available for this package, such as next to indicate future releases, or stable to indicate stable releases.

Not sure how to use react-universal-component?

To help you get started, we've collected the most common ways that react-universal-component is being used within popular public projects.

View more ways to use react-universal-component

For "power users" the traditional SPA is dead. If you're not universally rendering on the server, you're at risk of choking search engine visibility. As it stands, SEO and client-side rendering are not a match for SSR. Even though many search engines claim better SPA indexing, there are many caveats. Server-side rendering matters: JavaScript & SEO Backfire – A Hulu.com Case Study

The real problem has been simultaneous SSR + Splitting. If you've ever attempted such, you know. Here is a one-of-a-kind solution that brings it all together.

This is the final universal component for React you'll ever need, and it looks like this:

It's made possible by our PR to webpack which built support for require.resolveWeak(`'./${page}`). Before it couldn't be dynamic--i.e. it supported one module, not a folder of modules.

Dont forget to check out webpack-flush-chunks - it provides the server with info about the render so it can deliver the right assets from the start. No additional async imports on first load. It reduces time to interactive

DEFINITION: "Universal Rendering" is simultaneous SSR + Splitting, not trading one for the other.

For Typescript or environments without Babel, just copy what babel-plugin-universal-import does.

Other Packages You Will Need or Want

To be clear, you can get started with just the simple HoC shown at the top of the page, but to accomplish universal rendering, you will need to follow the directions in the webpack-flush-chunks package:

And if you want CSS chunks (which we highly recommend), you will need:

Options (all are optional):

What makes Universal Rendering so painful

One wouldn't expect it to be. Sadly the SSR part of react hasn't been as innovative as the CSR side.

If you didn't know how much of a pain in the ass universal rendering has been, check this quote from the React Router docs: 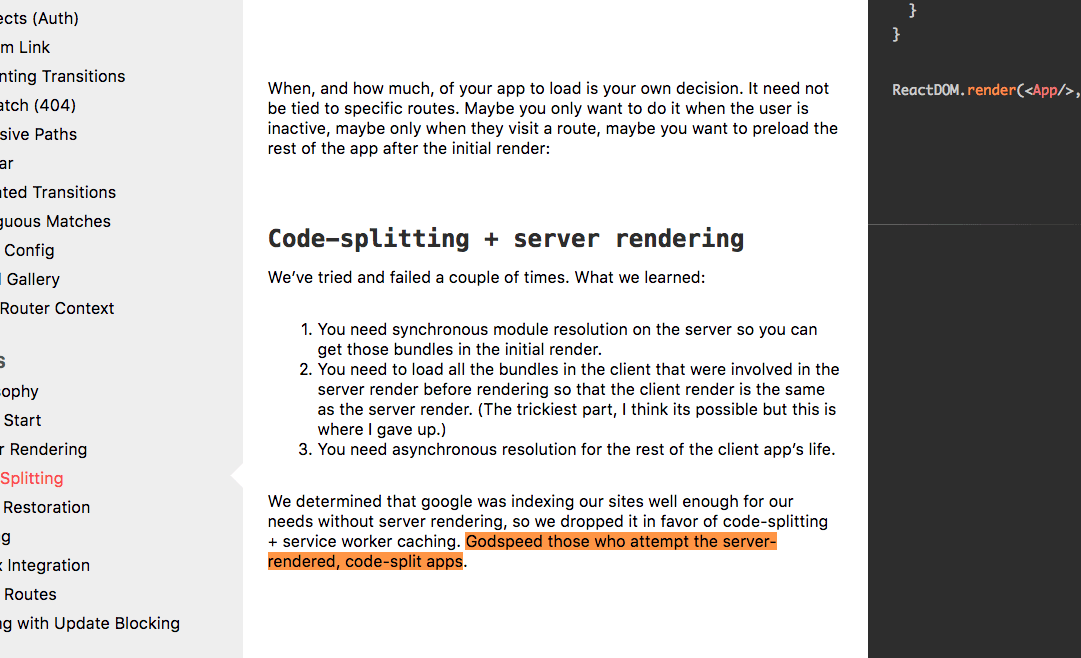 Below is the most important thing on this page. It's a quick example of the connection between this package and webpack-flush-chunks:

NOTE: this requires that the bundling and rendering happen within the same context. The module, react-universal-component/server holds a global cache of all the universal components that are rendered and makes them available via flushChunkNames

If you build step and your render step are separate (i.e. using a static site generator like react-static) we can use a Provider type component to locate the components that should be included on the client. This is not the recommended use of locating chunk names and only should be used when absolutely necessary. It uses React's context functionality to pass the report function to react-universal-component.

You can preload the async component if there's a likelihood it will show soon:

If your imported component has static methods like this:

Then this will work:

NOTE: for imports using dynamic expressions, conflicting methods will be overwritten by the current component

NOTE: preloadWeak() will not cause network requests, which means that if the component has not loaded, it will return null. Use it only when you need to retrieve and hoist the wrapped component before rendering. Calling preloadWeak() on your server will ensure that all statics are hoisted properly.

You can pass isLoading and error props to the resulting component returned from the universal HoC. This has the convenient benefit of allowing you to continue to show the same loading component (or trigger the same error component) that is shown while your async component loads AND while any data-fetching may be occuring in a parent HoC. That means less jank from unnecessary re-renders, and less work (DRY).

If it's not clear, the same loading component will show while both async aspects load, without flinching/re-rendering. And perhaps more importantly they will be run in parallel.

onBefore/After are callbacks called before and after the wrapped component loads/changes on both componentWillMount and componentWillReceiveProps. This enables you to display loading indicators elsewhere in the UI.

If the component is already cached or you're on the server, they will both be called back to back synchronously. They're both still called in this case for consistency. And they're both called before re-render to trigger the least amount of renders. Each receives an info object, giving you full flexibility in terms of deciding what to do. Here are the keys on it:

onAfter is also passed a second argument containing the imported Component, which you can use to do things like call its static methods.

Keep in mind if you call setState within these callbacks and they are called during componentWillMount, the state change will have no effect for that render. This is because the component is already in the middle of being rendered within the parent on which this.setState will be called. You can use Redux to call dispatch and that will affect child components. However, it's best to use this primarily for setting up and tearing down loading state on the client, and nothing more. If you chose to use them on the server, make sure the client renders the same thing on first load or you will have checksum mismatches. One good thing is that if you use setState, it in fact won't cause checksum mismatches since it won't be called on the server or the first render on the client. It will be called on an instant subsequent render on the client and helpfully display errors where it counts. The same won't apply with dispatch which can affect children components, and therefore could lead to rendering different things on each side.

onError is similar to the onError static option, except it operates at the component level. Therefore you can bind to this of the parent component and call this.setState() or this.props.dispatch(). Again, it's use case is for when you want to show error information elsewhere in the UI besides just the place that the universal component would otherwise render.

The reality is just having the <UniversalComponent /> as the only placeholder where you can show loading and error information is very limiting and not good enough for real apps. Hence these props.

This library supports custom rendering so that you can define rendering logic that best suits your own need. This feature has also enabled some interesting and useful usage of this library.

For example, in some static site generation setup, data are loaded as JavaScript modules, instead of being fetched from an API. In this case, the async component that you are loading is not a React component, but an JavaScript object. To better illustrate this use case, suppose that there are some data modules pageData1.js, pageData2.js, ... in the src/data folder. Each of them corresponds to a page.

All of the pageDataX.js files will be rendered with the <Page /> component below. You wouldn't want to create Page1.jsx, Page2.jsx, ... just to support the async loading of each data item. Instead, you can just define a single Page component as follows.

And define your custom rendering logic.

flushChunkNames relies on renderToString's synchronous execution to keep track of dynamic chunks. This is the same strategy used by CSS-in-JS frameworks to extract critical CSS for first render.

To use these together, simply wrap the CSS library's callback with clearChunks() and flushChunkNames():

Just like CSS-in-JS libraries, this library is not compatible with asynchronous renderToString replacements, such as react-dom-stream. Using the two together will give unpredictable results!

Some data-fetching libraries require an additional step which walks the render tree (react-apollo, isomorphic-relay, react-tree-walker). These are compatible, as long as chunks are cleared after the collection step.

Example with react-apollo and Aphrodite

We use commitizen, so run npm run cm to make commits. A command-line form will appear, requiring you answer a few questions to automatically produce a nicely formatted commit. Releases, semantic version numbers, tags, changelogs and publishing to NPM will automatically be handled based on these commits thanks to semantic-release. Be good.

Reviewing a module's tests are a great way to get familiar with it. It's direct insight into the capabilities of the given module (if the tests are thorough). What's even better is a screenshot of the tests neatly organized and grouped (you know the whole "a picture says a thousand words" thing).

Below is a screenshot of this module's tests running in Wallaby ("An Integrated Continuous Testing Tool for JavaScript") which everyone in the React community should be using. It's fantastic and has taken my entire workflow to the next level. It re-runs your tests on every change along with comprehensive logging, bi-directional linking to your IDE, in-line code coverage indicators, and even snapshot comparisons + updates for Jest! I requestsed that feature by the way 😃. It's basically a substitute for live-coding that inspires you to test along your journey. 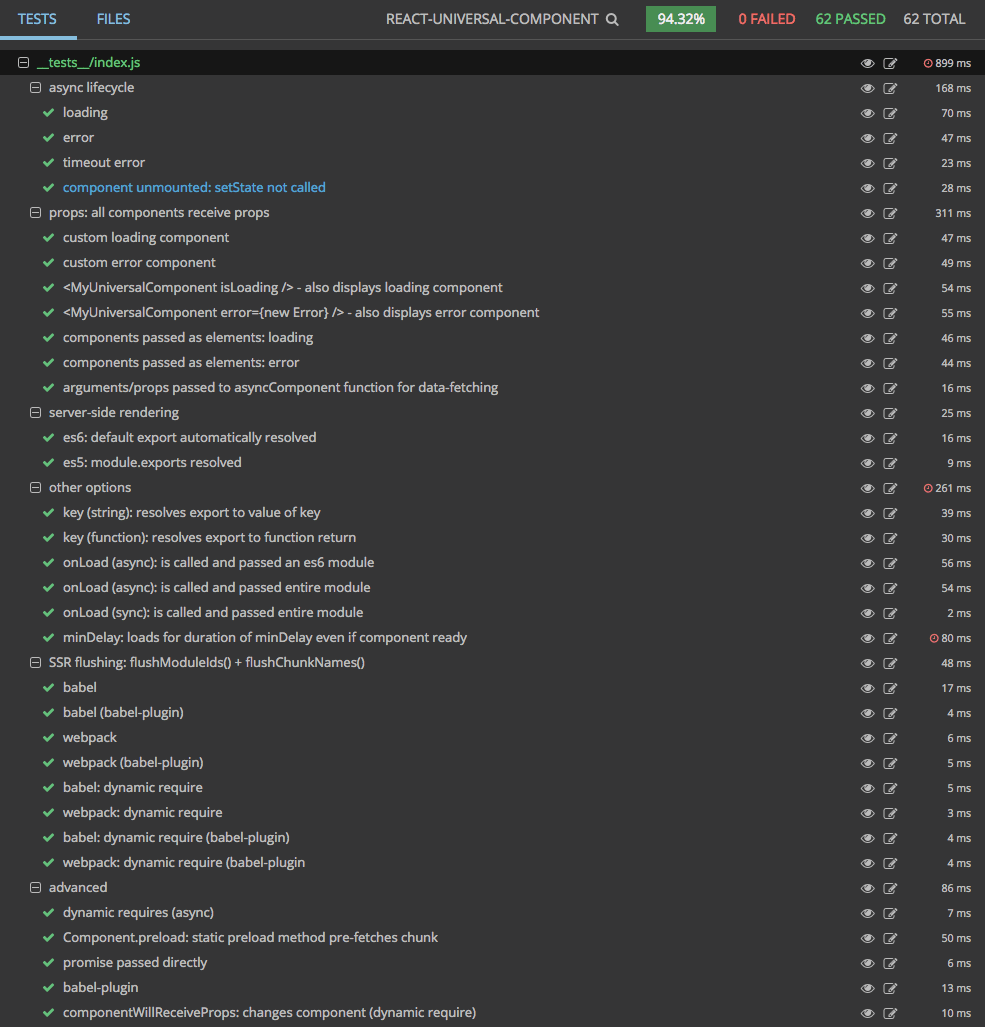 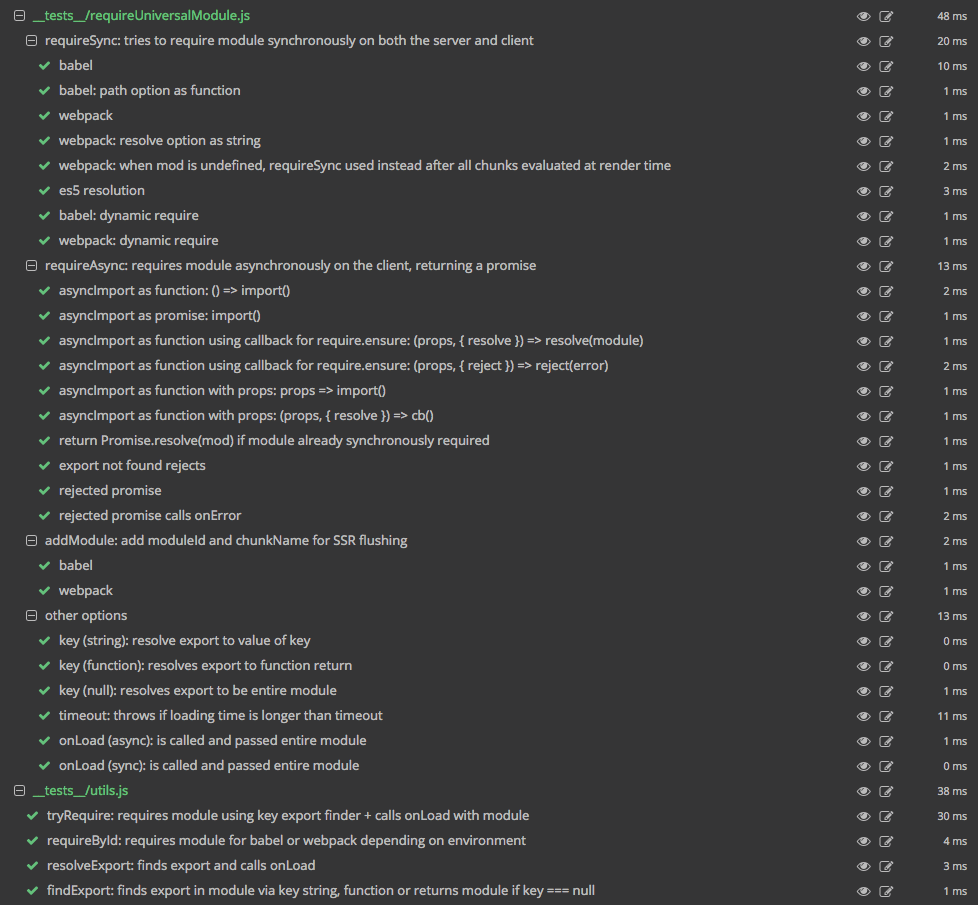 We found indications that react-universal-component is an Inactive project. See the full package health analysis to learn more about the package maintenance status.

Is react-universal-component safe to use?

The npm package react-universal-component was scanned for known vulnerabilities and missing license, and no issues were found. Thus the package was deemed as safe to use. See the full health analysis review.