Based on project statistics from the GitHub repository for the npm package node-red-contrib-countdown, we found that it has been starred 4 times, and that 0 other projects in the ecosystem are dependent on it.

We found a way for you to contribute to the project! Looks like node-red-contrib-countdown is missing a Code of Conduct.

Further analysis of the maintenance status of node-red-contrib-countdown based on released npm versions cadence, the repository activity, and other data points determined that its maintenance is Inactive.

We found that node-red-contrib-countdown demonstrates a positive version release cadence with at least one new version released in the past 12 months.

node-red-contrib-countdown has more than a single and default latest tag published for the npm package. This means, there may be other tags available for this package, such as next to indicate future releases, or stable to indicate stable releases.

The output can emit a msg at its first output with an arbitrary msg.payload contents at the start of the timer as well as at the stop of the countdown timer.
At the second Output the node emits the remaining counter value every second.

Loosely based on prior work by Neil Cherry: https://github.com/linuxha/node-red-contrib-mytimeout 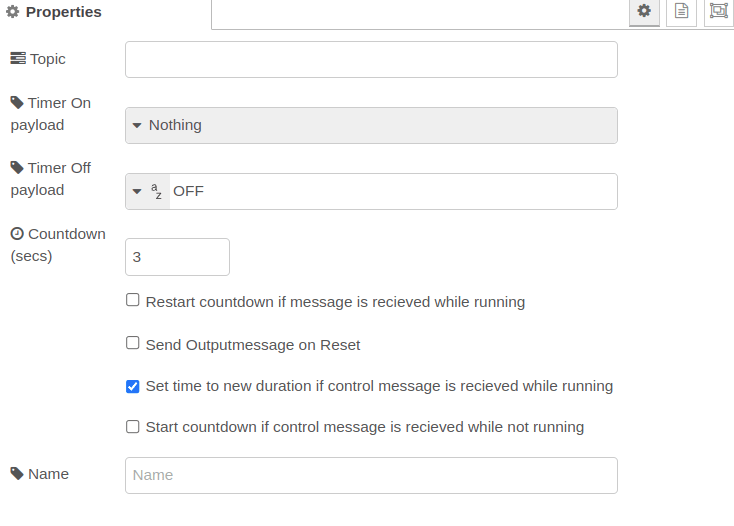 The Topic can be set to any string value. This string is added to the output msg as an additional element msg.topic.

Note: No value is given to the topic.

Timer On payload, Timer Off payload

You can configure the timer to

This example shows the basic behaviour with

Just activate the inject and look at the output debug node status messages.

This example shows how to

Text messages are output on the first output at start and end of the countdown.
You can restart the timer by activating the inject node during the countdown runs.

This example shows the two options to stop the countdown timer.

This example shows the functionality of reloading the countdown value during a running timer.

We found indications that node-red-contrib-countdown is an Inactive project. See the full package health analysis to learn more about the package maintenance status.

Is node-red-contrib-countdown safe to use?

The npm package node-red-contrib-countdown was scanned for known vulnerabilities and missing license, and no issues were found. Thus the package was deemed as safe to use. See the full health analysis review.