Based on project statistics from the GitHub repository for the npm package node-red-contrib-accesscontrol, we found that it has been starred ? times.

We found a way for you to contribute to the project! Looks like node-red-contrib-accesscontrol is missing a Code of Conduct.

Further analysis of the maintenance status of node-red-contrib-accesscontrol based on released npm versions cadence, the repository activity, and other data points determined that its maintenance is Inactive.

An important project maintenance signal to consider for node-red-contrib-accesscontrol is that it hasn't seen any new versions released to npm in the past 12 months, and could be considered as a discontinued project, or that which receives low attention from its maintainers.

node-red-contrib-accesscontrol has more than a single and default latest tag published for the npm package. This means, there may be other tags available for this package, such as next to indicate future releases, or stable to indicate stable releases.

A Node-RED implementation of the accesscontrol nmp module, providing Role Based Access Control with the addition of Attributes (see this NIST paper). Also supporting export/import to/from the MongoDB node.

Install via Node-RED Manage Palette or via npm:

A similar solution is given which does not employ context: accesscontrol-nocontext.

Detailed information about each node can be read in the help tab of Node-RED.

Permission are defined by specification of 5 properties:

This flow shows a overly simplified use case scenario.

Also, this flow shows how to combine this node with the MongoDB one.

In this section, an example of a flow containing all nodes is provided.

First, an instance of accesscontrol is generated by triggering the AC init node, in this case using an inject node.

Then, separately (or following it if the output is added to the node by checking the specific option in the properties), another injection node sends these values:

The grant node can set the options using string or by obtaining the value from the msg. In this example, it reads the injected values, granting permission of Create ANY to role user when accessing resource object. Attributes are not specified. 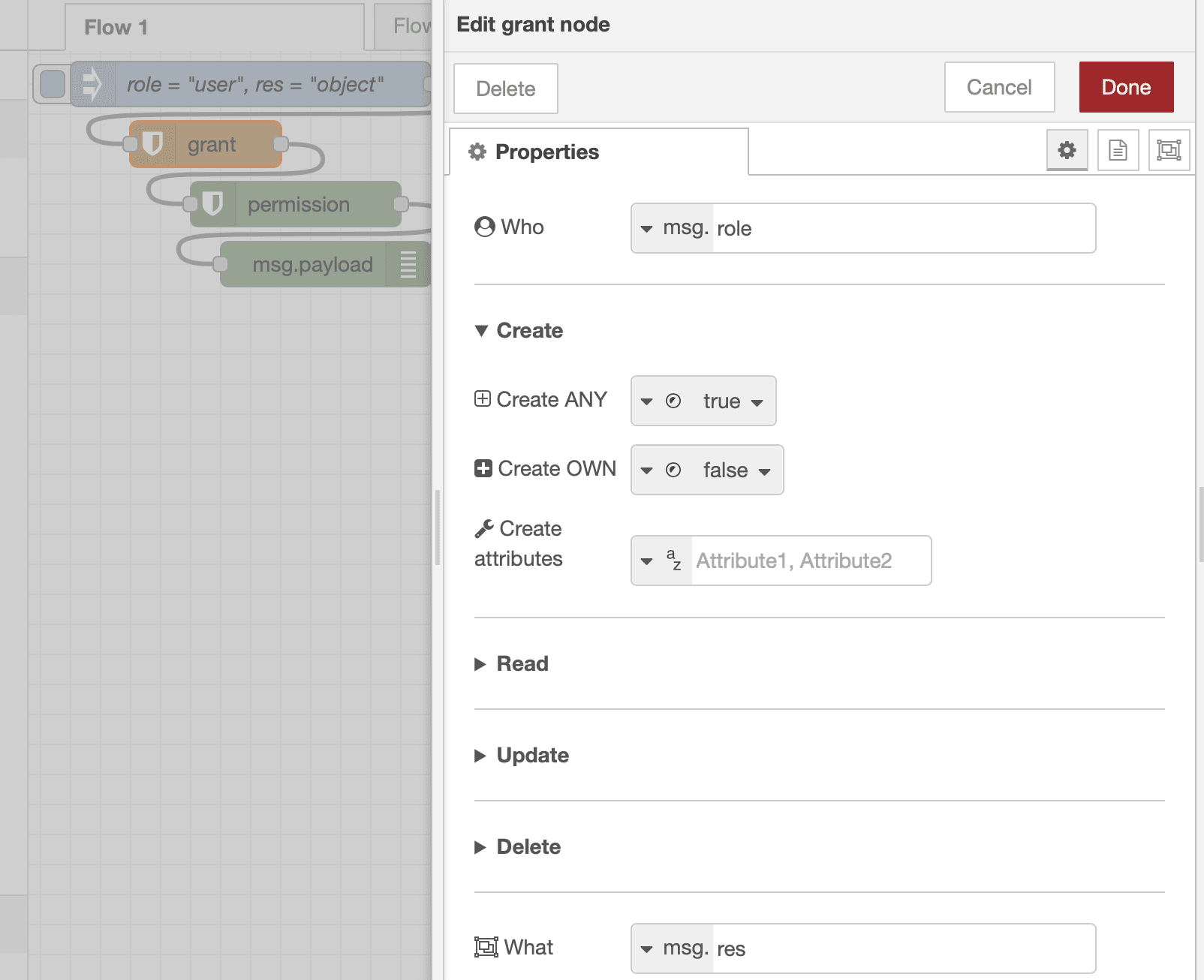 When running the inject node, the values recorded by grant are handled by the permission node, a simple implementation to test one permission per time, without attributes. If the permission is found to be correct, true is returned, as in this case, along with information about the potentially specified attributes. If it is incorrect, false is instead returned.

To check more permissions at once the permissions node can be used: this node's options resemble those of the grant node, offering the possibility to select more CRUD actions simultaneously, plus including attributes. In a new example (always in the same flow, to maintain the accesscontrol instance), a grant node adds to user permission to Read ANY and Update OWN over object. Moreover, for Update OWN some attributes are also specified. 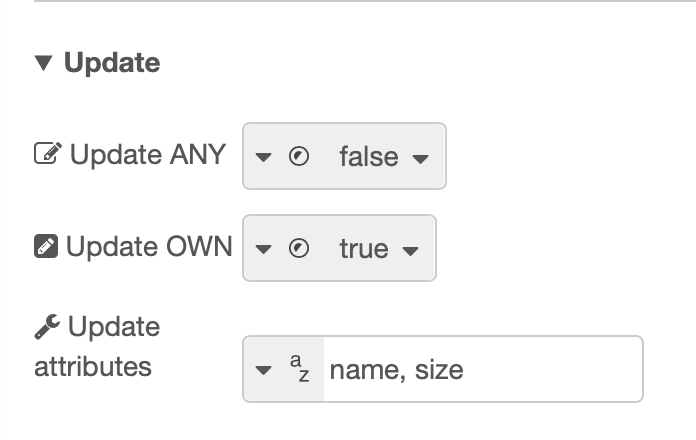 Permissions will return true if at least one of the granted conditions is provided. In those cases where Update ANY permission is checked however, also the correct attributes have to be provided (all those specified or a subgroup of them). For example, in the following figure permissions confirms that Read OWN ("OWN" is logically a subgroup of "ANY") and Update OWN with just one of the attributes is permitted. 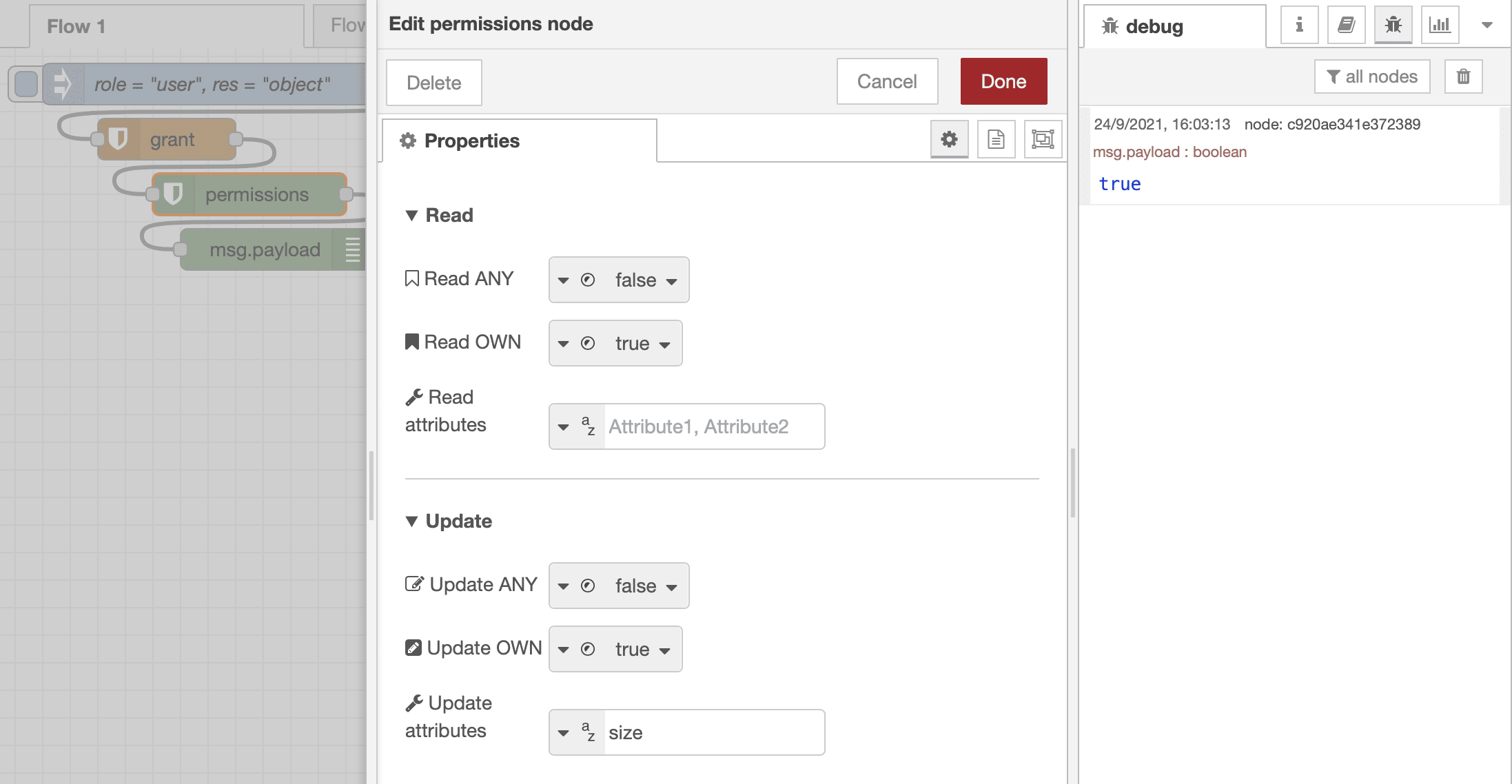 The deny node looks exactly like grant but does the opposite and does not consider attributes. When adding a deny in the previous example right after grant, that refuses permission of Update OWN, the result of the same permissions node becomes false.

In case of more roles, a role of higher hierarchy has at least the permissions of basic roles. To avoid the use of grant to specify this, the extend node can be used. In the figure, the mod role has the same permissions from user.

To remove the newly added role, the remove node can be used: it simply removes all the occurrences of either a role or a resource (or even more of them by providing a list) from the accesscontrol instance.

Finally, the AC export and AC import nodes. They do exactly what they are called, while also offering the support for MongoDB. After adding and removing again some permissions to offer a more diverse example of how these are exported, the node returns the JSON string that can be seen in the next figure.

After forcing re-initialization of accesscontrol and copying this JSON into the payload of an inject that triggers the AC import node, two permissions nodes return true when checking both user and mod for the previously listed permissions.

To block further changes to the set permissions (until a re-initialization of accesscontrol), the lock node is called. The instance cannot be unlocked. Since it is saved only in memory, changes can be made by restarting Node-RED o by forcing re-creation of the instance with AC init.

Feel free to add more options or whatever may be of use. If you find a bug, please report it on GitHub.

We found indications that node-red-contrib-accesscontrol is an Inactive project. See the full package health analysis to learn more about the package maintenance status.

Is node-red-contrib-accesscontrol safe to use?

The npm package node-red-contrib-accesscontrol was scanned for known vulnerabilities and missing license, and no issues were found. Thus the package was deemed as safe to use. See the full health analysis review.