The npm package node-dev receives a total of 47,011 downloads a week. As such, we scored node-dev popularity level to be Popular.

Based on project statistics from the GitHub repository for the npm package node-dev, we found that it has been starred 2,131 times, and that 357 other projects in the ecosystem are dependent on it.

With more than 10 contributors for the node-dev repository, this is possibly a sign for a growing and inviting community.

We found a way for you to contribute to the project! Looks like node-dev is missing a Code of Conduct.

Further analysis of the maintenance status of node-dev based on released npm versions cadence, the repository activity, and other data points determined that its maintenance is Healthy.

node-dev has more than a single and default latest tag published for the npm package. This means, there may be other tags available for this package, such as next to indicate future releases, or stable to indicate stable releases.

Node-dev is a development tool for Node.js that automatically restarts the node process when a file is modified.

In contrast to tools like supervisor or nodemon it doesn't scan the filesystem for files to be watched. Instead it hooks into Node's require() function to watch only the files that have been actually required.

This means that you don't have to configure any include- or exclude rules. If you modify a JS file that is solely used on the client-side but never run on the server, node-dev will know this and won't restart the process.

This also means that you don't have to configure any file extensions. Just require a .json file or a .ts script for example and it will be watched. Automatically.

Just run node-dev as you would normally run node:

There are a couple of command-line options that can be used to control which files are watched and what happens when they change:

All command-line arguments that are not node-dev options are passed on to the node process.

Please note: you may need to separate your script from other command line options with --, for example:

node-dev can be installed via npm. Installing it with the -g option will allow you to use it anywhere you would use node.

Status and error messages can be displayed as desktop notification using node-notifier: 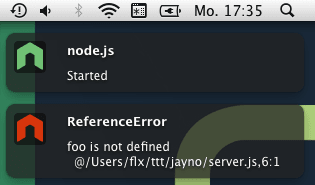 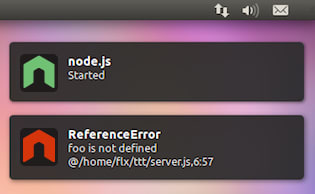 Upon startup node-dev looks for a .node-dev.json file in the following directories:

Settings found later in the list will overwrite previous options.

Usually node-dev doesn't require any configuration at all, but there are some options you can set to tweak its behaviour:

When using ESModule syntax and .mjs files, node-dev will automatically use a loader to know which files to watch.

Sometimes you need to make sure that multiple modules get exactly the same instance of a common (peer-) dependency. This can usually be achieved by running npm dedupe – however this doesn't work when you try to npm link a dependency (which is quite common during development). Therefore node-dev provides a --dedupe switch that will inject the dynamic-dedupe module into your app.

You can use node-dev to run transpiled languages like TypeScript. You can either use a .js file as entry point to your application that registers your transpiler as a require-extension manually, for example by calling CoffeeScript.register() or you can let node-dev do this for you.

There is a config option called extensions which maps file extensions to compiler module names. By default the map looks like this:

This means that if you run node-dev server.ts node-dev will do a require("ts-node/register") before running your script. You need to have ts-node installed as a dependency of your package.

Options can be passed to a transpiler by providing an object containing name and options attributes:

Node-dev sends a SIGTERM signal to the child-process if a restart is required. If your app is not listening for these signals process.exit(0) will be called immediately. If a listener is registered, node-dev assumes that your app will exit on its own once it is ready.

Windows does not handle POSIX signals, as such signals such as SIGTERM cause the process manager to unconditionally terminate the application with no chance of cleanup. In this case, the option graceful_ipc may be used. If this option is defined, the argument provided to the option will be sent as an IPC message via child.send("<graceful_ipc argument>"). The child process can listen and handle this event with:

This can be useful when you are running an isomorphic web app that shares modules between the server and the client.

The npm package node-dev receives a total of 47,011 weekly downloads. As such, node-dev popularity was classified as a popular. Visit the popularity section on Snyk Advisor to see the full health analysis.

We found that node-dev demonstrated a healthy version release cadence and project activity. It has a community of 30 open source contributors collaborating on the project. See the full package health analysis to learn more about the package maintenance status.

Is node-dev safe to use?

The npm package node-dev was scanned for known vulnerabilities and missing license, and no issues were found. Thus the package was deemed as safe to use. See the full health analysis review.