The npm package ng-video receives a total of 51 downloads a week. As such, we scored ng-video popularity level to be Limited.

Based on project statistics from the GitHub repository for the npm package ng-video, we found that it has been starred 229 times, and that 0 other projects in the ecosystem are dependent on it.

We found a way for you to contribute to the project! Looks like ng-video is missing a Code of Conduct.

Further analysis of the maintenance status of ng-video based on released npm versions cadence, the repository activity, and other data points determined that its maintenance is Inactive.

An important project maintenance signal to consider for ng-video is that it hasn't seen any new versions released to npm in the past 12 months, and could be considered as a discontinued project, or that which receives low attention from its maintainers.

ng-video has more than a single and default latest tag published for the npm package. This means, there may be other tags available for this package, such as next to indicate future releases, or stable to indicate stable releases.

ngVideo is a HTML5 video player written in Angular.js. 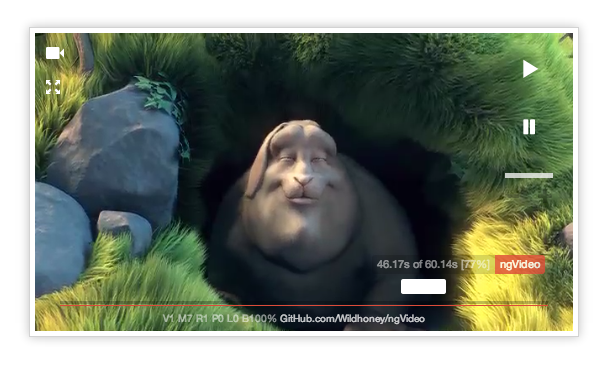 ngVideo utilises Angular.js directives extensively which compartmentalises the various components that make-up the overall ngVideo experience – meaning you get to pick and choose which components you wish to utilise.

When using ngVideo, the only required directive is the main ng-video directive which handles all of the core logic, as well as the vi-screen directive which is the player itself. All other directives are optional.

Terminology: When we mention videoModel we mean the object that is returned from addSource/save.

Starting to use ngVideo is a breeze! Firstly you must define the container which will contain your video node.

Note: You can load multi-sources for each video for fallback purposes with multiSource.

You then need to fulfill the only other requirement for ngVideo – the video node:

After that you have all that's necessary to begin playing videos – albeit without any user control.

ngVideo ships with a simple service that can be injected into your controllers, directives, services, et cetera... Since the video service is what's used for adding video sources, we'll inject video into one of our controllers:

We can then subsequently add video sources to be played. For this grab yourself a valid video source and add it:

At this point you should notice that the video is visible in the player, but not actually playing – unless you specify the autoplay attribute on the video node – for the user to begin playing the video, you need to add the vi-controls directive.

Not all browsers support the same media types, and therefore ngVideo comes bundled with a way to load multiple source types for each of your videos – ngVideo will attempt to play the first video in the source collection, and if unsupported, move to the next one, and so on.

Once you invoke the save method, the video will be either played, or added to the playlist for later.

With the buffer directive you can display a bar similar to the timeline which displays the buffered segments of the video – using the canvas element. 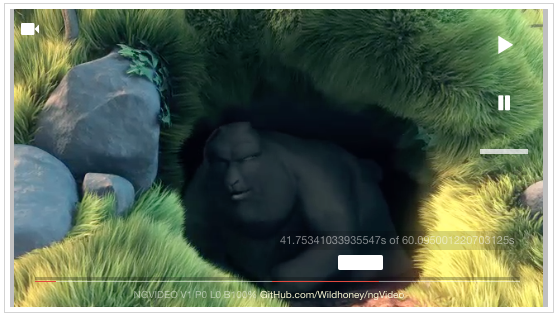 The vi-controls directive allows you to add a play button and a pause button to your player – vi-controls-play and vi-controls-pause respectively, where vi-controls serves as the parent which contains the logic.

Provides information relating to the video itself – such as the duration, loading, et cetera... By adding the vi-feedback directive to a node, your node will inherit lots of useful properties for the end user.

Currently the vi-feedback supports the following properties – as of ngVideo@0.3.0:

With the vi-full-screen directive you can open the player into full-screen mode depending on browser support.

Simply wrap the videoModel in the vi-meta directive and you will have access to the video's meta data:

With the vi-messages directive you can subscribe to all of the native video events and filter them depending on whether they're informational or a more serious error.

As well as listing the videos in the current playlist, the vi-playlist contains useful methods for traversing the playlist:

Note: You don't need to use the ng-model approach; vi-playlist has access to the open method which requires the passing in of the videoModel.

The vi-screen directive is the only mandatory directive – along with the core ng-video directive for managing the core logic. It is also one of the simplest directives, because it simply outputs the video node – with a little behaviour thrown in.

Keeping with the simplicity of the vi-screen directive, the vi-timeline is equally as simple, and contains the input – with type range for notifying the user of which position they're at in the current video/audio.

Note: For access to the volume property, it is necessary for the vi-volume directive to be a child of the vi-feedback directive.

You can inspect the ngVideoOptions object using your favourite debugger.

Below are a few of the parameters you may wish to play with:

As ng-video has a modular design, you can compile your own version of ng-video depending on the directives you wish to use.

For example if you want a simple player with the play and pause buttons, and a volume control, then including the entire ng-video module would be wasteful. Instead you could compile your own ng-video.custom.min.js using the following grunt command:

Each of the modules are separated by a comma – and three essential modules are included no matter what: Service.js, Bootstrap.js, and Screen.js.

Once you've issued the grunt custom command your custom builds – development and minified, will be present in the dist/custom directory.

ngVideo uses Jasmine with the Karma runner. All contributions to ngVideo are welcome!

Please add a unit-test for your addition – or removal, and then run all of the tests using karma start KarmaUnit.js, or with Grunt: grunt test.

Once you've committed your changes to your branch and all tests are passing, please open a pull request for review.

The npm package ng-video receives a total of 51 weekly downloads. As such, ng-video popularity was classified as limited. Visit the popularity section on Snyk Advisor to see the full health analysis.

We found indications that ng-video is an Inactive project. See the full package health analysis to learn more about the package maintenance status.

Is ng-video safe to use?

While scanning the latest version of ng-video, we found that a security review is needed. A total of 36 vulnerabilities or license issues were detected. See the full security scan results.