Based on project statistics from the GitHub repository for the npm package mocha-parallel-tests, we found that it has been starred 196 times, and that 133 other projects in the ecosystem are dependent on it.

With more than 10 contributors for the mocha-parallel-tests repository, this is possibly a sign for a growing and inviting community.

We found a way for you to contribute to the project! Looks like mocha-parallel-tests is missing a Code of Conduct.

Further analysis of the maintenance status of mocha-parallel-tests based on released npm versions cadence, the repository activity, and other data points determined that its maintenance is Inactive.

An important project maintenance signal to consider for mocha-parallel-tests is that it hasn't seen any new versions released to npm in the past 12 months, and could be considered as a discontinued project, or that which receives low attention from its maintainers.

mocha-parallel-tests has more than a single and default latest tag published for the npm package. This means, there may be other tags available for this package, such as next to indicate future releases, or stable to indicate stable releases.

ATTENTION: mocha is a peer dependency of mocha-parallel-tests so you also need to install mocha. Currently mocha versions 3, 4, 5 and 6 are supported.

Most of mocha CLI options are supported. If you're missing some of the options support you're welcome to submit a PR: all options are applied in a same simple way.

mocha-parallel-tests CLI executable has its own --max-parallel option which is the amount of tests executed at the same time. By default it's equal to the number of logical CPI cores (os.cpus().length) on your computer but you can also specify your own number or set it to 0, which means that all test files will be started executing at the same time. However this is not recommended especially on machines with low number of CPUs and big number of tests executed.

Main difference with mocha comes from the fact that all files are executed in separate processes/threads and don't share the scope. This means that even global variables values that you could've used to share the data between test suites will not be reliable. There's also some specific behaviour for some of the mocha CLI options like --bail: it's just applied to each test in its process. You can see the full list of differences here.

There's also a list of limitations that you can hit when you launch your tests with mocha-parallel-tests.

From the reporter perspective the main difference between tests executed with mocha and mocha-parallel-tests is another level of nesting which again comes from the fact that main process adds one more "suite" level and all tests results are merged into that: 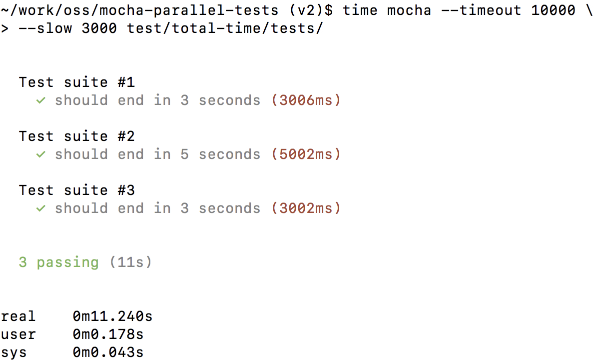 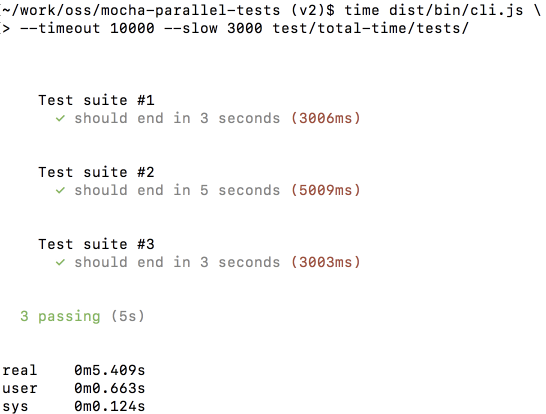 mocha.parallel is a tool which allows you to run mocha tests in parallel. While it seems pretty similar to mocha-parallel-tests there's a massive difference between them. Check this page for a full comparison.

We found indications that mocha-parallel-tests is an Inactive project. See the full package health analysis to learn more about the package maintenance status.

Is mocha-parallel-tests safe to use?

The npm package mocha-parallel-tests was scanned for known vulnerabilities and missing license, and no issues were found. Thus the package was deemed as safe to use. See the full health analysis review.