The npm package mjml receives a total of 179,198 downloads a week. As such, we scored mjml popularity level to be Influential project.

Based on project statistics from the GitHub repository for the npm package mjml, we found that it has been starred 12,060 times, and that 238 other projects in the ecosystem are dependent on it.

We found a way for you to contribute to the project! Looks like mjml is missing a security policy.

Further analysis of the maintenance status of mjml based on released npm versions cadence, the repository activity, and other data points determined that its maintenance is Healthy.

A good and healthy external contribution signal for mjml project, which invites more than one hundred open source maintainers to collaborate on the repository.

We found a way for you to contribute to the project! Looks like mjml is missing a Code of Conduct.

mjml has more than a single and default latest tag published for the npm package. This means, there may be other tags available for this package, such as next to indicate future releases, or stable to indicate stable releases.

MJML is a markup language created by Mailjet and designed to reduce the pain of coding a responsive email. Its semantic syntax makes it easy and straightforward while its rich standard components library fastens your development time and lightens your email codebase. MJML’s open-source engine takes care of translating the MJML you wrote into responsive HTML. 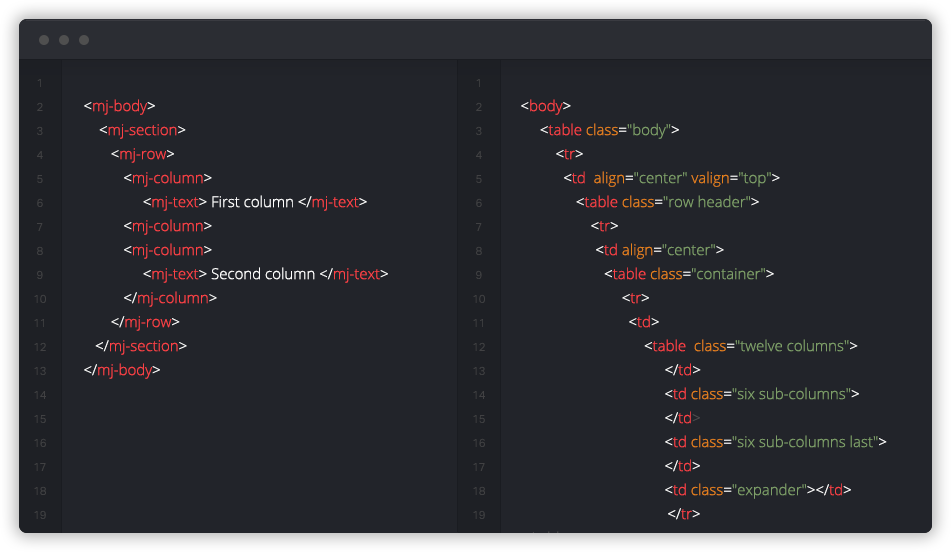 You can install MJML with NPM to use it with NodeJS or the Command Line Interface. If you're not sure what those are, head over to Usage for other ways to use MJML.

Don't want to install anything? Use the free online editor!

MJML comes with an ecosystem of tools and plugins, check out:

Compiles the file and outputs the HTML generated in output.html

You can pass optional arguments to the CLI and combine them.

You can pass optional options as an object to the mjml2html function:

A free-to-use MJML API is available to make it easy to integrate MJML in your application. Head over here to learn more about the API.

MJML wouldn't be as cool without its amazing community. Head over the Community Slack to meet fellow MJML'ers.

The npm package mjml receives a total of 179,198 weekly downloads. As such, mjml popularity was classified as an influential project. Visit the popularity section on Snyk Advisor to see the full health analysis.

Is mjml safe to use?

The npm package mjml was scanned for known vulnerabilities and missing license, and no issues were found. Thus the package was deemed as safe to use. See the full health analysis review.

We found that mjml demonstrated a healthy version release cadence and project activity. It has a community of 120 open source contributors collaborating on the project. See the full package health analysis to learn more about the package maintenance status.