The npm package meta receives a total of 1,500 downloads a week. As such, we scored meta popularity level to be Small.

Based on project statistics from the GitHub repository for the npm package meta, we found that it has been starred 1,716 times, and that 3 other projects in the ecosystem are dependent on it.

With more than 10 contributors for the meta repository, this is possibly a sign for a growing and inviting community.

We found a way for you to contribute to the project! Looks like meta is missing a Code of Conduct.

Further analysis of the maintenance status of meta based on released npm versions cadence, the repository activity, and other data points determined that its maintenance is Inactive.

An important project maintenance signal to consider for meta is that it hasn't seen any new versions released to npm in the past 12 months, and could be considered as a discontinued project, or that which receives low attention from its maintainers.

meta has more than a single and default latest tag published for the npm package. This means, there may be other tags available for this package, such as next to indicate future releases, or stable to indicate stable releases.

Not sure how to use meta?

To help you get started, we've collected the most common ways that meta is being used within popular public projects.

View more ways to use meta

meta is a tool for managing multi-project systems and libraries. It answers the conundrum of choosing between a mono repo or many repos by saying "both", with a meta repo!

meta is powered by plugins that wrap common commands, letting you execute them against some or all of the repos in your solution at once. meta is built on loop, and as such inherits loops ability to easily target a particular set of directories for executing a common command (eg meta git status --include-only dir1,dir2. See loop for more available options).

meta is packaged with a few of these core plugins by default: https://github.com/mateodelnorte/meta/blob/master/package.json#L63-L66

npm i -g meta will install a meta command on your system.

To create a new meta project:

meta will have created a .meta file to hold references to any child repositories you add.

for each project added, meta will update your .gitignore file and the .meta file with references to the new child repo 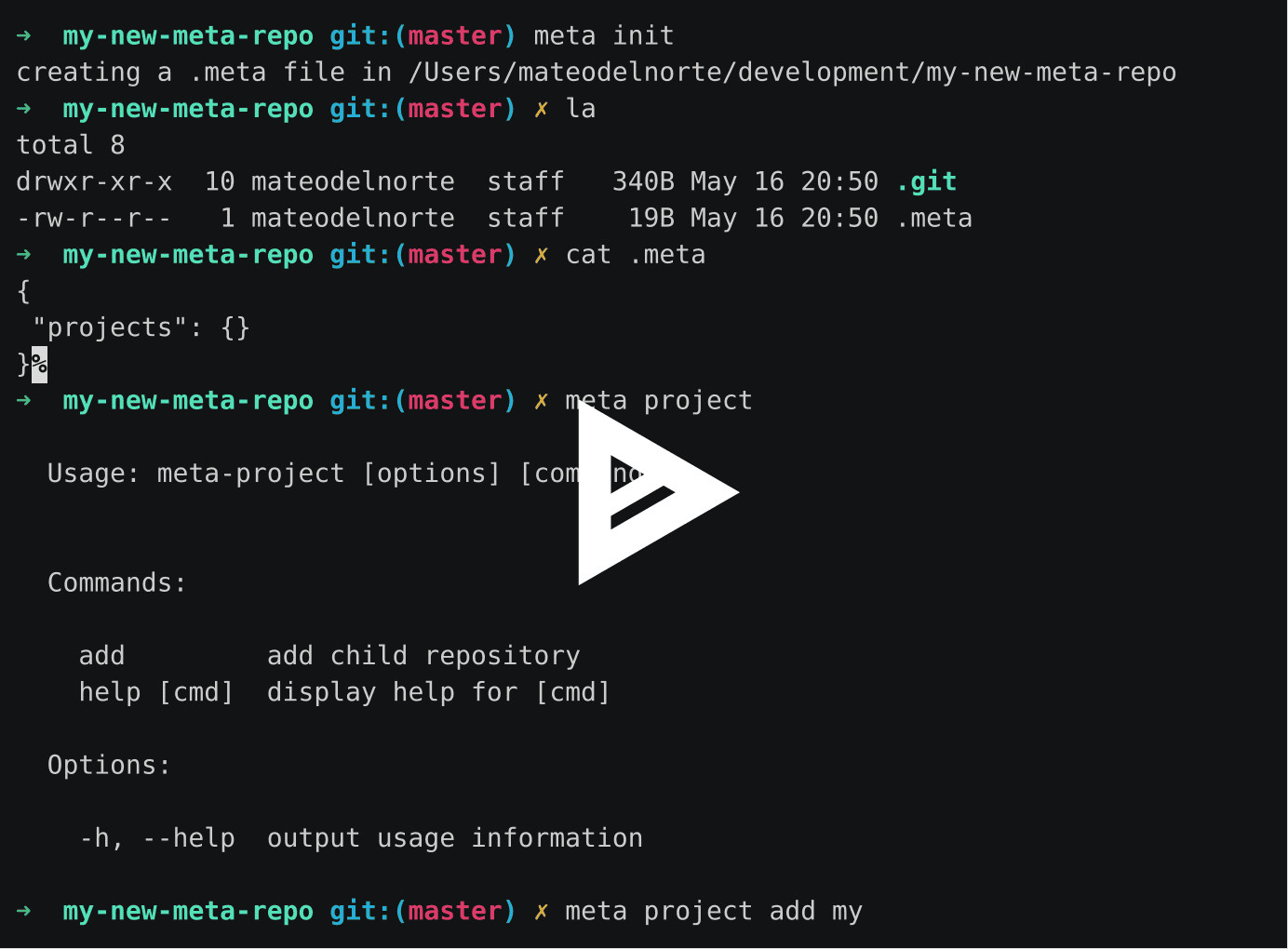 You can now perform commands against all of the repositories that make up your meta repository by using meta exec.

For example, to list all of the files in each project:

To clone an existing meta repo, rather than git clone like you are used to, simply execute meta git clone [meta repo url] instead. meta will clone your meta repo and all child repositories at once. 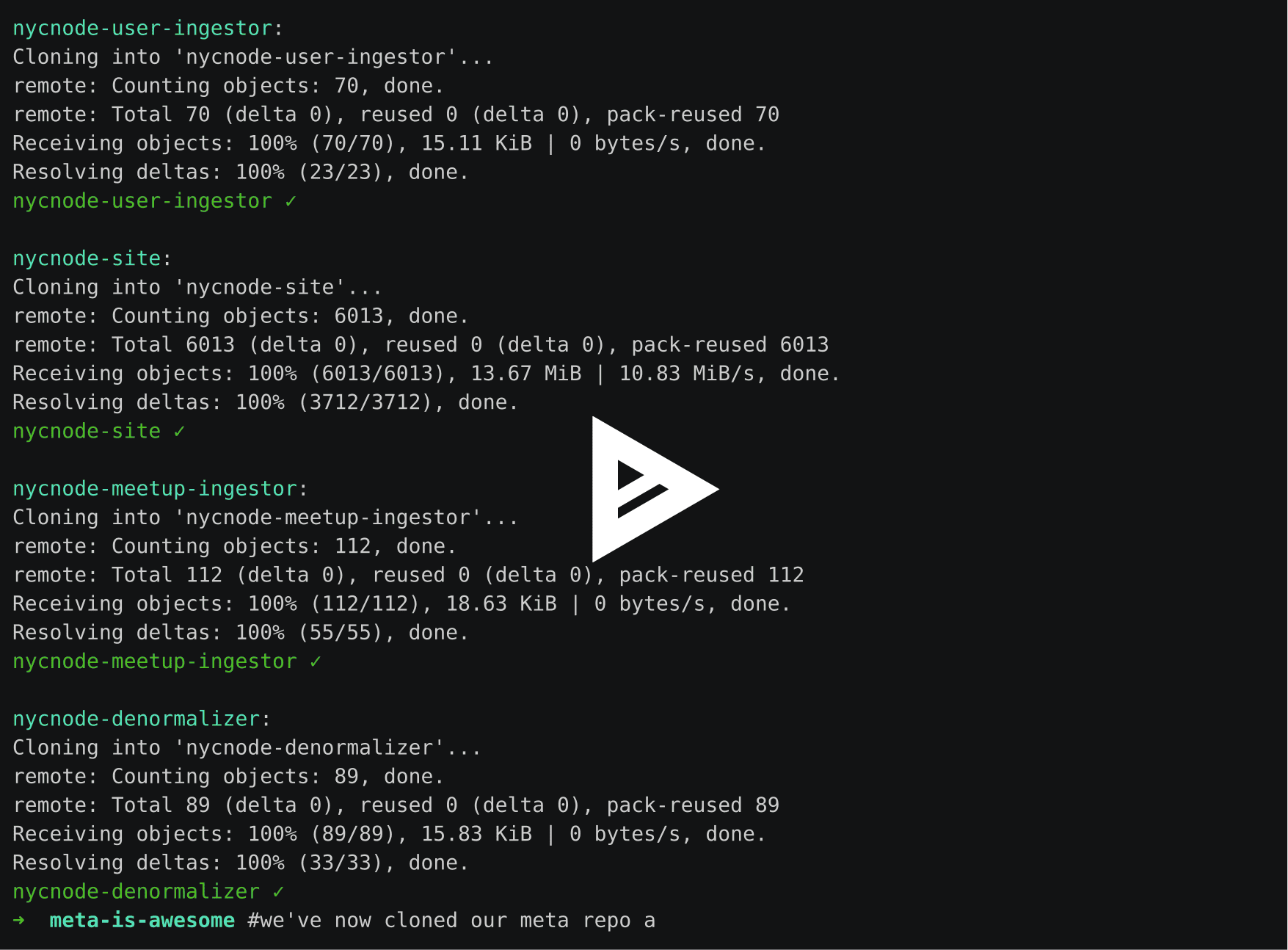 If you are working on a team and another members adds a project to the meta repository, to get the project, run meta git update.

The most basic way to interact with meta repositories is to use the meta exec command. This will let you run any command against the projects that make up your meta repo.

In many cases, that is enough. There are also special cases where the functionality provided by the initial tool wasn't quite meta-y enough, and for those, there are plugins.

Even meta-exec, itself is a plugin, but it comes with meta by default.

All meta functionality is contributed by plugins - node modules that begin with meta- and are either installed globally or in your meta repo's node_modules directory. We recommend you install them as devDependencies in your meta repo's package.json. Plugins add additional sub commands to meta, and can leverage loop or meta-loop to easily execute a common command against your meta repo and all child repos.

Here's how easy it is to install meta-npm as a plugin, and gain the ability to meta npm install all your repos at once: 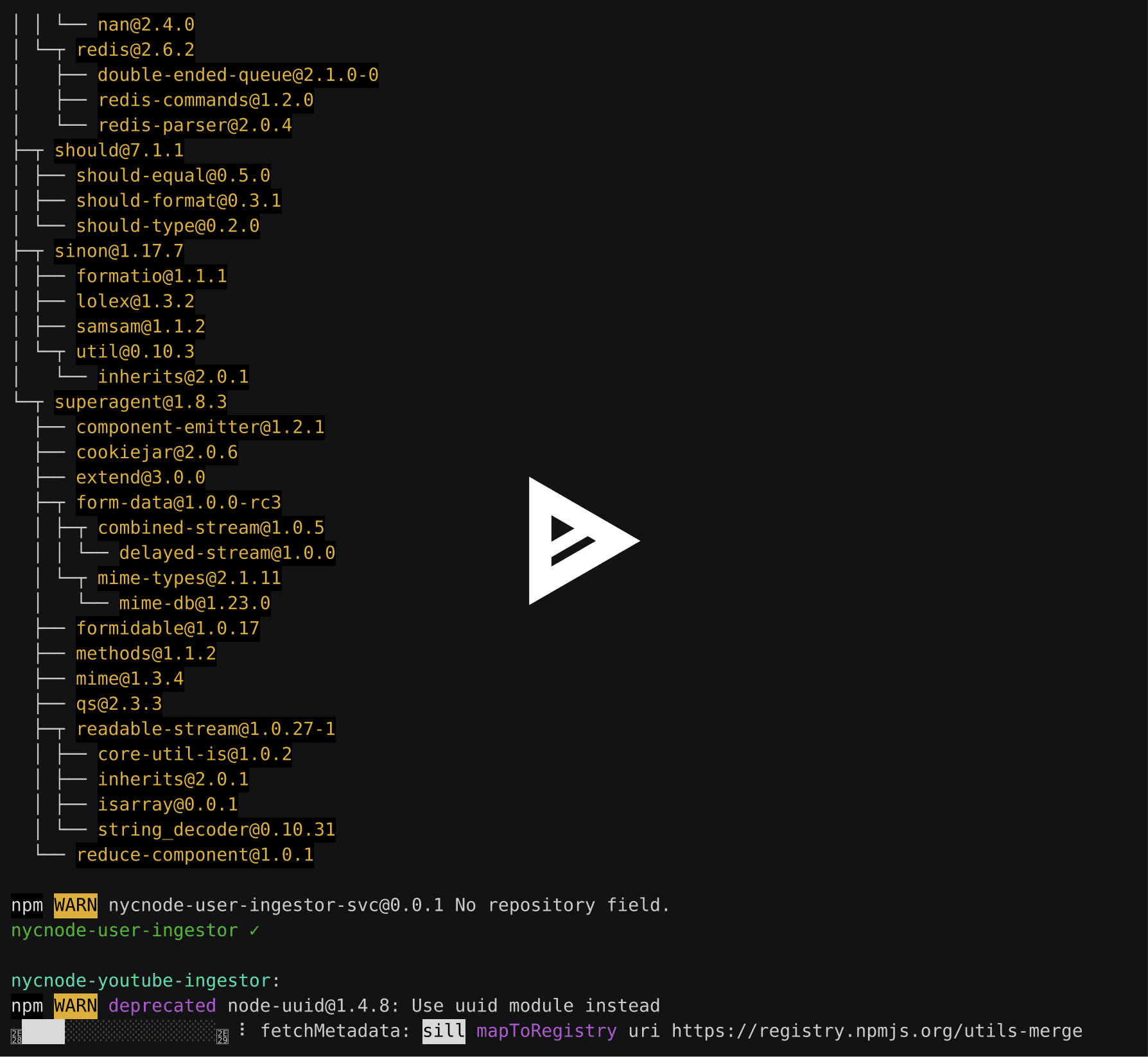 Going deeper - meta plugins are able to wrap common commands for a friendly user experience, such as meta npm install. They are also able to extend the native tool's capabilities. For example, git update is not a git command, but meta git update will clone any repos that exist in your .meta file that aren't cloned locally - a problem that doesn't exist with a single git repo.

You shouldn't have much new syntax to memorize for some crazy new utilities nobody knows about. For instance, if you want to check the git status of all your repositories at once, you can just type meta git status: 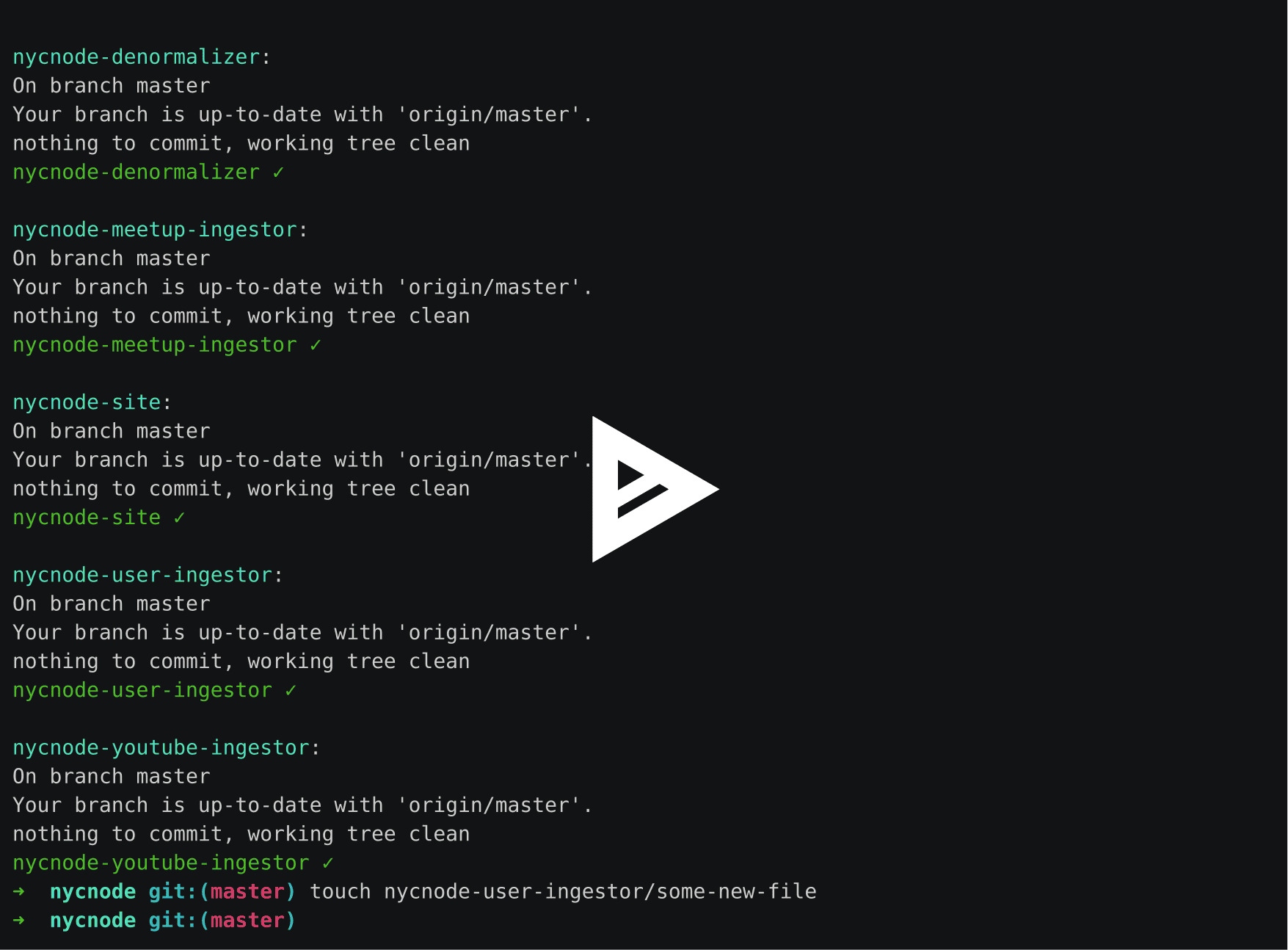 In the case a command has not been wrapped with a plugin, just use meta exec instead.

Your product consists of multiple applications and services. As the project lead, you can use meta to group together the projects so every developer is able to meta git clone a single project to get everything they need for development.

Furthermore, you could add a docker-compose file at this root level to run all of the services and applications:

The meta repo is a good place for things like this, including scripts and a Makefile that are responsible for meta things, like gettings secrets for each project, like .env files for local development.

Take this example Makefile at the root of a meta repo:

The command make onboard would start the setup task in the root and all of the child directories.

Each project can then contain a Makefile like so:

To get new projects up and running you can give them the instructions:

And they would have a fully running dev environment.

Developing a Library with many modules

Meta itself is developed with meta. This way you have a monorepo like feel while developing, but with individual components with their own release cycles.

There is admittedly now the problem of updating each repository to use the newly published versions of each other. For this, we recommend using a tool like Renovate, Dependabot, or Greenkeeper.

See this article for an example: Bring In The Bots, And Let Them Maintain Our Code!

Migrating a Monorepo to many repos

'meta project migrate' helps you move from a monorepo to a meta repo by moving directories from your existing repo into separate child repos, with git history intact. These are then referenced in your '.meta' file and cloned, making the operation transparent to your codebase.

For example, given the following monorepo structure:

Create git repos for project-a, project-b, and project-c, then run:

This will keep the git history of each subproject in tact, using some git magic:

In the eyes of the monorepo, the only thing that has changed is the .meta file, however,

If you need the monorepos structure to stay in tact for any extended duration, such as supporting legacy CI systems, you can stop here.

While in this 'migration' phase, you need to commit to the child directory's git history as well as the monorepo's git history. These commits can literally be made twice by cd-ing around or both can be made at once using 'meta git commit'.

When the monorepo no longer needs to be maintained you can simply add the migrated project to your '.gitignore'.

This will cause changes to only be tracked in the child repo, rather than both, such as during the migration phase.

How can I create a group of repositories, to, for example, run npm install on only node projects?

There are two ways to do this:

Then you can run make node-install

Can I run things in parallel?

Output is even grouped nicely together for you at the end! 😃

How to escape expressions

If you try to evaluate an expression run in meta exec, you'll notice that the expression is evaluated before being run in the target projects.

In these cases, simply escape the expression so that it is not executed until being run against each project rather than ahead of time:

The best way to get started is to do the following:

This will clone the meta project, meta, enter the directory, and then use meta to perform npm install, npm link --all in each directory listed in projects of the .meta JSON configuration file, and link meta itself to be used as a global command.

You can then write your command and test using ./bin/meta git gh [subcommand].

You can run the above as a single command:

Yarn lovers can do the same:

tool for turning many repos into a meta repo. why choose many repos or a monolithic repo, when you can have both with a... Visit Snyk Advisor to see a full health score report for meta, including popularity, security, maintenance & community analysis.

The npm package meta receives a total of 1,500 weekly downloads. As such, meta popularity was classified as small. Visit the popularity section on Snyk Advisor to see the full health analysis.

We found indications that meta is an Inactive project. See the full package health analysis to learn more about the package maintenance status.

Is meta safe to use?

While scanning the latest version of meta, we found that a security review is needed. A total of 1 vulnerabilities or license issues were detected. See the full security scan results.