Based on project statistics from the GitHub repository for the npm package jp.keijiro.klak.spout, we found that it has been starred 332 times, and that 0 other projects in the ecosystem are dependent on it.

We found a way for you to contribute to the project! Looks like jp.keijiro.klak.spout is missing a security policy.

Further analysis of the maintenance status of jp.keijiro.klak.spout based on released npm versions cadence, the repository activity, and other data points determined that its maintenance is Inactive.

We found a way for you to contribute to the project! Looks like jp.keijiro.klak.spout is missing a Code of Conduct.

jp.keijiro.klak.spout has more than a single and default latest tag published for the npm package. This means, there may be other tags available for this package, such as next to indicate future releases, or stable to indicate stable releases. 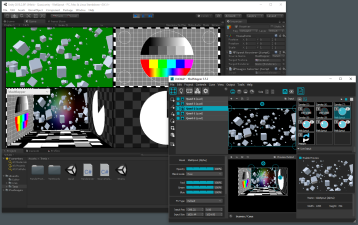 KlakSpout is a Unity plugin that allows sharing video frames with other applications using the Spout system.

Spout is a video sharing system for Windows that allows applications to share frames in real time without incurring significant performance overhead. It's supported by several applications (MadMapper, Resolume, etc.) and frameworks (Processing, openFrameworks, etc.). It works in a similar way to Syphon for Mac, and it's similarly useful for projection mapping and VJing.

To the dependencies section:

After changes, the manifest file should look like below:

The Spout Sender component (SpoutSender) is used to send frames to other Spout compatible applications.

There are two modes in Spout Sender:

The Spout Sender component runs in the camera capture mode when attached to a camera object. It automatically captures frames rendered by the camera and publishes them via Spout. The dimensions of the frames are dependent on the screen/game view size.

Note that the camera capture mode is not compatible with scriptable render pipelines. The render texture mode should be applied in case of using SRP.

The Spout Sender component runs in the render texture mode when it's independent from any camera. In this mode, the sender publishes content of a render texture that is specified in the Source Texture property. This render texture should be updated in some way -- by attaching to a camera as a target texture, by custom render texture, etc.

This controls if the sender includes alpha channel to published frames. In most use-cases of Unity, the alpha channel in rendered frames is not used and only contains garbage data. It's generally recommended to turn off the Alpha Channel Support option to prevent causing wrong effects on a receiver side.

The Spout Receiver component (SpoutReceiver) is used to receive frames published by other Spout compatible applications.

The Spout Receiver tries to connect to a sender which has a name specified in the Source Name property. Note that the search is done with exact match (case-sensitive). It can be manually edited with the text field, or selected from the drop-down labelled "Select" that shows currently available Spout senders.

The Spout Manager class (SpoutManager) only has one function: getting the list of sender names that are currently available in the system (GetSourceNames). This is useful for implementing a sender selection UI for run time use.

Please check the Source Selector example for detailed use of this function.

See issue #33 in the Spout SDK. You can download the SpoutSettings app from the thread that allows changing the maximum number of Spout senders.

Spout vs NDI: Which one is better?

The answer is simple: If you're going to use a single computer, use Spout. If you need connecting multiple computers, use NDI.

Is jp.keijiro.klak.spout safe to use?

The npm package jp.keijiro.klak.spout was scanned for known vulnerabilities and missing license, and no issues were found. Thus the package was deemed as safe to use. See the full health analysis review.

We found indications that jp.keijiro.klak.spout is an Inactive project. See the full package health analysis to learn more about the package maintenance status.