The npm package hygen receives a total of 148,226 downloads a week. As such, we scored hygen popularity level to be Influential project.

Based on project statistics from the GitHub repository for the npm package hygen, we found that it has been starred 4,670 times, and that 205 other projects in the ecosystem are dependent on it.

With more than 10 contributors for the hygen repository, this is possibly a sign for a growing and inviting community.

We found a way for you to contribute to the project! Looks like hygen is missing a Code of Conduct.

Further analysis of the maintenance status of hygen based on released npm versions cadence, the repository activity, and other data points determined that its maintenance is Sustainable.

hygen has more than a single and default latest tag published for the npm package. This means, there may be other tags available for this package, such as next to indicate future releases, or stable to indicate stable releases.

Not sure how to use hygen?

To help you get started, we've collected the most common ways that hygen is being used within popular public projects.

View more ways to use hygen 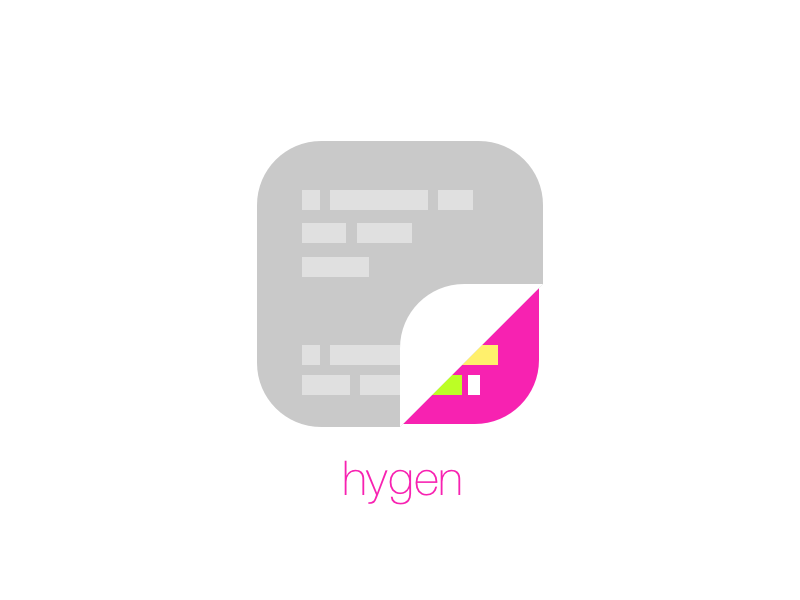 hygen is the simple, fast, and scalable code generator that lives in your project.

Hygen can be used to supercharge your workflow with Redux, React Native, Express and more, by allowing you avoid manual work and generate, add, inject and perform custom operations on your codebase.

If you're on macOS and have Homebrew:

If you have node.js installed, you can install globally with npm (or Yarn):

If you like a no-strings-attached approach, you can use npx without installing globally:

For other platforms, see releases.

Initialize hygen in your project (do this once per project):

Now you can use it:

You've generated content into the current working directory in app/. To see how the generator is built, look at _templates (which you should check-in to your project from now on, by the way).

You can build a generator that uses an interactive prompt to fill in a variable:

Use a template repo

Want to start from a repo?

Go to the documentation to get to know the rest of Hygen and generators.

If you're in a hurry:

A Different Kind of a Generator

hygen is a scalable generator. It has developer and team ergonomics as first priority.

It avoids "blessed" or dedicated projects that codifies code generation, which before you know it, become a product you build, needs testing, CI, separate pull request reviews, and ultimately sucks up your time and becomes this super hated thing no one likes to touch anymore.

Plus, since they are not the product you are building they become notoriously hard to reason about.

Scratch Your Own Itch

Because hygen templates live in your project, it cuts the time from having an itch for generating code (Redux, anyone?) in your current project to code generated with it and others benefiting from it.

hygen picks up a local _templates folder at any folder level of your project you're working from.

This is important because:

The templates folder structure maps directly to the command structure:

For this command, hygen worker new maps to _templates/worker/new and all files within worker/new are rendered.

Template parameters are given with --flag VALUE, as many as you'd like. In this example we've set a parameter named name to the value jobrunner.

A subcommand is a file inside a your folder structure. So if the structure is this:

And you only want setup, you can run:

You can also use the subcommand as a regular expression so, these will do the same:

Here's how a template looks like (in our example, index.ejs.t). Templates bodies are ejs:

The first part of the template is a front matter, idea borrowed from Markdown, this is the metadata part of a hygen template and is part of the reason of why your templates will feel more lightweight and flexible.

All frontmatter metadata are also run through the template engine so feel free to use variables in the frontmatter as you wish.

There's one required metadata variable: to. to points to where this file will be placed (folders are created as needed).

hygen provides ability to semantic case changing with change-case library, it's simple to use and very easy to understand.

There is a usecase for react based components generation:

With name HelloWorld will be compiled to:

By default templates are 'added' to your project as a new target file, but you can also choose to inject a template into an existing target file.

For this to work, you need to use inject: true with the accompanied inject-specific props.

This template will add the react-native-fs dependency into a package.json file, but it will not add it twice (see skip_if).

Here are the available mutually-exclusive options for where to inject at:

You can guard against double injection:

Also you can insert or remove empty line to injection body. That feature very useful if your editor or formatter automatically insert blank line at the end of file on save:

hygen is highly embeddable. You should be able to use it by simply listing it as a dependency and having this kind of workflow in your binary.

The Hygen codebase has a functional style where possible. This is because naturally, it feeds parameters and spits out files. Try to keep it that way.

The easiest way to make an impact is to use the built-in metaverse tests suite, and then add the tests here.

The idea here is to copy templates from any project that use hygen and to test that it works at all times. This keeps tabs on the hygen universe / ecosystem (nicknamed metaverse) and makes sure this test suite breaks before hygen clients break.

Many generators become painfully slow to use as the thing you want to generate grow (because, real life),

This is why hygen takes speed as a first class citizen, and sports a dedicated start-up timing suite:

In addition, thought is given to which dependencies to take in, how their file structure fan out and what kind of disk access (due to require) would hygen ultimately have when we run it. This is recorded with every test run.

Bundling a single file was evaluated (and the infrastructure is still there, using webpack) and wasn't faster than what we have right now.

Fork, implement, add tests, pull request, get my everlasting thanks and a respectable place here 😃.

To all Contributors - you make this happen, thanks!

The npm package hygen receives a total of 148,226 weekly downloads. As such, hygen popularity was classified as an influential project. Visit the popularity section on Snyk Advisor to see the full health analysis.

We found indications that hygen maintenance is sustainable demonstrating some project activity. We saw a total of 50 open source contributors collaborating on the project. See the full package health analysis to learn more about the package maintenance status.

Is hygen safe to use?

The npm package hygen was scanned for known vulnerabilities and missing license, and no issues were found. Thus the package was deemed as safe to use. See the full health analysis review.