Find and fix vulnerabilities in your code and dependencies, all within your IDE.

The npm package gypkg receives a total of 9 downloads a week. As such, we scored gypkg popularity level to be Limited.

Based on project statistics from the GitHub repository for the npm package gypkg, we found that it has been starred 51 times, and that 2 other projects in the ecosystem are dependent on it.

We found a way for you to contribute to the project! Looks like gypkg is missing a security policy.

Further analysis of the maintenance status of gypkg based on released npm versions cadence, the repository activity, and other data points determined that its maintenance is Inactive.

An important project maintenance signal to consider for gypkg is that it hasn't seen any new versions released to npm in the past 12 months, and could be considered as a discontinued project, or that which receives low attention from its maintainers.

We found a way for you to contribute to the project! Looks like gypkg is missing a Code of Conduct.

gypkg has more than a single and default latest tag published for the npm package. This means, there may be other tags available for this package, such as next to indicate future releases, or stable to indicate stable releases.

Please check the latest issues, or contribute gypkg-projects to the wiki.

GYP has a very lovely way to manage dependencies, however the amount of the boilerplate code required to build a project is very huge:

All of this has to be repeated in every project, but fear not - gypkg fixes this and also a dependency management problem as well.

Additionally, gypkg solves the problem with duplicate sub-dependencies (a depends on b and c; b depends on c). 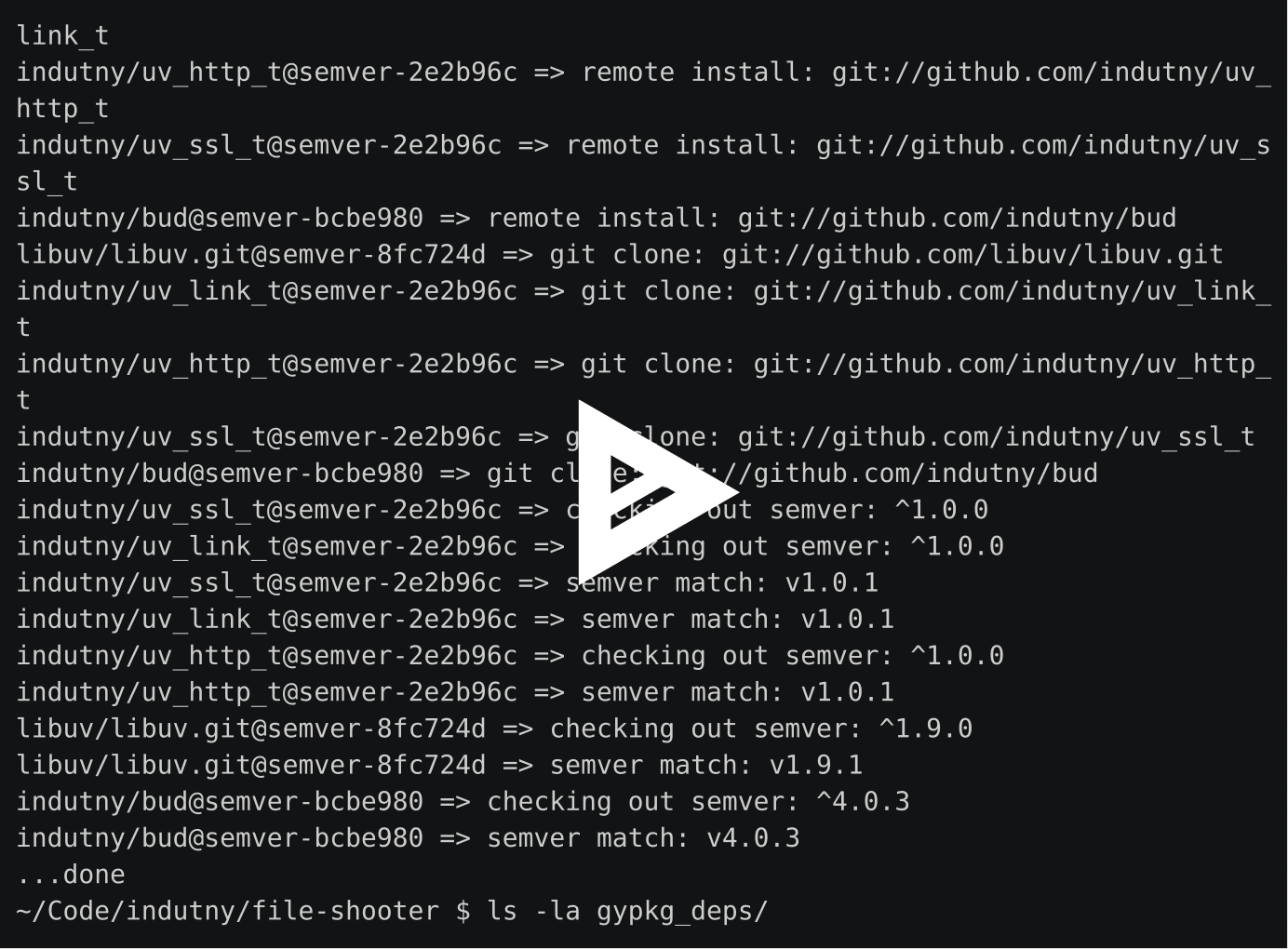 A build.gyp file for a C/C++ project may be generated with gypkg init, and will look like this:

Dependencies could be added to gypkg_deps:

Then a gypkg CLI tool can be used to build a project (NOTE: while ninja is not necessary, it is recommended for fast incremental builds):

build command will install all dependencies into gypkg_deps and will update them automatically on next build call.

The syntax for declaring dependencies is:

See Usage section above, or Examples below for particular gist of how GYP file may look like.

While Node.js implementation of gypkg loads dependencies in asynchronously and in parallel, it may be required for gypkg-based project to be distributed to the platforms without Node.js binaries.

In this case gypkg gen --freeze file.gyp can be used to generate .gypkg-freeze file, which will help ./shim/gypkg python shim in resolving all dependencies statically.

NOTE: no GPG signatures are checked in this mode, since it requires extensive Node.js-based tooling.

Permission is hereby granted, free of charge, to any person obtaining a copy of this software and associated documentation files (the "Software"), to deal in the Software without restriction, including without limitation the rights to use, copy, modify, merge, publish, distribute, sublicense, and/or sell copies of the Software, and to permit persons to whom the Software is furnished to do so, subject to the following conditions:

The above copyright notice and this permission notice shall be included in all copies or substantial portions of the Software.

THE SOFTWARE IS PROVIDED "AS IS", WITHOUT WARRANTY OF ANY KIND, EXPRESS OR IMPLIED, INCLUDING BUT NOT LIMITED TO THE WARRANTIES OF MERCHANTABILITY, FITNESS FOR A PARTICULAR PURPOSE AND NONINFRINGEMENT. IN NO EVENT SHALL THE AUTHORS OR COPYRIGHT HOLDERS BE LIABLE FOR ANY CLAIM, DAMAGES OR OTHER LIABILITY, WHETHER IN AN ACTION OF CONTRACT, TORT OR OTHERWISE, ARISING FROM, OUT OF OR IN CONNECTION WITH THE SOFTWARE OR THE USE OR OTHER DEALINGS IN THE SOFTWARE.

The npm package gypkg receives a total of 9 weekly downloads. As such, gypkg popularity was classified as limited. Visit the popularity section on Snyk Advisor to see the full health analysis.

We found indications that gypkg is an Inactive project. See the full package health analysis to learn more about the package maintenance status.

Is gypkg safe to use?

The npm package gypkg was scanned for known vulnerabilities and missing license, and no issues were found. Thus the package was deemed as safe to use. See the full health analysis review.