Based on project statistics from the GitHub repository for the npm package gulp-coverage_output, we found that it has been starred 60 times.

With more than 10 contributors for the gulp-coverage_output repository, this is possibly a sign for a growing and inviting community.

We found a way for you to contribute to the project! Looks like gulp-coverage_output is missing a Code of Conduct.

Further analysis of the maintenance status of gulp-coverage_output based on released npm versions cadence, the repository activity, and other data points determined that its maintenance is Inactive.

An important project maintenance signal to consider for gulp-coverage_output is that it hasn't seen any new versions released to npm in the past 12 months, and could be considered as a discontinued project, or that which receives low attention from its maintainers.

gulp-coverage_output has more than a single and default latest tag published for the npm package. This means, there may be other tags available for this package, such as next to indicate future releases, or stable to indicate stable releases.

Gulp coverage reporting for Node.js that is independent of the test runner

gulp-coverage generates block, line, chainable and statement coverage for Node.js JavaScript files. This is equivalent to function, statement, branch and "modified condition/decision" coverage, where a "statement" is equivalent to a "modified condition/decision". The HTML report gives summary information for the block, line and statement covereage across all the files as well as for each file.

##Chainables The chainable coverage supports Array-like chainables and will record misses where the chained member calls both receive and result-in an empty array.

##HTML report For each covered file, a chain of links is built allowing you to click through from the summary to the first and then all subsequent instances of each type of miss (line misses and statement misses). 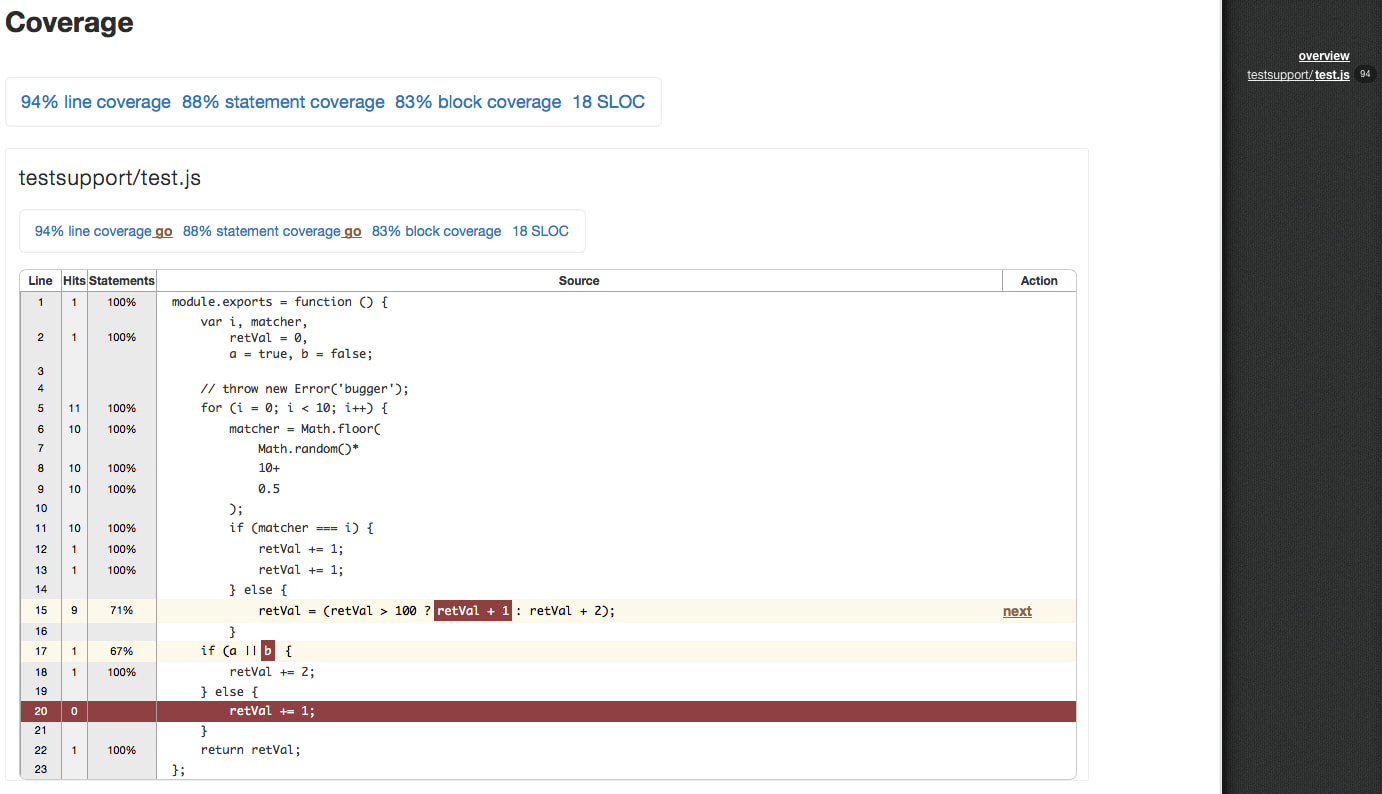 The HTML report format has been desiged to be accessible and conformant with WCAG 2 Level AA.

To exclude a single line from the coverage report, you can append a comment with the content of "cover:false" to the end of the line.

If you would like to exclude a block of code from coverage reporting, then wrap the block in a pair of comments to turn coverage off and then back on. Note that the start and end comments should be at the same indent level or the outcome will not be what you expect. To turn off the coverage, put the text "#JSCOVERAGE_IF" into a comment. To turn it back on, use a comment with one of the following texts "#JSCOVERAGE_IF 0", or "#JSCOVERAGE_ENDIF".

To instrument and report on a file using Mocha as your test runner:

To instrument and report using Jasmine as your test system:

There are five different tasks, instrument, gather, report, format and enforce. The instrument task must be run before any of the others can be called and either the gather, or the report task must be run before the enforce or the format task can be run. Enforce can follow format and should be run last if you want the reports generated even when the thresholds have not been met.

After the instrument call, the target files must be required and executed (preferably using some sort of test runner such as gulp-mocha or gulp-jasmine). This will allow the instrumentation to capture the required data (in the example above, this is done by the mocha test runner).

The gulp-coverage gather task will NOT pass any of the original stream files to the subsequent tasks. It must therefore be called after all other stream transformations have occurred.

pattern - A multimatch glob pattern or list of glob patterns. The globa patterns are relative to the CWD of the process running the gulp file. The pattern 'index.js' will match the index.js file in the same directory as the gulpfile. Globs for file relative to this directory may contain the './'. For example './index.js' is equivalent to 'index.js' (you can also use '**/index.js' to match this file but this will match any other index.js files within the project's directory structure).

The patterns can include match and exclude patterns. In the Mocha and Jasmine examples shown above, there are two JavaScript files test.js and test2.js that are required by the two test files src.js and src2.js. The ** will match these files no matter which directory they live in. Patterns are additive while negations (eg ['/foo*', '!/node_modules//*']) are based on the current set. Exception is if the first pattern is negation, then it will get the full set, so to match user expectation (eg. ['!/foo*'] will match everything except a file with foo in its name). Order matters.

debugDirectory - a string pointing to a directory into which the instrumented source will be written. This is useful for debugging gulp-coverage itself

The format of the JSON structure is a Modified LCOV format. The format has been modified to make it much easier for a template engine like JADE or HAML to generate decorated source code output.

Each file has the following structure

Source contains line objects which have the following structure

Each statement segment has the following structure

The enforce task can be used to emit an error (throw an exception) when the overall coverage values fall below your specified thresholds. The default thesholds are 100% for all metrics. This task is useful if you would like the Gulp task to fail in a way that your CI or build system can easily detect.

If you would like to specify thresholds lower than 100%, pass in the thresholds in the first argument to the task. The defaults are:

If uncovered is undefined, no threshold will be defined, otherwise it must be an integer of the number of files that are allowed to not be covered. Setting this to 0 will enforce that there are no uncovered files that match the patterm passed into the instrument task.

The format task can be used to generate a textual, formatted version of the coverage data and emit this to the Gulp stream. By default, it will call the 'html' formatter (currently only 'html' and 'json' are supported). It will add the formatted text the stream. After calling both gather and format, the stream will contain a vinyl file with an additional attribute called coverage, that contains the JSON formatted data.

You must call gather prior to calling format.

The task takes one optional argument that is either an object that contains the options, or is an array of objects that contain options. If the argument is an array, then two vinyl files will be created and added to the gulp stream.

There are 3 options, here are the default values:

Output logs a summary of the coverage report to the console if set to true.

Calling format with the following arguments will all create two vinyl files in the gulp stream that have a path of coverage.html and coverage.json respectively:

This task is deprecated because it does not support the gulp.dest task and will probably be removed before the first 1.0.0 release. Use The Gather Task and The Format Task instead.

Report will generate the reports for the instrumented files and can only be called after instrument has been called. It will also change the stream content for the tasks and pass through the LCOV JSON data so that the enforce task can be run.

reporter - defaults to 'html' - this is the name of the reporter to use. Currently there are an HTML reporter ('html') and a JSON ('json') reporter.

We found indications that gulp-coverage_output is an Inactive project. See the full package health analysis to learn more about the package maintenance status.

Is gulp-coverage_output safe to use?

While scanning the latest version of gulp-coverage_output, we found that a security review is needed. A total of 20 vulnerabilities or license issues were detected. See the full security scan results.