Based on project statistics from the GitHub repository for the npm package generator-jhipster-kafka, we found that it has been starred 27 times, and that 0 other projects in the ecosystem are dependent on it.

Further analysis of the maintenance status of generator-jhipster-kafka based on released npm versions cadence, the repository activity, and other data points determined that its maintenance is Inactive.

An important project maintenance signal to consider for generator-jhipster-kafka is that it hasn't seen any new versions released to npm in the past 12 months, and could be considered as a discontinued project, or that which receives low attention from its maintainers.

generator-jhipster-kafka has more than a single and default latest tag published for the npm package. This means, there may be other tags available for this package, such as next to indicate future releases, or stable to indicate stable releases.

A JHipster module that generates Apache Kafka consumers and producers and more!

You can have more details about work in progress in issues: 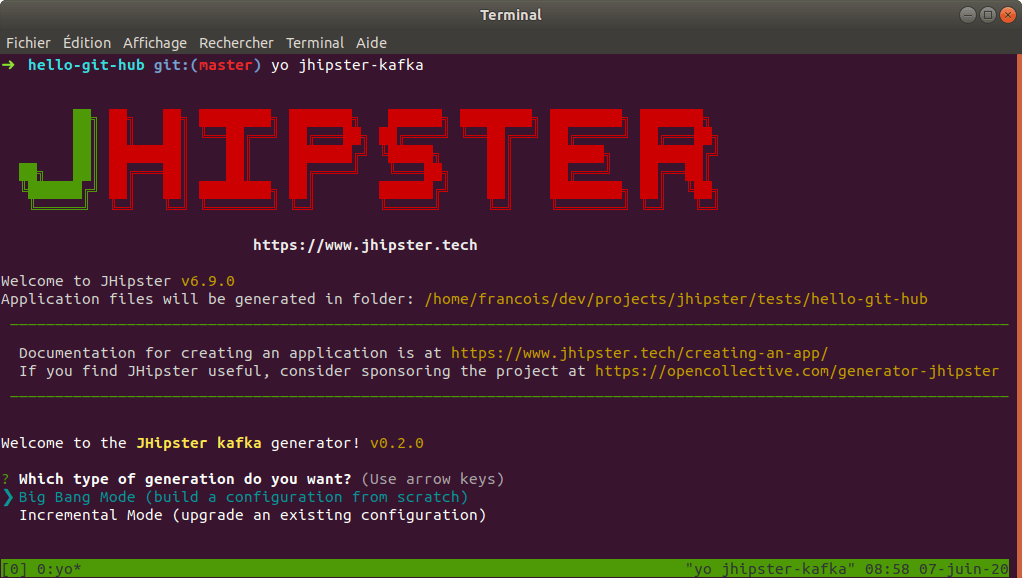 As this is a JHipster module, we expect you have JHipster and its related tools already installed:

⚠️ If you're using last version of the module or by linking package on master branch you should be using JHipster last version (main branch which is actually wip next release v7). If you want to use JHipster v6 you will have to use v6.x_maintenance branch of this module.

⚠️ Last version of yo (Yeoman) is needed to make it work correctly!

To install this module and Yeoman (yo):

To update this module:

To install this module and Yeoman (yo):

To update this module:

This describes how to use basically this module with a JHipster generated project.

If you want to use local versions of JHipster and the Kafka module:

Important : The following steps and use cases are to be done on a single generated JHipster monolithic application.

📅 In a near future it will be achievable between two or more monolithic applications or in microservices.

The different use cases are listed on another page.

Do your own configuration step-by-step!

The END represents the end of the prompts below, when files are written after confirmation (you can use the --force option with yo jhipster-kafka to overwrite all files).

You can use yo jhipster-kafka --skip-prompts to use the default prompts values to generate:

You can use your producer (*Producer.java) in other layers like resources or services by instancing it and using its send method (which is asynchronous).

By default a *KafkaResource.java is also generated with the producer. It has an endpoint to call the generated producer. Supposing you have generated consumers and producers for an existing Foo JHIpster entity (with a String field foo) and for no entity (Bar prefix), you can test it that way with curl and jq:

Generated consumers should not be explicitly used in other classes as each of them is running in a thread listening to the incoming messages. However, messages sent through the generated producer will be read if an associated consumer has been generated as well. You just have to read the logs of ./mvnw locally.

🚀 AKHQ (previously known as KafkaHQ) can be used following those steps in the root directory:

If you want to contribute to the module, please read the CONTRIBUTING.md.

In addition, here are some things to know before to dive into:

Apache-2.0 © François Delbrayelle (main contributor and stream leader) and all contributors, thank you!

We found indications that generator-jhipster-kafka is an Inactive project. See the full package health analysis to learn more about the package maintenance status.

Is generator-jhipster-kafka safe to use?

While scanning the latest version of generator-jhipster-kafka, we found that a security review is needed. A total of 8 vulnerabilities or license issues were detected. See the full security scan results.