Based on project statistics from the GitHub repository for the npm package generator-ionicjs, we found that it has been starred 1,750 times, and that 0 other projects in the ecosystem are dependent on it.

With more than 10 contributors for the generator-ionicjs repository, this is possibly a sign for a growing and inviting community.

We found a way for you to contribute to the project! Looks like generator-ionicjs is missing a Code of Conduct.

Further analysis of the maintenance status of generator-ionicjs based on released npm versions cadence, the repository activity, and other data points determined that its maintenance is Inactive.

An important project maintenance signal to consider for generator-ionicjs is that it hasn't seen any new versions released to npm in the past 12 months, and could be considered as a discontinued project, or that which receives low attention from its maintainers.

generator-ionicjs has more than a single and default latest tag published for the npm package. This means, there may be other tags available for this package, such as next to indicate future releases, or stable to indicate stable releases. 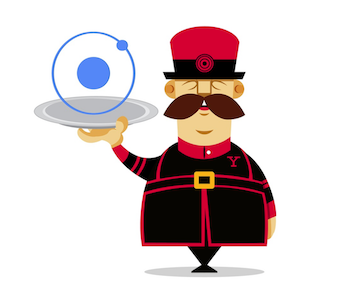 Make a new directory, and cd into it

Follow the prompts to select from some common plugins and pick a starter template, then spin up a connect server with watch and livereload for developing in your browser

Make sure you've commited (or backed up) your local changes and install the latest version of the generator via npm install -g generator-ionicjs, then go ahead and re-run yo ionicjs inside your project's directory.

The handsome devil is smart enough to figure out what files he is attempting to overwrite and prompts you to choose how you would like to proceed. Select Y for overwriting your Gruntfile.js and bower.json to stay up-to-date with the latest workflow goodies and front-end packages.

This way, when the Grunt bower-install task is run it will automatically inject your front-end dependencies inside the bower:js block of your app/index.html file.

If a library you wish to include is not registered with Bower or you wish to manually manage third party libraries, simply include any CSS and JavaScript files you need inside your app/index.html usemin build:js or build:css blocks but outside the bower:js or bower:css blocks (since the Grunt task overwrites the Bower blocks' contents).

Running grunt serve enhances your workflow by allowing you to rapidly build Ionic apps without having to constantly re-run your platform simulator. Since we spin up a connect server with watch and livereload tasks, you can freely edit your CSS (or SCSS/SASS files if you chose to use Compass), HTML, and JavaScript files and changes will be quickly reflected in your browser.

Once you're ready to test your application in a simulator or device, run grunt cordova to copy all of your app/ assets into www/ and build updated platform/ files so they are ready to be emulated / run by Cordova.

To compress and optimize your application, run grunt build. It will concatenate, obfuscate, and minify your JavaScript, HTML, and CSS files and copy over the resulting assets into the www/ directory so the compressed version can be used with Cordova.

To make our lives a bit simpler, the cordova library has been packaged as a part of this generator and delegated via Grunt tasks. To invoke Cordova, simply run the command you would normally have, but replace cordova with grunt and spaces with : (the way Grunt chains task arguments).

For example, lets say you want to add iOS as a platform target for your Ionic app

and emulate a platform target

To help you hit the ground running, let's walk through an example workflow together. We're assuming you've followed the usage directions and are inside your app's directory.

We'll start by running our app in a browser so we can make a few changes.

Play around with livereload by changing some of the styles in app/styles/main.css or HTML in one of the files in app/templates/. When you're ready, lets go ahead and build the assets for Cordova to consume and also spot check that we didn't bork any code during the build process. We can do that with another handy Grunt task that runs the build process and then launches a connect server for use to preview the app with our built assets.

If everything looks good the next step is to add a platform target and then emulate our app. In order for us to launch the iOS simulator from the command line, we'll have to install the ios-sim package. (If you forget to do this, Cordova will kindly remind you).

You may have realized that when the Grunt build process is run, it triggers the Cordova build system as well, so you end up with a beautifully packaged mobile app in a single command.

The foundation of our testing solution is built using Karma which was created by the AngularJS team and is all around awesome. Inside of your generated karma.conf.js file you will find some basic configuration settings. Notice that we're using Mocha to structure our tests and pulling in Chai, a slick assertion library. You can easily drop Chai and replace Mocha with Jasmine depending on your preference.

Your generated Gruntfile.js also contains a karma task that provides further configuration. Any properties specified via this task will override the values inside karma.conf.js when run via grunt. If you look closely at this task, you'll notice that we're using PhantomJS for both Karma targets, but you can easily update the karma:unit target to run tests inside of real browsers.

Ok, now that you have some context (and links to read up on the bundled testing libraries), go ahead and run grunt test and open up one of the included unit tests - test/spec/controllers.js. In your editor of choice, change this line - scope.pets.should.have.length(4); to any number other than four and watch what happens. Since your test files are being watched for changes, Grunt knows to go ahead and re-run your test suite, which in this cause should have errored out with a failure message being displayed in your terminal.

Undo your modification and ensure that all tests are passing before continuing on.

Note Depending on which starter template you picked, your tests may start off failing.

So you've finished writing your tests, why not showoff just how watertight your application has become? Using Istanbul - which was built at Yahoo - we can generate visually engaging code coverage reports that do just that!

Our beloved generator has done all the hard work for you, so go ahead and see these coverage reports in action by running grunt coverage.

If this is your first time using Istanbul, take a look around. It will help you spot gaps in your unit tests and lets face it, the more visual gratification we can get during our testing stage, the greater the likelihood of us sitting down and writing these tests to begin with!

If you made it this far then congratulations! You're now up and running with the gorgeous Ionic Framework powered by an intelligent workflow and sophisticated build system - all facilitated by the addition of just a few commands!

Be Advised: Ripple is under active development so expect support for some plugins to be missing or broken.

Add a platform target then run grunt ripple to launch the emulator in your browser.

Now go edit a file and then refresh your browser to see your changes. (Currently experimenting with livereload for Ripple)

Note: If you get errors beginning with Error: static() root path required, don't fret. Ripple defaults the UI to Android so just switch to an iOS device and you'll be good to go. 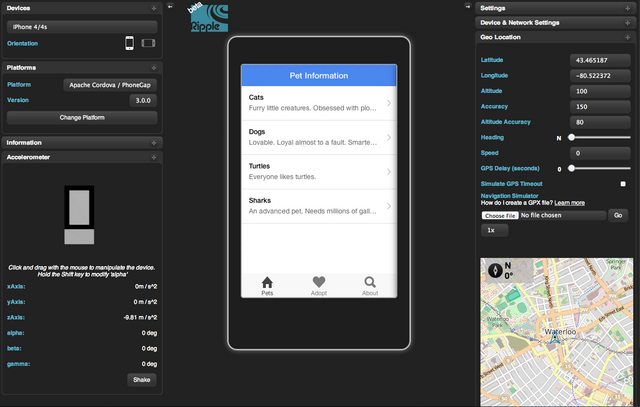 When submitting a PR, make sure that the commit messages match the AngularJS conventions.

We found indications that generator-ionicjs is an Inactive project. See the full package health analysis to learn more about the package maintenance status.

Is generator-ionicjs safe to use?

While scanning the latest version of generator-ionicjs, we found that a security review is needed. A total of 54 vulnerabilities or license issues were detected. See the full security scan results.