Based on project statistics from the GitHub repository for the npm package formdata-polyfill, we found that it has been starred 335 times, and that 85 other projects in the ecosystem are dependent on it.

With more than 10 contributors for the formdata-polyfill repository, this is possibly a sign for a growing and inviting community.

We found a way for you to contribute to the project! Looks like formdata-polyfill is missing a Code of Conduct.

Further analysis of the maintenance status of formdata-polyfill based on released npm versions cadence, the repository activity, and other data points determined that its maintenance is Sustainable.

An important project maintenance signal to consider for formdata-polyfill is that it hasn't seen any new versions released to npm in the past 12 months, and could be considered as a discontinued project, or that which receives low attention from its maintainers.

formdata-polyfill has more than a single and default latest tag published for the npm package. This means, there may be other tags available for this package, such as next to indicate future releases, or stable to indicate stable releases.

A FormData polyfill for the browser ...and a module for NodeJS (New!)

The browser polyfill will likely have done its part already, and i hope you stop supporting old browsers c",)
But NodeJS still laks a proper FormData
The good old form-data package is a very old and isn't spec compatible and dose some abnormal stuff to construct and read FormData instances that other http libraries are not happy about when it comes to follow the spec.

It also comes with way to convert FormData into Blobs - it's not something that every developer should have to deal with. It's mainly for node-fetch and other http library to ease the process of serializing a FormData into a blob and just wish to deal with Blobs instead (Both Deno and Undici adapted a version of this formDataToBlob to the core and passes all WPT tests run by the browser itself)

PS: blob & file that are appended to the FormData will not be read until any of the serialized blob read-methods gets called ...so uploading very large files is no biggie

The browser polyfill conditionally replaces the native implementation rather than fixing the missing functions, since otherwise there is no way to get or delete existing values in the FormData object. Therefore this also patches XMLHttpRequest.prototype.send and fetch to send the FormData as a blob, and navigator.sendBeacon to send native FormData.

I was unable to patch the Response/Request constructor so if you are constructing them with FormData then you need to call fd._blob() manually.

If you need to support IE <= 9 then I recommend you to include eligrey's blob.js (which i hope you don't - since IE is now dead)

Based on this you can decide for yourself if you need this polyfill. 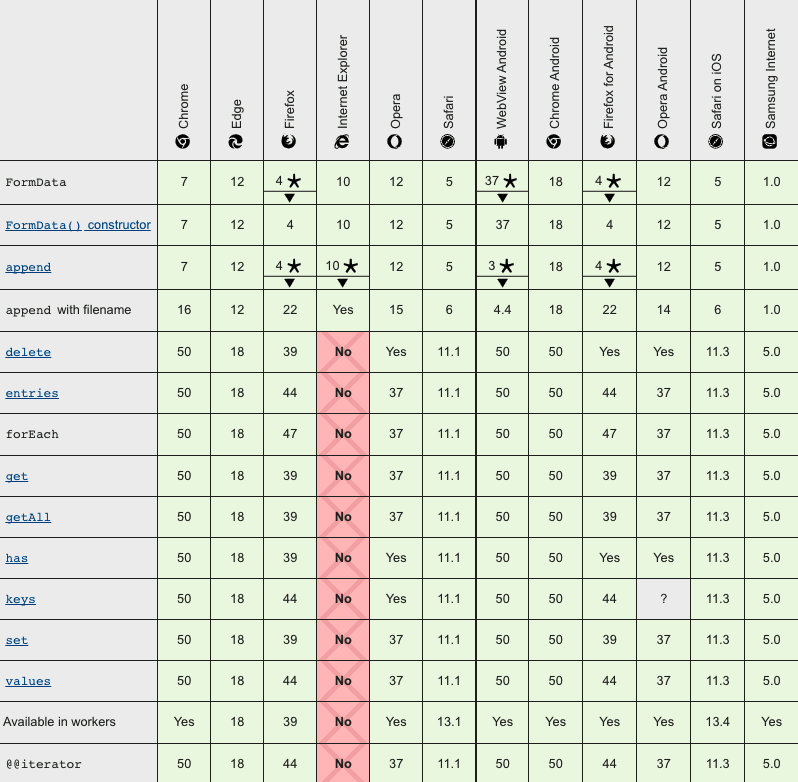 This normalizes support for the FormData API:

We found indications that formdata-polyfill maintenance is sustainable demonstrating some project activity. We saw a total of 20 open source contributors collaborating on the project. See the full package health analysis to learn more about the package maintenance status.

Is formdata-polyfill safe to use?

The npm package formdata-polyfill was scanned for known vulnerabilities and missing license, and no issues were found. Thus the package was deemed as safe to use. See the full health analysis review.