The npm package es-reduxed receives a total of 5 downloads a week. As such, we scored es-reduxed popularity level to be Limited.

Based on project statistics from the GitHub repository for the npm package es-reduxed, we found that it has been starred 3 times, and that 0 other projects in the ecosystem are dependent on it.

Further analysis of the maintenance status of es-reduxed based on released npm versions cadence, the repository activity, and other data points determined that its maintenance is Inactive.

es-reduxed has more than a single and default latest tag published for the npm package. This means, there may be other tags available for this package, such as next to indicate future releases, or stable to indicate stable releases.

ES Reduxed offers an easy way to build an event-sourced backend using the redux pattern javascript developers are familiar with.

Comes with a Postgres backed event store, with more event store providers coming, or implement them yourself.

Run npm i es-reduxed to save to your dependencies.

If you're using the Postgres event store provider, you need to run the migration provided in db/000__event_store.sql.

Whichever schema you run the migration against is the one you must supply when setting up the event store provider:

Instantiating a provider without schema defaults to the public schema.

To get started we:

In the following example we use the postgres provider included in this package:

Redux state is now coupled to the event store. Whenever you save an event, your redux state will update once it has received the event from the subscriber.

For this to work, your redux store needs a little extra functionality. The eventStoreReduxEnhancer provides this functionality as a redux enhancement. You provide this to the createStore function when creating your store as follows:

If you use multiple store enhancers, such as the applyMiddleware function provided by redux, you compose these enhancers as follows:

In the previous example you will notice that our actions extend EventBase instead of Action. This is because the events we use in event sourcing have a particular structure and require particular properties to be present in addition to the type property required by actions. When you raise an event, most of this is taken care of for you by the provider. However your events will form a discriminated union of well typed event payloads based on the type property which acts as a discriminator.

This is typically how most people use redux anyway. Here's an example:

Our bank events will now have well typed payloads and produce a compile-time error if I attempt to access payload.value on an AccountClosedEvent.

Setting up Redux-Devtools for serverside debugging

You can then connect to it using the normal redux devtools extension as a remote instance: 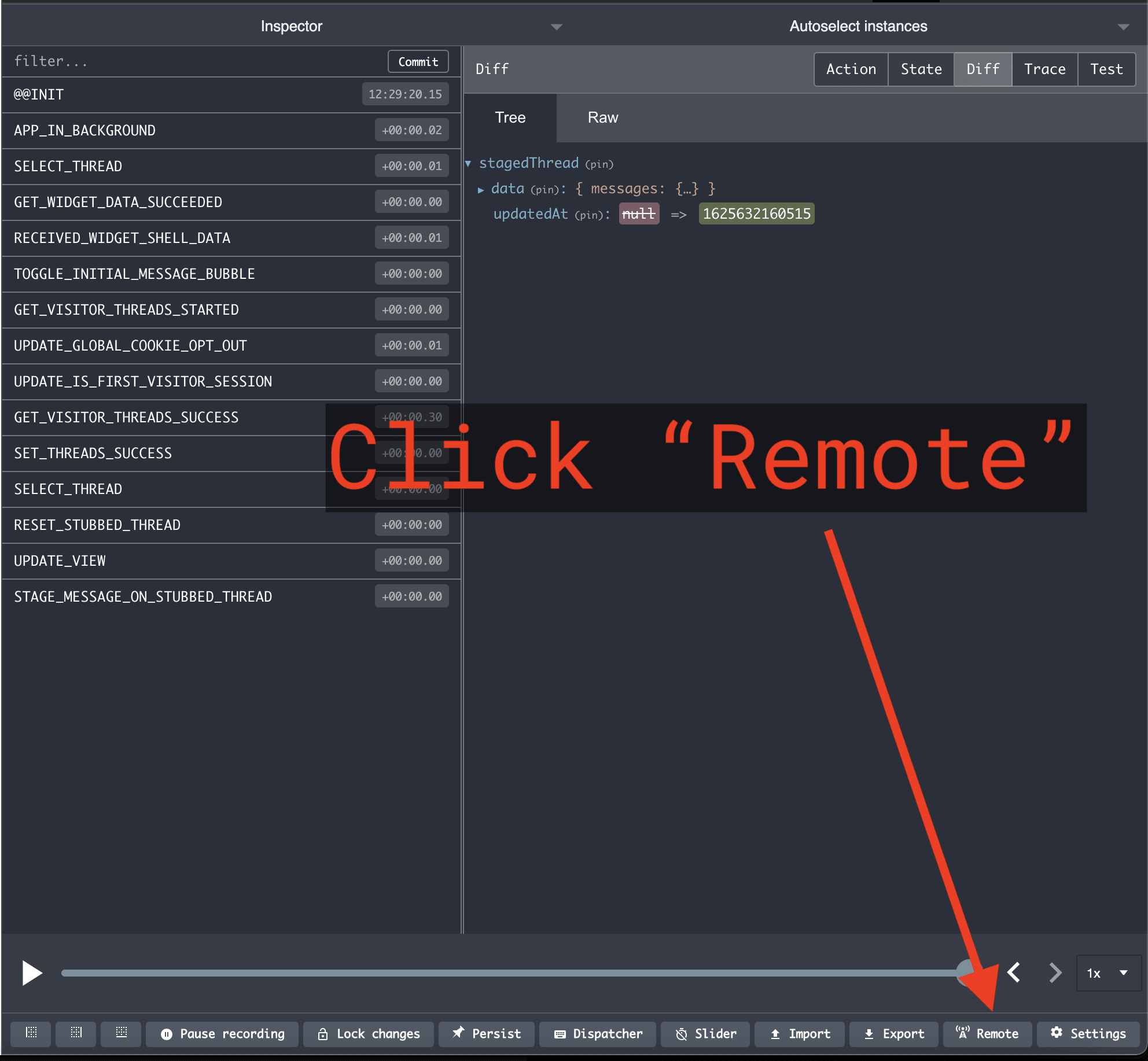 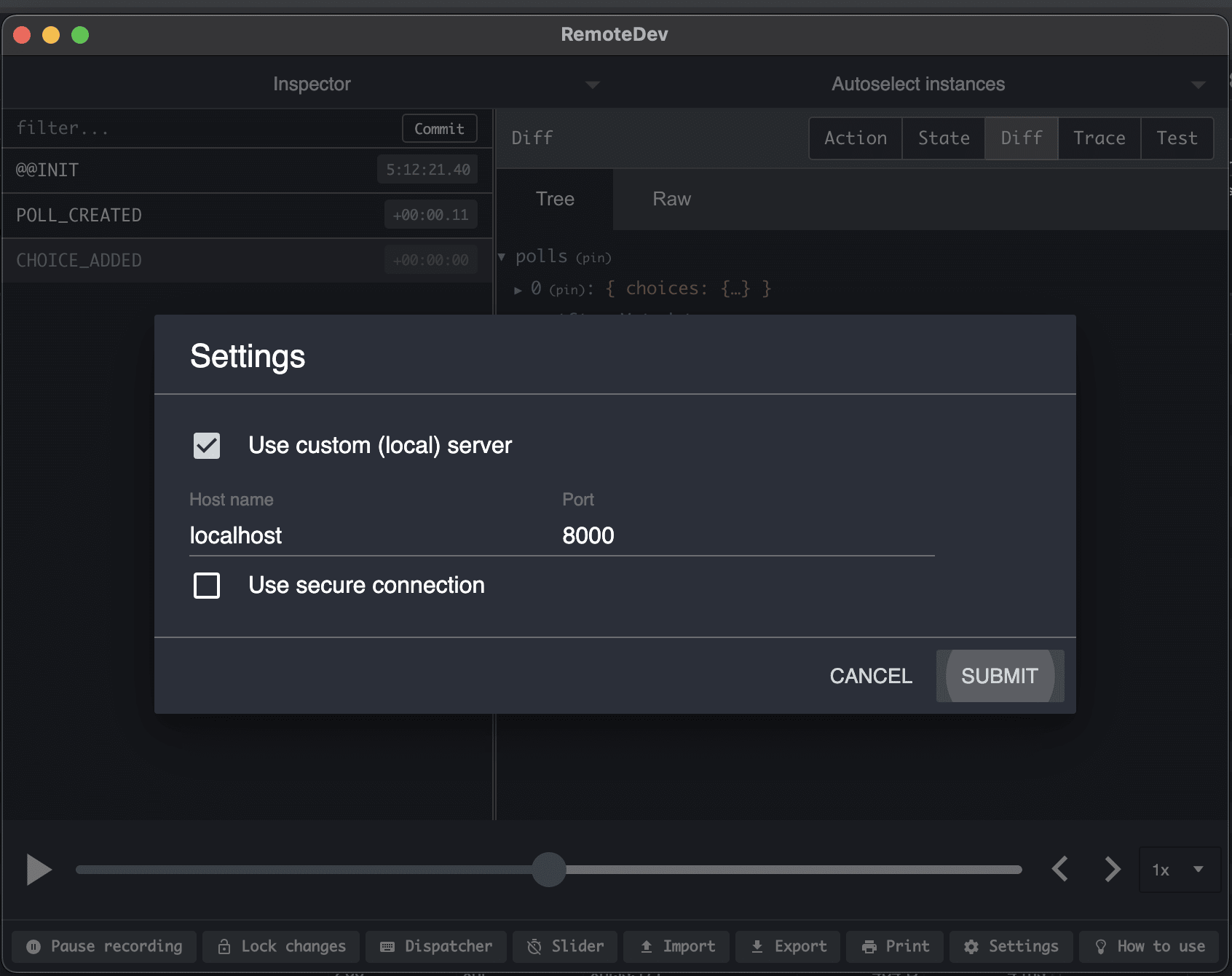 A word on Events vs Actions

Events and actions are very similar, and the difference is mostly a matter of semantics, but in programming, semantics matter. Running a reducer over events or actions still produces the current state, however there are key differences:

For that reason, es-reduxed recommends always using events written in the past tense for your event sourcing solution.

The npm package es-reduxed receives a total of 5 weekly downloads. As such, es-reduxed popularity was classified as limited. Visit the popularity section on Snyk Advisor to see the full health analysis.

We found indications that es-reduxed is an Inactive project. See the full package health analysis to learn more about the package maintenance status.

Is es-reduxed safe to use?

The npm package es-reduxed was scanned for known vulnerabilities and missing license, and no issues were found. Thus the package was deemed as safe to use. See the full health analysis review.