The npm package ember-e3 receives a total of 3 downloads a week. As such, we scored ember-e3 popularity level to be Limited.

Based on project statistics from the GitHub repository for the npm package ember-e3, we found that it has been starred 48 times.

We found a way for you to contribute to the project! Looks like ember-e3 is missing a Code of Conduct.

Further analysis of the maintenance status of ember-e3 based on released npm versions cadence, the repository activity, and other data points determined that its maintenance is Inactive.

An important project maintenance signal to consider for ember-e3 is that it hasn't seen any new versions released to npm in the past 12 months, and could be considered as a discontinued project, or that which receives low attention from its maintainers.

ember-e3 has more than a single and default latest tag published for the npm package. This means, there may be other tags available for this package, such as next to indicate future releases, or stable to indicate stable releases.

It borrows heavily from D3 for the math-behind-the-magic, but adheres to the more modern "data down / actions up" paradigm for data binding. E3 also supports rendering both to Canvas and SVG.

Please note that this is in a very early beta (alpha?) stage and that the API should not be considered stable...or always functioning. We're not quite feature complete and the first few iterations will try to address that. (See TODO.md for status). I would not yet consider this production ready.

Should be as easy as pie:

Live examples are available for your perusal. If you want to view the examples locally, clone this repository, ember server and visit localhost:4200 (example app is in /tests/dummy/app/). 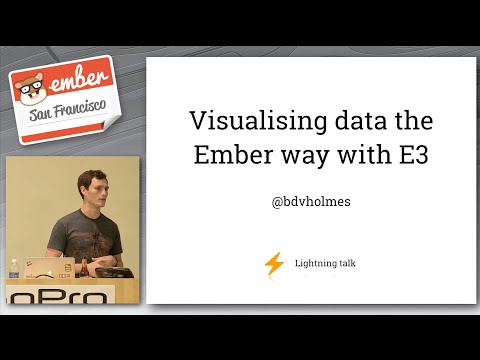 There's a few things going on here. Let's break it down.

The first step to creating a visualization is to create the context onto which we will render each individual part. We'll use the e3-container component to create one.

This component takes a number of parameters:

Scales are created with the scale component which takes two inline arguments: the context that this scale is being registered to, and the name that it will be published as.

Because the name dictates how to later use that scale, the following is a valid way to change how you're viewing the data:

By toggling the isZoomedOut property, the Y Scale that is used to render the objects on the visualization is swapped out and the elements will animate to their new positions.

At the moment, only linear scales are supported but more scales (including ordinal) will arrive shortly.

A linear scale takes both a domain and a range property, which are both arrays with two numbers. Because the domain is usually based on the underlying model, a helper (e3-extent) is provided that finds the extent of the values with a given key. This helper also takes a few options:

Currently, we support a limited number of shapes out of the box: Circles, Lines, Paths (for line graphs), Rectangles, and Text.

There's some important things underneath these shapes that dictate how they render and animate. For example, suppose I wanted to create a new circle-type component and override the behavior.

Then, instantiating this component is similar to the above. Note: I've directly applied values to the x/y/r attributes, but you could bind a function to these, or use the e3-bind-scale helper to bind a scale to these properties.

E3 also has a notion of grouping shapes together and applying transformations to that group. Think of a group has a hybrid of a container and a shape.

This would render a circle and a rectangle with the same x position:

Because a group has its own context and meta object, you could create sub scales within a group context.

The npm package ember-e3 receives a total of 3 weekly downloads. As such, ember-e3 popularity was classified as limited. Visit the popularity section on Snyk Advisor to see the full health analysis.

We found indications that ember-e3 is an Inactive project. See the full package health analysis to learn more about the package maintenance status.

Is ember-e3 safe to use?

While scanning the latest version of ember-e3, we found that a security review is needed. A total of 13 vulnerabilities or license issues were detected. See the full security scan results.