The npm package dripip receives a total of 474 downloads a week. As such, we scored dripip popularity level to be Limited.

Based on project statistics from the GitHub repository for the npm package dripip, we found that it has been starred ? times, and that 0 other projects in the ecosystem are dependent on it.

Further analysis of the maintenance status of dripip based on released npm versions cadence, the repository activity, and other data points determined that its maintenance is Inactive.

An important project maintenance signal to consider for dripip is that it hasn't seen any new versions released to npm in the past 12 months, and could be considered as a discontinued project, or that which receives low attention from its maintainers.

dripip has more than a single and default latest tag published for the npm package. This means, there may be other tags available for this package, such as next to indicate future releases, or stable to indicate stable releases. 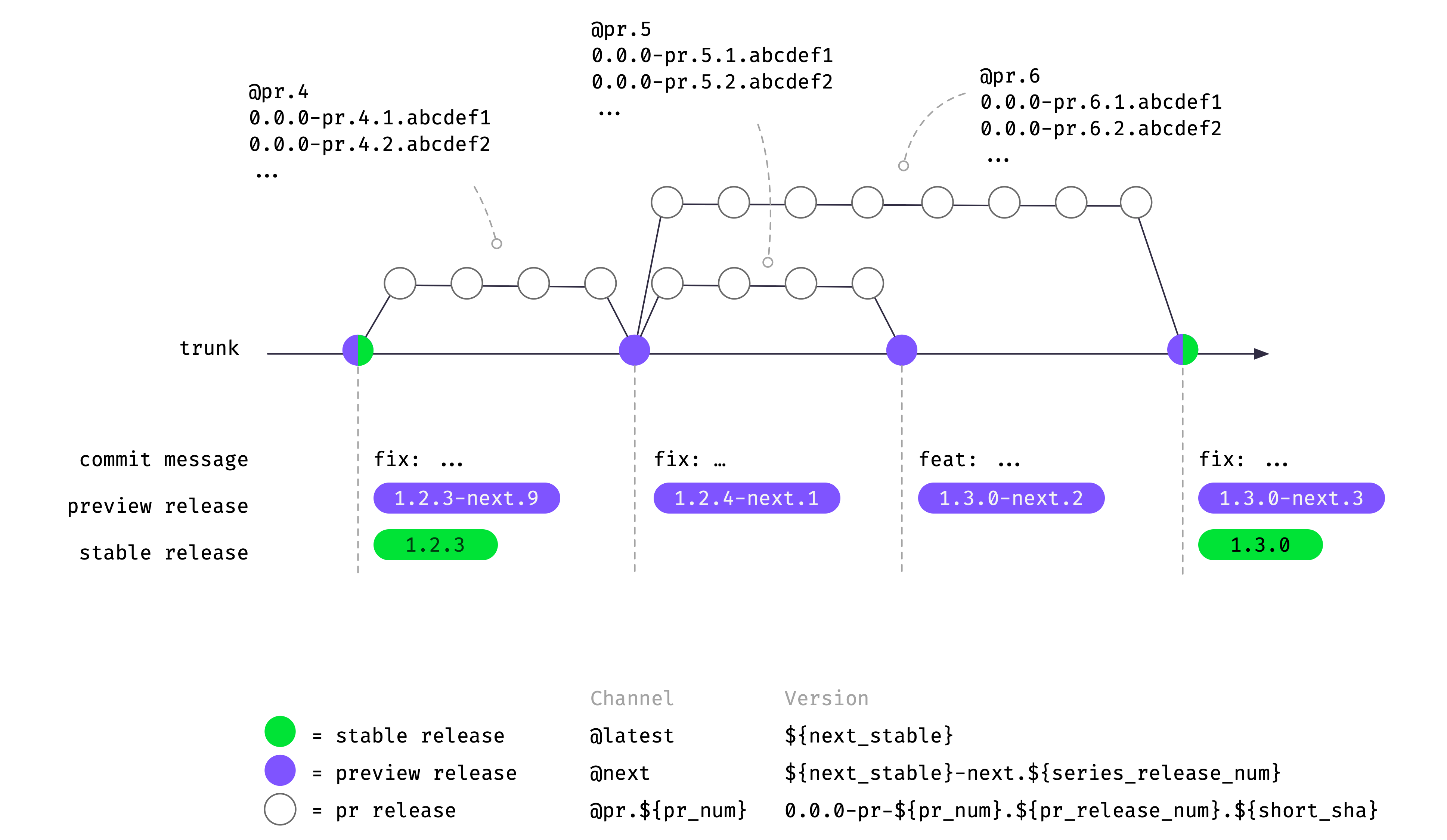 Dripip is a command line interface (CLI) for continuously releasing npm packages. It has support for three kinds of releases: pull-request releases, canary releases, stable releases. It builds on top of Git, Semver, Conventional Commit, and GitHub. Support for alternative version control systems (e.g. Darcs) and platforms (e.g. GitLab) are not currently supported but they probably could be. The concepts of dripip are relatively general.

Continuous delivery means that every single meaningful commit to your library will be released. The benefit of this approach is that when you ship value your users get access to it immediately, and as an author you don't need to manage incoming queries like "when will this be released?". You get to to auto-reply: "It already it! 😃".

Pull-request releases occur on, surprise, pull-requests. You can have CI run them or do them ad-hoc from your machine, either workflow is fine (but choose one, as mixing will naturally lead to already-published errors). These kinds of releases are useful when link workflows are not good enough. For example your feature is a CLI that you want to make sure plays well with npx. Unlike other release types pull-request releases do not result in git tags. Instead, Dripip uses the npm registry to maintain its release state. The version pattern of a pull-request release is:

The 0.0.0 version is used because there is no meaningful semantic version to put here. It cannot be the version you're branching from since this version syntax would indicate it is a pre-release for that version, which it isn't, it's the opposite, a release after it; It cannot be the version you're going towards because it cannot be generally known if a PR will result in a patch minor or major semver change; Even if Dripip tried to apply conventional commit analysis to the PR commits it wouldn't account for concurrent PRs and the generally async nature that PRs live in with regard to one another. So ultimately 0.0.0 is the most sensible general choice.

The pr_num part is the pull-request number. The same one that you see on the GitHub UI, URL etc. of a pull-request.

The pr_release_num is a monotonically increasing 1-based (starts from 1, not 0) integer. It serves a few purposes. It provides orientation for humans at a glance, like how many releases has a PR had or where does a given release fall within the PR release set. Its functional purpose is to support correct lexical sorting. Without this little number it would be impossible to sort PR releases without some kind of additional metadata e.g. publish time. Thanks to this, when you run e.g. npm versions, you get an accurate ordering.

The short_sha is what you see next to commits in much of the GitHub UI, including PR pages. Its primary purpose is to make it easy for you to tie a release back to something in your Git history. For example when looking at a PR page you can copy-paste the sha into search to find the exact commit for that release. Whatever the particular, this is just a convenient piece of information for you. Ultimately we developers practice many a crude workflow, habits (console.log vs debugger anyone?).

When Dripip makes a pr release, it includes an upsert of a dist-tag of pattern pr.${pr_num}. This makes it very easy to install the latest published version for a given pull-request.

Canary releases occur on trunk branches. These releases should be automated by your CI. They give your users access to what your stable version will become. The version pattern of a canary release is:

The next_stable is whatever your upcoming stable version will be. The series_release_num is a monotonically increasing 1-based (starts from 1, not 0) integer. The first canary release after a stable release starts at 1, increasing by 1 at each canary release, until a stable is cut at which point the numbering is reset upon the next canary release.

When Dripip makes a canary release, it includes an upsert of a dist-tag called next. This makes it very easy to install the bleeding edge of your package. Additionally, a git tag called next is also maintained. Whatever commit the next tag is on is the same instance of your package that would be installed if a user did npm install <your package>@next.

Stable releases occur on trunk branches. The version pattern of a stable release is just a regular version, whatever the next stable is:

These releases should be managed however your team works, of course, but here are some general tips:

When Dripip makes a canary release, it includes an upsert of a dist-tag called latest. This is actually what npm already does by default. Dripip does not deviate here.

Typically when an npm package is released its package.json version field will be updated and committed into version control. This is a bad match for continuous delivery however, because it means that, more or less, half of the git history will become meta commits. To solve this, dripip takes a novel approach of keeping the version out of version control. It uses Git tags to store that state, and when publishing your package, will set the package.json version field right before publishing, and then unset it right after publishing completes. You notice nothing, your users notice nothing, and your git history looks ideal. This is unorthodox, but it works well.

Having a valid semver value in the version field is required by npm. Dripip puts the following value into your project's package.json to satisfy that constraint. This is what you should check into version control.

Because the canary release notes have a stable tag, it means you and your uses can always check out what's coming in the next stable version by visiting:

For example checkout what's coming up in dripip right now by visiting https://github.com/prisma-labs/dripip/releases/tag/next.

We are interested in building a dripip GitHub Action. Until it ships, here are the things you need to do.

The npm package dripip receives a total of 474 weekly downloads. As such, dripip popularity was classified as limited. Visit the popularity section on Snyk Advisor to see the full health analysis.

Is dripip safe to use?

While scanning the latest version of dripip, we found that a security review is needed. A total of 3 vulnerabilities or license issues were detected. See the full security scan results.