Based on project statistics from the GitHub repository for the npm package dependency-cruiser, we found that it has been starred 3,356 times, and that 195 other projects in the ecosystem are dependent on it.

With more than 10 contributors for the dependency-cruiser repository, this is possibly a sign for a growing and inviting community.

Further analysis of the maintenance status of dependency-cruiser based on released npm versions cadence, the repository activity, and other data points determined that its maintenance is Healthy.

dependency-cruiser has more than a single and default latest tag published for the npm package. This means, there may be other tags available for this package, such as next to indicate future releases, or stable to indicate stable releases.

Not sure how to use dependency-cruiser?

To help you get started, we've collected the most common ways that dependency-cruiser is being used within popular public projects.

View more ways to use dependency-cruiser 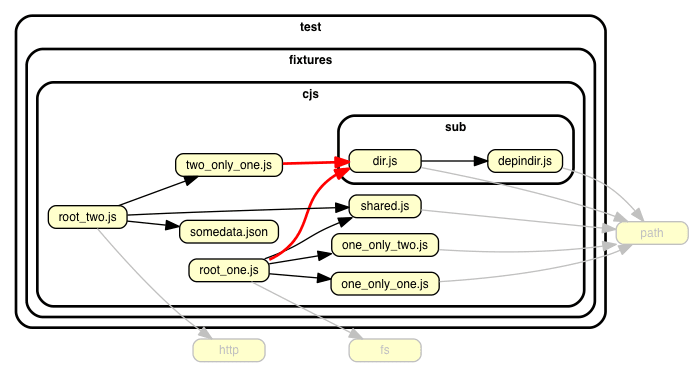 This runs through the dependencies in any JavaScript, TypeScript, LiveScript or CoffeeScript project and ...

As a side effect it can generate dependency graphs in various output formats including cool visualizations you can stick on the wall to impress your grandma.

This will look around in your environment a bit, ask you some questions and create a .dependency-cruiser.js configuration file attuned to your project[^1].

[^1]: We're using npx in the example scripts for convenience. When you use the commands in a script in package.json it's not necessary to prefix them with npx.

Show stuff to your grandma

To create a graph of the dependencies in your src folder, you'd run dependency cruiser with output type dot and run GraphViz dot[^2] on the result. In a one liner:

[^2]: This assumes the GraphViz dot command is available - on most linux and comparable systems this will be. In case it's not, see GraphViz' download page for instructions on how to get it on your machine.

When you ran the depcruise --init command above, the command also added some rules to .dependency-cruiser.js that make sense in most projects, like detecting circular dependencies, dependencies missing in package.json, orphans, and production code relying on dev- or optionalDependencies.

Start adding your own rules by tweaking that file.

This will validate against your rules and shows any violations in an eslint-like format:

There's more ways to report validations; in a graph (like the one on top of this readme) or in an self-containing html file.

I want to know more!

You've come to the right place 😃 :

Made with 🤘 in Holland.

We found that dependency-cruiser demonstrated a healthy version release cadence and project activity. It has a community of 40 open source contributors collaborating on the project. See the full package health analysis to learn more about the package maintenance status.

Is dependency-cruiser safe to use?

The npm package dependency-cruiser was scanned for known vulnerabilities and missing license, and no issues were found. Thus the package was deemed as safe to use. See the full health analysis review.