The npm package context receives a total of 5,384 downloads a week. As such, we scored context popularity level to be Small.

Based on project statistics from the GitHub repository for the npm package context, we found that it has been starred 1,837 times, and that 6 other projects in the ecosystem are dependent on it.

With more than 10 contributors for the context repository, this is possibly a sign for a growing and inviting community.

Further analysis of the maintenance status of context based on released npm versions cadence, the repository activity, and other data points determined that its maintenance is Healthy.

context has more than a single and default latest tag published for the npm package. This means, there may be other tags available for this package, such as next to indicate future releases, or stable to indicate stable releases.

Simple utility for context propagation within Javascript applications and libraries. Loosely based on the ideas behind React's context, allows you to achieve the same goals (and more) without actually using react. It allows you to keep reference for shared variables, and access them down in your function call even if not declared in the same scope. 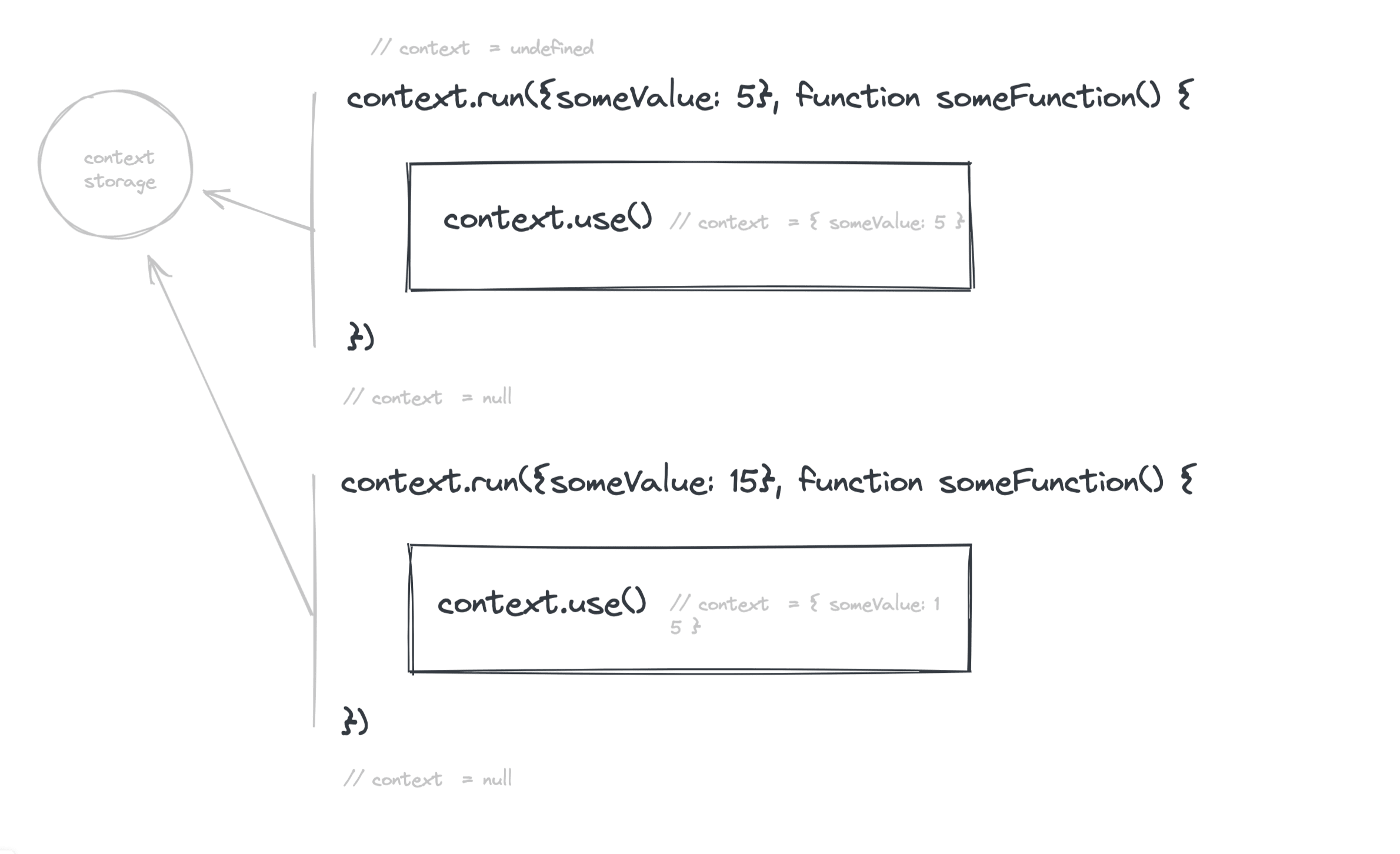 The reason the context is cleared after its run is so that items can't override one another. Assume you have two running the same async function twice, and it writes to the context, expecting to read the value somewhere down the line. Now you have two competing consumers of this single resource, and one eventually get the wrong value since they both read from and write to the same place.

Context tries to mimic the behavior of Javascript scopes without actually being in the same scopes, and the API is built around context initialization, setting of values within the context and retrieving values.

Context's default export, it creates a context singleton object that can later be referenced.

createContext also accepts an initialization function that's run every time ctx.run is called. It allows intercepting the context initialization and adding custom logic, or default values. The init function is passed the context object run was called with, and the parent context if it was called within a previously created context. The init function needs to return the desired context object.

If run is called within a different run call, the context values will be merged when the callback is run. When we exit our callback, the context will be reset to the values it had before the call.

These are the main ways to access the context within your code. They return the current object that stored within the context, and differ in the way they handle calls outside of the context.

Bind a function to a context. It takes an object referencing the data you want to store within your context, and a callback function to run. It returns a function that can be called with the same arguments as the original function. The function will then internally call run with the same arguments, and return the result of the callback function, so it is useful if you want to reference a context after it was closed, for example - when running an async function.

Working with context inside within async code may lead to unexpected results when we don't fully consider what's happening. Trying to call your context from the async part of your code will probably return null instead of your values.

This is known and expected behavior. Context is a synchronous context propagation tool that completely relies on the synchronous nature of function calls in JS - this is exactly what allows context to run.

But my function is still running. Why did the context clear?

The async parts of your function are actually not executed along with your sync code, and even though you "await" it, the browser carries on and allows other code to run in between instead of blocking execution until your async code is complete.

There are multiple strategies of handling async functions with context.

Simple utility for context propagation within Javascript applications and libraries. Loosely based on the ideas behind ... Visit Snyk Advisor to see a full health score report for context, including popularity, security, maintenance & community analysis.

The npm package context receives a total of 5,384 weekly downloads. As such, context popularity was classified as small. Visit the popularity section on Snyk Advisor to see the full health analysis.

We found that context demonstrated a healthy version release cadence and project activity. It has a community of 30 open source contributors collaborating on the project. See the full package health analysis to learn more about the package maintenance status.

Is context safe to use?

The npm package context was scanned for known vulnerabilities and missing license, and no issues were found. Thus the package was deemed as safe to use. See the full health analysis review.