The npm package chui receives a total of 2 downloads a week. As such, we scored chui popularity level to be Limited.

Based on project statistics from the GitHub repository for the npm package chui, we found that it has been starred ? times, and that 0 other projects in the ecosystem are dependent on it.

We found a way for you to contribute to the project! Looks like chui is missing a Code of Conduct.

Further analysis of the maintenance status of chui based on released npm versions cadence, the repository activity, and other data points determined that its maintenance is Inactive.

An important project maintenance signal to consider for chui is that it hasn't seen any new versions released to npm in the past 12 months, and could be considered as a discontinued project, or that which receives low attention from its maintainers.

chui has more than a single and default latest tag published for the npm package. This means, there may be other tags available for this package, such as next to indicate future releases, or stable to indicate stable releases. 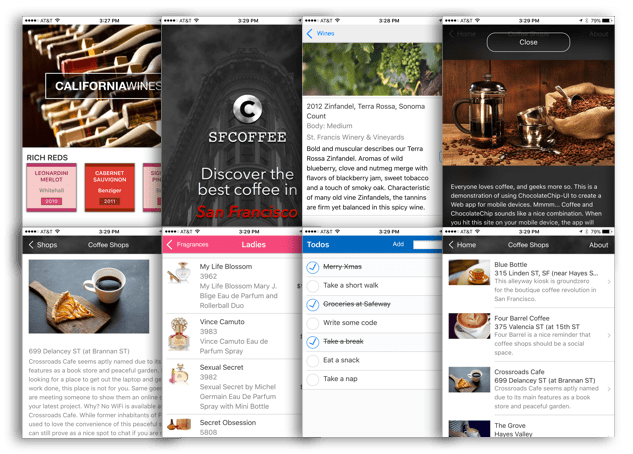 For iOS, ChocolateChip-UI supports versions 9 and 10 using Swift 3 and WkWebView for fast JavaScript rendering. For Android it supports Jelly Bean up to Nougat (4.2 - 7.0).

Just run (depending on your setup, you may need to run it with sudo):

chui is dependent on chocolatechipui for its resources. Since we update chocolatechipui frequently, it's a good idea to run npm update at least once a week. This will pull down the latest version for chui to use.

You can test this after running npm i in this directory. The tests use Mocha and Chai. Because this tool create folders and files on the user's desktop, we do not physically test for those results. Instead we use mocks of internal functions to test the logic used to determine who files should be created. To run the tests:

Chui helps you quickly create a ChocolateChip-UI project. There are two types of projects:

When you create a project, chui add Rollup and Babel to the build process. This lets you write your code with modern ES6 code patterns and transpile it to work on older Android phones.

To create a simple JavaScript project without the need to running a server, you have the following options:

Here are example's of using chui with these options:

You can provide a path for where you want to create your project. You do this with the -p flag. The path should be appropriate for the platform you are on. Paths for Linux and Mac will be different from paths for Windows:

After creating a project, you'll need to build it before launching it in a browser. Chui provides everything to make this easy for you.

After creating a project, cd to the project folder and run:

When that finishes, just run:

This will run Rollup, which will bundle your files, then transpile the result with Babel. It will also launch watchers on you index.html file and the contents of your project's dev folder. Finally, it will launch your app in the default browser.

Running gulp will build and launch your project in your default browser. It will also watch your dev folder and reload the browser whenever you make and save chages to the code in that folder.

When you create a new project for ES6, you'll find all your development code in the project's dev folder. When you run gulp, it takes those files and compiles them into ES5 and puts them in the js folder, which your project loads.

After creating a project, you can go the the app.js file in your project's dev folder. This is the core of your app. In that file you can import whatever utilities and widgets you will need for you app:

You may also need to import widgets, components, and other resources into your project's other files. Make sure you have the paths correct for importation. You'll get an error message during build time about a file being ENOENT. This means the import couldn't find the file. Either it does not exist (possibly you forgot to create it or put it in another location), or the path you are using to import it is wrong.

Chui can also convert your completed app into a hybrid app for Android and iOS. It does this by create a simple webview shell that loads your web app. This allows your to open your Android project in Android Studio and your iOS porject in Xcode. You can then build and test these on the respective emulator/simulator or load them directly on tethered devices. When you're satisfied with the performance of your app, you can then submit it for review on Android Play or the Apple App Store.

To create a hybrid app, you use the -h flag. You can also use the -w followed by the path to your web app. After typing -w followed by a space, you can drag your project folder on to the terminal, and the path will be added automatically. Or you can leave -w out and copy your app in later. To do this for iOS, open the Xcode project and copy your app's files into the Website folder. For Android, copy your app's files into the Android Studio Project's assets folder at app/src/main/assets.

When you create a hybrid app for Android or iOS, chui includes default icons for your app. You'll of course want to replace those with ones for your app. Android and iOS put have different sized apps and store them in different places. Note down the dimensions of the icons provided in your hybrid project and replace them with your custom images with the same dimensions and names.

You can learn about how to build apps with ChocolateChip-UI at the website: chocolatechip-ui.github.io.

And for support for ChocolateChip-UI version 3.9.x, run:

Please be aware that this might pull in ChocolateChip-UI version 5.x as a dependency. If it did, you'll need to go to where your ChUI module is installed on your system (usr/local/lib/node_modules/chui on Linux and macOS, C:\Users\<your_user_name>\AppData\Roaming\npm\node_modules\chui on Windows). Open the chui folder and replace the chocolatechipui folder with version 4.9.10.

The npm package chui receives a total of 2 weekly downloads. As such, chui popularity was classified as limited. Visit the popularity section on Snyk Advisor to see the full health analysis.

We found indications that chui is an Inactive project. See the full package health analysis to learn more about the package maintenance status.

Is chui safe to use?

While scanning the latest version of chui, we found that a security review is needed. A total of 9 vulnerabilities or license issues were detected. See the full security scan results.