The npm package campaign receives a total of 100 downloads a week. As such, we scored campaign popularity level to be Limited.

Based on project statistics from the GitHub repository for the npm package campaign, we found that it has been starred 641 times, and that 2 other projects in the ecosystem are dependent on it.

We found a way for you to contribute to the project! Looks like campaign is missing a security policy.

Further analysis of the maintenance status of campaign based on released npm versions cadence, the repository activity, and other data points determined that its maintenance is Inactive.

An important project maintenance signal to consider for campaign is that it hasn't seen any new versions released to npm in the past 12 months, and could be considered as a discontinued project, or that which receives low attention from its maintainers.

We found a way for you to contribute to the project! Looks like campaign is missing a Code of Conduct.

campaign has more than a single and default latest tag published for the npm package. This means, there may be other tags available for this package, such as next to indicate future releases, or stable to indicate stable releases.

Compose responsive email templates easily, fill them with models, and send them out.

This is the stuff responsible for sending beautiful emails in Pony Foo. I've isolated that code, and turned it into a reusable package, called campaign. It comes with a dead simple API, and a beautiful responsive layout, originally written by MailChimp, adapted by me. It's also easily configurable, and comes with nice conventions over configuration, so you don't need to do a lot to get going.

Being highly configurable is important to campaign, and for that reason it ships with several plugins to popular view engines: campaign-mustache, campaign-jade, and campaign-jadum. You can use any of these to manage your email templates. Typically, you'll want to use the same templating engine you use in your front-end views, for consistency across your codebase.

Campaign can send emails through a variety of services using different plugins as well. You could also create your own email service provider plugin.

Here is a screenshot of an email sent using this library, as seen on Pony Foo subscriptions, in production. This email is using the default layout provided by campaign. 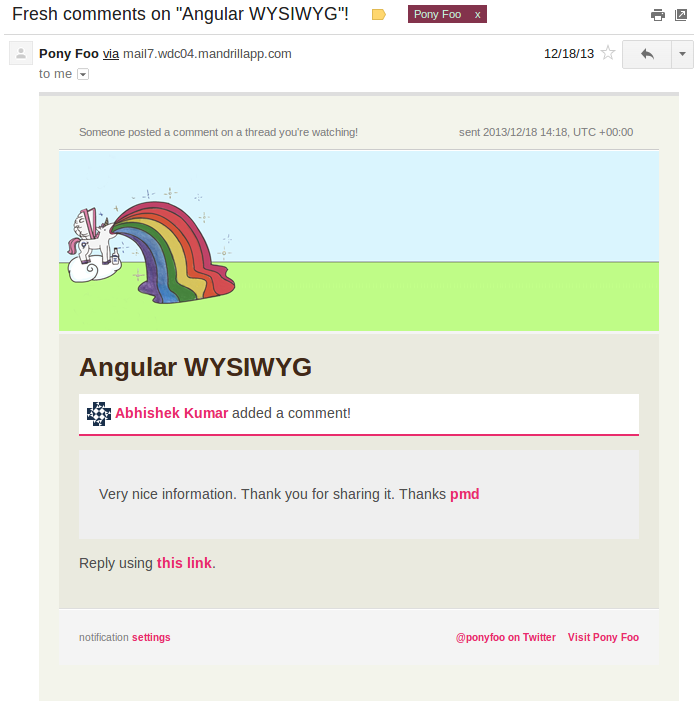 There's a few configurable options, here's an overview of the default values.

The from address for our emails. The provider is responsible for trying to make it look like that's the send address. Not necessarily used for authentication.

You can pick any supported email providers, creating your own or choosing one that comes with campaign. To implement a provider yourself, you'll need to create a custom provider object. The provider object should have a send function, which takes a model, and a done callback. You can read more about custom providers below.

The layout used in your emails. Templates for email sending are meant to have the bare minimum needed to fill out an email. Since you want a consistent UX, the same layout should be used for every email your product sends.

A default layout template is provided by supporting template engines. You can provide a different one, just set layout to the absolute path of a template file that's supported by your template engine. For information about the model passed to the layout, see the Templates section.

When you want to customize HTML before submission, but after your template engine and layout have been rendered into a single piece of HTML, you can use the formatting option. Useful for tweaking CSS or markup in a global manner for all emails without having to touch the models every time.

You may provide the full path to an image. This image will be encoded in base64 and embedded into the email as a heading. Embedding helps people view your emails offline.

If true, then emails won't be sent to any recipients at all. You could also set trap to nico@bevacqua.io, and all emails would be sent to me instead of the intended recipients. Great for spamming me, and also great for testing.

When you trap recipients, the email will get a nifty JSON at the end detailing the actual recipients that would've gotten it.

Once you've created a client, you can start sending emails. Here are the default options, and what you need to fill out. The from and trap fields are inherited from the configuration object passed to campaign, and they can be overridden on an email-by-email basis.

You can also use .render or .renderString as the equivalents to both of these methods that will only render the emails as HTML. This is useful for debugging and to render emails identically to what your customers see, but handle the rendering logic yourself.

This is the line that most email clients show as a teaser for the email message. It defaults to the subject line. Changing it is extremely encouraged.

If you want to provide the template with embedded images (other than the optional email header when creating the campaign client) you can set images to a list of file paths and names (to later reference them in your templates), as shown below.

Instead of a file you can provide a data value with the base64 encoded data, and avoid the overhead of creating a temporary file. If you choose this approach you must set the mime property as well.

Social metadata used when sending an email can help build your brand. You can provide a twitter handle, a name for your brand, and a landing page.

The name is used as the name of the send address, as well as in the "Visit

Many email providers allow you to add dynamic content to your templates. For instance, the feature is supported by both the campaign-mailgun and the campaign-mandrill providers, out the box. Read more about merge variables in Mandrill.

Providers have wildly different merge API in terms of how they want you to give them these recipient-specific variables and how you can reference them in your templates. Campaign helps by providing a reasonable API and then deals with obscure provider data formats under the hood, so you don't have to.

The following example shows merge variables for a couple emails and defaults that are used when a particular recipient doesn't have a value for a given variable.

In your email templates, you can reference these variables simply using {{something}} for values you wish to encode before embedding, and {{{here}}} for embedding raw HTML. Note that this syntax is consistent regardless of whether you're using campaign-mailgun, campaign-mandrill, or something else.

Mailgun, Mandrill and others let you tag your emails so that you can find different campaigns later on. Read more about tagging. By default, emails will be tagged with the template name.

Read about styles below.

There are two types of templates: the layout, and the email's body template. A default layout is provided, so let's talk about the email templates first, and then the layout.

The body template determines what goes in the message body. The options we used to configure our email are also used as the model for the body template, as sometimes it might be useful to include some of that metadata in the model itself.

The API expects an absolute path to the body template.

Other than the options listed above, you can provide any values you want, and then reference those in the template.

The layout has one fundamental requirement in order to be mildly functional, it should have a {{{body}}} in it, so that the actual email's content can be rendered. Luckily the default layout is good enough that you shouldn't need to touch it. If you're building a custom layout, {{{body}}} should be whatever expression is needed to render the unescaped <body> HTML.

Purposely, the layout template isn't passed the full model, but only a subset, containing:

In this case, the _header variable would contain whether a header image was provided. Then, generated contains the moment the email was rendered, passing the 'YYYY/MM/DD HH:mm, UTC Z' format string to moment. Lastly, trapped contains the metadata extracted from the model when trap is set to a truthy value, in the client options.

These are the default styles, and you can override them in the options passed to client.send.

Custom layouts should either abide by these style rule names, or provide entirely new ones.

Here's a perfect use case for merge variables, which were described above in the send options. While many email service providers offer a way to unsubscribe readers, their implementations don't quite align to one another, so we favor using merge variables instead.

The default layout supports an optional unsubscribe_html merge variable, which can be filled out like below. This is rendered in the footer of every email campaign sends out.

Remember, those are supported by Mandrill, Mailgun, and SparkPost, but not every provider supports merge variables. Merge variables are processed after you make a request to their API, with the provider replacing them with the values assigned to each recipient. For more detail on merge variables for each provider you can read these docs:

To help you debug, an alternative provider is available. Set it up like this:

Rather than actually sending emails, you will get a bit of JSON output in your terminal, and the Markdown representation of your email's body HTML. Super useful during development! 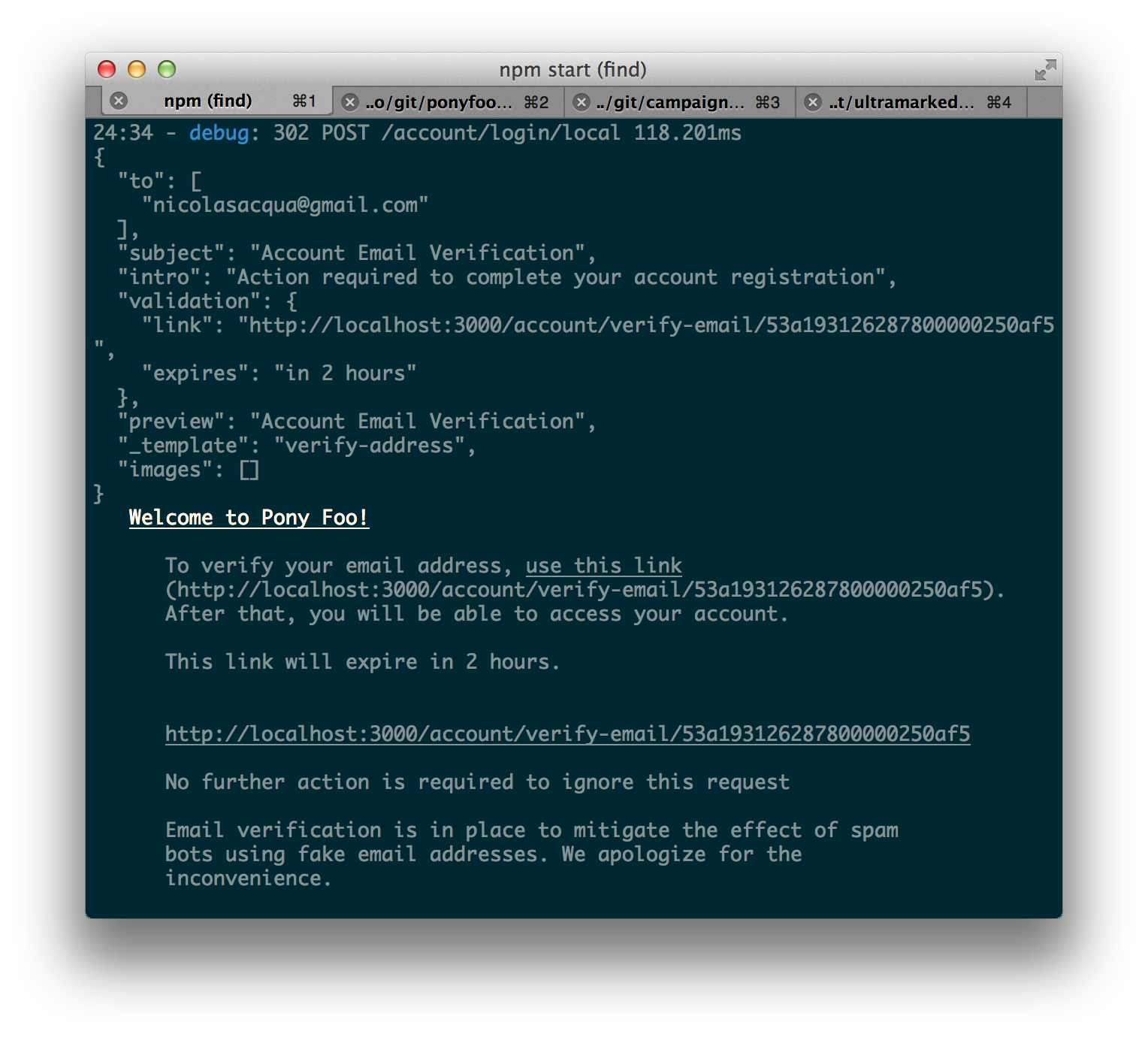 There are a few different providers you can use. The recommended provider is to send emails through campaign-mailgun. There is also a campaign-terminal logging provider, explained above, and a nodemailer provider, detailed below.

If the existing providers don't satisfy your needs, you may provide your own. The provider option just needs to be an object with a send method.

If you decide to go for your own provider, campaign will still prove useful thanks to its templating features, which you can also extend!

The default provider included with campaign allows us to render layouts and views using mustache, but this behavior can be altered to use a custom templating engine.

The done callback takes an error as the first argument, and the resulting HTML as the second argument.

You're welcome to contribute to the development of campaign! Additional template engines and providers would be nice, and I'd encourage creating packages that solely contain that engine or email provider. For instance, you could create campaign-ejs, or campaign-postmark. 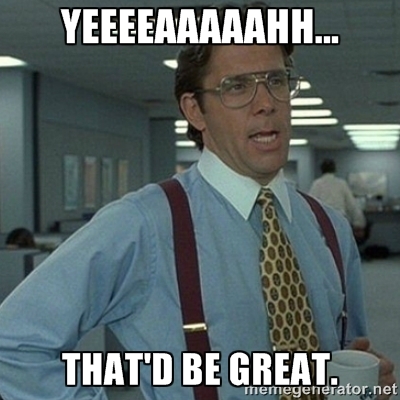 The npm package campaign receives a total of 100 weekly downloads. As such, campaign popularity was classified as limited. Visit the popularity section on Snyk Advisor to see the full health analysis.

Is campaign safe to use?

While scanning the latest version of campaign, we found that a security review is needed. A total of 3 vulnerabilities or license issues were detected. See the full security scan results.

We found indications that campaign is an Inactive project. See the full package health analysis to learn more about the package maintenance status.