Based on project statistics from the GitHub repository for the npm package blunt-instrument-test-resources, we found that it has been starred 9 times.

We found a way for you to contribute to the project! Looks like blunt-instrument-test-resources is missing a Code of Conduct.

Further analysis of the maintenance status of blunt-instrument-test-resources based on released npm versions cadence, the repository activity, and other data points determined that its maintenance is Inactive.

An important project maintenance signal to consider for blunt-instrument-test-resources is that it hasn't seen any new versions released to npm in the past 12 months, and could be considered as a discontinued project, or that which receives low attention from its maintainers.

blunt-instrument-test-resources has more than a single and default latest tag published for the npm package. This means, there may be other tags available for this package, such as next to indicate future releases, or stable to indicate stable releases.

This is a tool for tracing the execution of javascript code. It does not require you to make changes to your source code; instrumentation is automated. The instrumented code will report the value of every expression it evaluates, and other execution details such as the tree of function calls.

This can be used in a few ways: 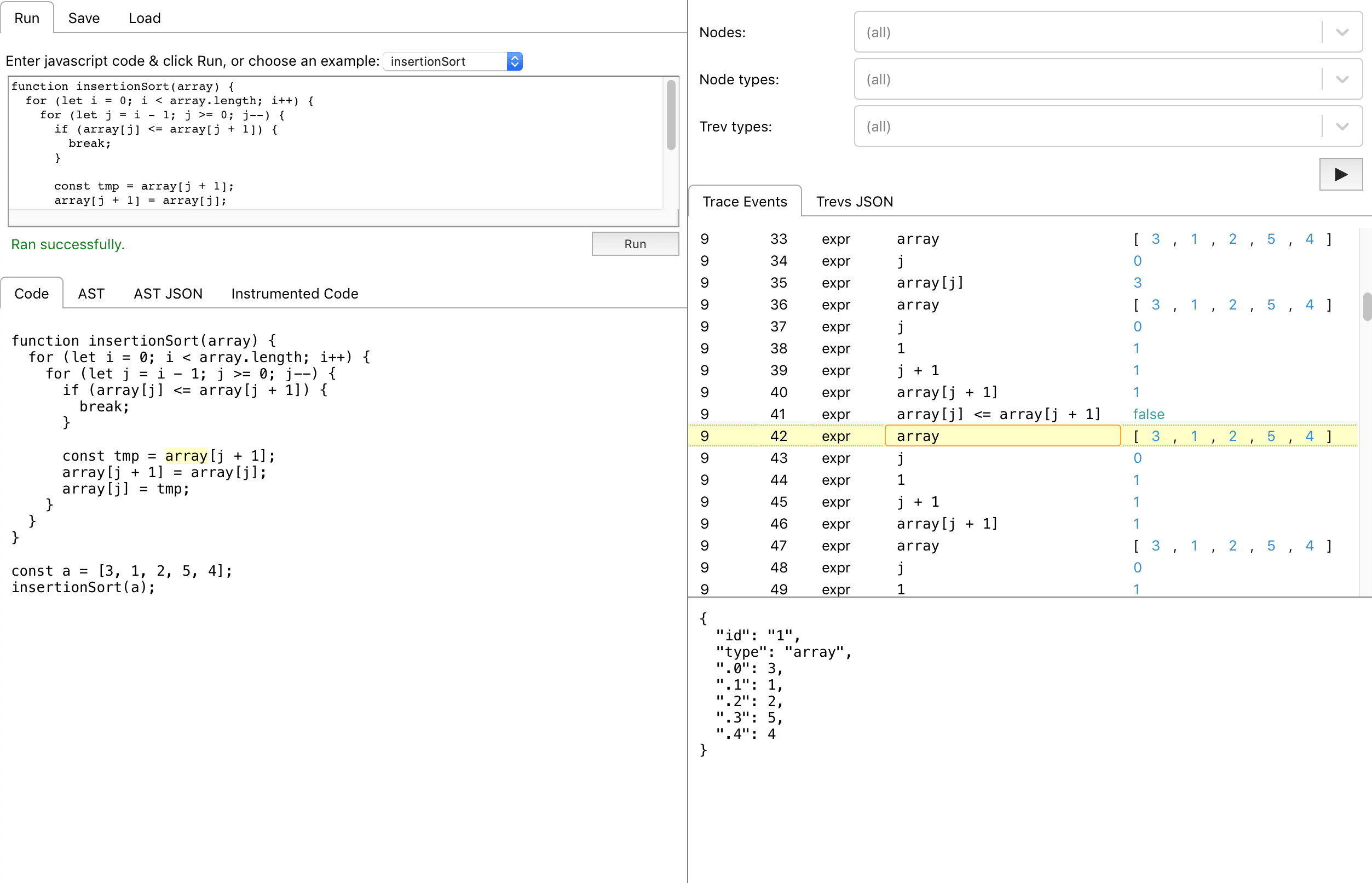 Clone this repo and run npm install to install dependencies, then run npx lerna bootstrap to link the packages together.

This is a multi-package project managed using lerna. Each package is in a subdirectory of the packages folder. Jest and Babel config are at the root and apply to all packages except blunt-instrument-ui, whose babel/webpack/jest config are managed by create-react-app.

Build and test commands can be run from the root directory.

Run npm run build:cjs or npm run build:cjs:watch to build the library packages. You must do this before running tests, and you must rebuild a package before changes to it will affect other packages' tests.

Run npm test or npm run test:watch to run the unit tests. Note: test:watch in the root directory will not run the UI's tests. You can run npm test in packages/blunt-instrument-ui to watch the UI tests.

Some of the snapshot tests are a bit sensitive to the version of Node you're running - for example, in 12.16.0 the name property is present on some functions for which it is missing in 12.13.1. I need a better strategy for dealing with this, but my current aim is to check in the results corresponding to the latest version of Node 12.

Run npm run build to build all packages, including the UI and ESM builds of the libraries.

Bug reports and pull requests are welcome on GitHub at https://github.com/brokensandals/blunt-instrument.

This is available as open source under the terms of the MIT License.

We found indications that blunt-instrument-test-resources is an Inactive project. See the full package health analysis to learn more about the package maintenance status.

Is blunt-instrument-test-resources safe to use?

The npm package blunt-instrument-test-resources was scanned for known vulnerabilities and missing license, and no issues were found. Thus the package was deemed as safe to use. See the full health analysis review.