The npm package avr8js receives a total of 172 downloads a week. As such, we scored avr8js popularity level to be Limited.

Based on project statistics from the GitHub repository for the npm package avr8js, we found that it has been starred 263 times, and that 0 other projects in the ecosystem are dependent on it.

We found a way for you to contribute to the project! Looks like avr8js is missing a Code of Conduct.

Further analysis of the maintenance status of avr8js based on released npm versions cadence, the repository activity, and other data points determined that its maintenance is Healthy.

avr8js has more than a single and default latest tag published for the npm package. This means, there may be other tags available for this package, such as next to indicate future releases, or stable to indicate stable releases.

This is a JavaScript library that implementats the AVR 8-bit architecture.

It's the heart- but not the whole body- of the Arduino simulator at https://wokwi.com.

How to Use This Library

This library only implements the AVR CPU core. You have to supply it pre-compiled machine code to run, and implement functional simulations of any external hardware. You will probably also want to add audio/visual representations of external hardware being simulated.

You may be interested in exploring the wokwi-elements collection of web-components for visual representations of many common hardware components. (Note: these are visual only elements- you will need to add the appropriate functional simulation and glue code.)

A step-by-step video tutorial showing how to build a simple Arduino simulator using AVR8js and React: 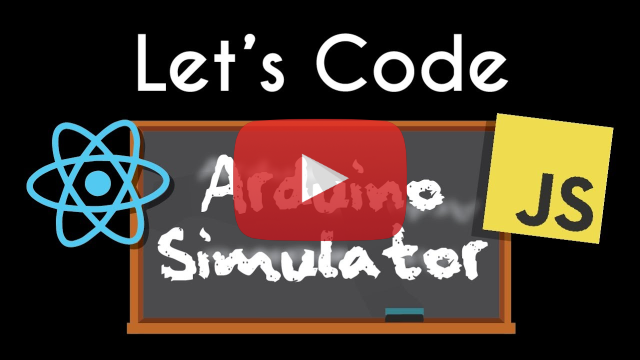 Note: they are all hosted outside of this repo.

The demo project allows you to edit Arduino code, compile it, and run it in the simulator. It also simulates 2 LEDs connected to pins 12 and 13 (PB4 and PB5).

To run the demo project, check out this repository, run npm install and then npm start.

Which chips can be simulated?

The library focuses on simulating the ATmega328p, which is the MCU used by the Arduino Uno.

However, the code is built in a modular way, and is highly configurable, making it possible to simulate many chips from the AVR8 family, such as the ATmega2560 and the ATtiny series:

Check out issue 67 and issue 73 for more information.

Run the tests once:

Run the tests of the files you modified since last commit (watch mode):

The npm package avr8js receives a total of 172 weekly downloads. As such, avr8js popularity was classified as limited. Visit the popularity section on Snyk Advisor to see the full health analysis.

We found that avr8js demonstrated a healthy version release cadence and project activity. It has a community of 6 open source contributors collaborating on the project. See the full package health analysis to learn more about the package maintenance status.

Is avr8js safe to use?

The npm package avr8js was scanned for known vulnerabilities and missing license, and no issues were found. Thus the package was deemed as safe to use. See the full health analysis review.