49 / 100
All security vulnerabilities belong to production dependencies of direct and indirect packages.

Based on project statistics from the GitHub repository for the npm package animated-charts-patch, we found that it has been starred 836 times.

We found a way for you to contribute to the project! Looks like animated-charts-patch is missing a Code of Conduct.

Further analysis of the maintenance status of animated-charts-patch based on released npm versions cadence, the repository activity, and other data points determined that its maintenance is Inactive.

An important project maintenance signal to consider for animated-charts-patch is that it hasn't seen any new versions released to npm in the past 12 months, and could be considered as a discontinued project, or that which receives low attention from its maintainers.

animated-charts-patch has more than a single and default latest tag published for the npm package. This means, there may be other tags available for this package, such as next to indicate future releases, or stable to indicate stable releases.

Set of components and helpers for building complex and beautifully animated charts.

The library was designed to create aesthetic, animated (so far only linear) charts based on a given input. The main assumptions of the library were to create smooth transitions between subsequent data sets. For this reason, we have discovered a shortage of existing libraries related to the charts. The current package was created as part of the Rainbow.me project and for this reason it was not designed as a complete and comprehensive solution for displaying various types of charts. However, we will be now using more charts in the whole application, so we believe that the number of functionalities in the application will gradually grow.

Additionally, we are open to new Pull Requests. We want this library to become popular and complete thanks to community activity.

It's a part of the Rainbow.me project.

The library has been verified with 2.0.0-alpha.6 version of reanimated.

Using TurboModules might have an impact on your current development flow and most likely you don't want to decrease your DX. Since we're not using reanimated in other places in the app, we made some tweaks to disable charts in development mode with compilation macros on iOS. You can find it here

Also, because we're using libraries which currently do not support reanimated 2, we patched exports in reanimated

Furthermore, we found few differences in how the Animated module works with and without TurboModules support, so we made a trick to fallback to the not-TM version of Animated.

Most likely, you don't need any of those patches.

We made a generic example to show briefly what's possible to achieve with this library. A Real-life example is available inside Rainbow!

In order to run an example clone this repo and navigate to Example then:

The library has been designed to provide as much flexibility as possible with the component-based API for easy integration with existing applications.

The code above generates the chart below: 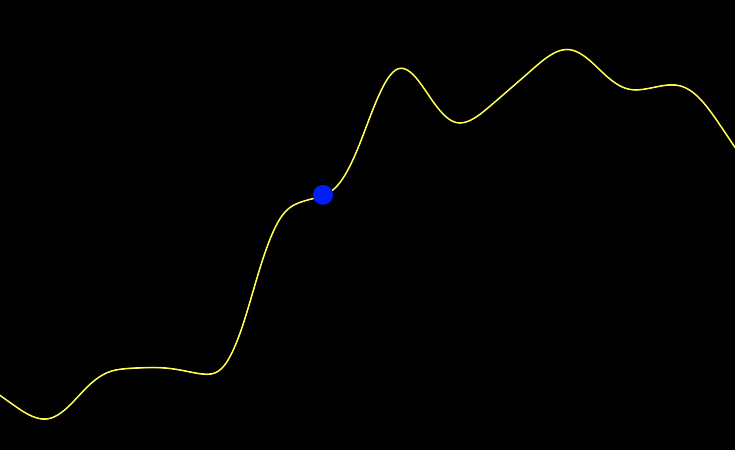 The whole chart's structure has to be wrapped with ChartProvider. It's responsible for data managing and itself does not have a visual impact on the layout. Under the hood, it uses context API to simplify manipulation with other components. The rule is to use one data series for each wrapper. It's important to have it as a separated component because under this component it's possible useChartData hook and put ChartDot component. However, if you don't need those features, you can pass data directly to ChartPath and drop this wrapper.

This component is used for showing the path itself.

Component for displaying the dot for scrubbing on the chart.

Labels are useful while moving finger through the chart to show the exact value in given point.

CurrentPositionVerticalLine is a vertical line moving with user's finger through chart.

OpeningPositionHorizontalLine is a horizontal static line on height of the first point. 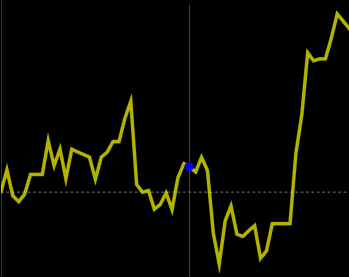 It's not essential in the library, but we have decided to include a lot of helpers we are (or we were) using for displaying charts.

We have two interpolators which share the most of the API: bSplineInterpolation and monotoneCubicInterpolation.

Code above generates 80 equidistant points from given dataset. Generator accepts object of parameters as an argument:

bSplineInterpolation is inspired by victorian lib and uses B-spline interpolation of a given degree.

This curve is inspired by d3 shape. "Produces a cubic spline that preserves monotonicity in y, assuming monotonicity in x, as proposed by Steffen in A simple method for monotonic interpolation in one dimension: “a smooth curve with continuous first-order derivatives that passes through any given set of data points without spurious oscillations. Local extrema can occur only at grid points where they are given by the data, but not in between two adjacent grid points.”

This helper takes only one point per pickRange. Might be useful for very dense data. If it's important, it's possible to include extremes with the includeExtremes flag. E.g.

S – the first and the last points are always included.

It's a bit advanced hook and contains information about current position of dot and corresponding values. Content of the result is changing often, so it's not worth deep documentation now.

The library has been released in a production-ready version. We use it inside the Rainbow.me project so it's verified for use in production. However, it relies on React Native Reanimated 2.0 in the alpha version thus it might not work perfectly. Test it deeply before using it. Until the stable release of Reanimated 2, I think it's worth not marking this library as stable. Although the library works with Reanimated without any changes, we faced a few issues related to our (quite advanced) usage of the library. Thus we made some hacks we're not very proud of and it's for 99% something you should not do. However, if you see some crashes, you may try one of our hacks.

There're a few things left to make it polished regarding linear charts:

The library provides a set of components and helpers for building complex and beautiful animated linear (only - for now... Visit Snyk Advisor to see a full health score report for animated-charts-patch, including popularity, security, maintenance & community analysis.

We found indications that animated-charts-patch is an Inactive project. See the full package health analysis to learn more about the package maintenance status.

Is animated-charts-patch safe to use?

The npm package animated-charts-patch was scanned for known vulnerabilities and missing license, and no issues were found. Thus the package was deemed as safe to use. See the full health analysis review.