The npm package accordance receives a total of 16 downloads a week. As such, we scored accordance popularity level to be Limited.

Based on project statistics from the GitHub repository for the npm package accordance, we found that it has been starred 14 times, and that 0 other projects in the ecosystem are dependent on it.

We found a way for you to contribute to the project! Looks like accordance is missing a Code of Conduct.

Further analysis of the maintenance status of accordance based on released npm versions cadence, the repository activity, and other data points determined that its maintenance is Inactive.

An important project maintenance signal to consider for accordance is that it hasn't seen any new versions released to npm in the past 12 months, and could be considered as a discontinued project, or that which receives low attention from its maintainers.

accordance has more than a single and default latest tag published for the npm package. This means, there may be other tags available for this package, such as next to indicate future releases, or stable to indicate stable releases.

Accordance is a wrapper script around the Unison file synchronizer. What's Unison? The Unison documentation says:

Unison is a file-synchronization tool for OSX, Unix, and Windows. It allows two replicas of a collection of files and directories to be stored on different hosts (or different disks on the same host), modified separately, and then brought up to date by propagating the changes in each replica to the other.

Unison is much like rsync, except that it sync's files bi-directionally instead of unidirectionally. This makes it ideal for use-cases like synchronizing a VCS (like Git) repository's working copy to a remote server during development.

Why do I need this?

While traveling, I typically bring a 12" MacBook to save weight. This machine is perfectly capable of running Sublime Text, but it doesn't have nearly enough RAM or CPU power to run my full development stack (Django Dev Server, Webpack Dev Server, Postgres, Redis, etc all in Docker). Thus, I run all of that on a must faster development server in my office. This is a fairly common pattern in web development: run your editor (Sublime, TextMate, VS Code, etc) and other development tools on your local workstation, but run server software on a remote development server. The question is: how do you share files between the local workstation and the remote server?

There are several ways you could approach this problem.

After trying and being dissatisfied with each of these, I decided to write a tool to make this better: Accordance. 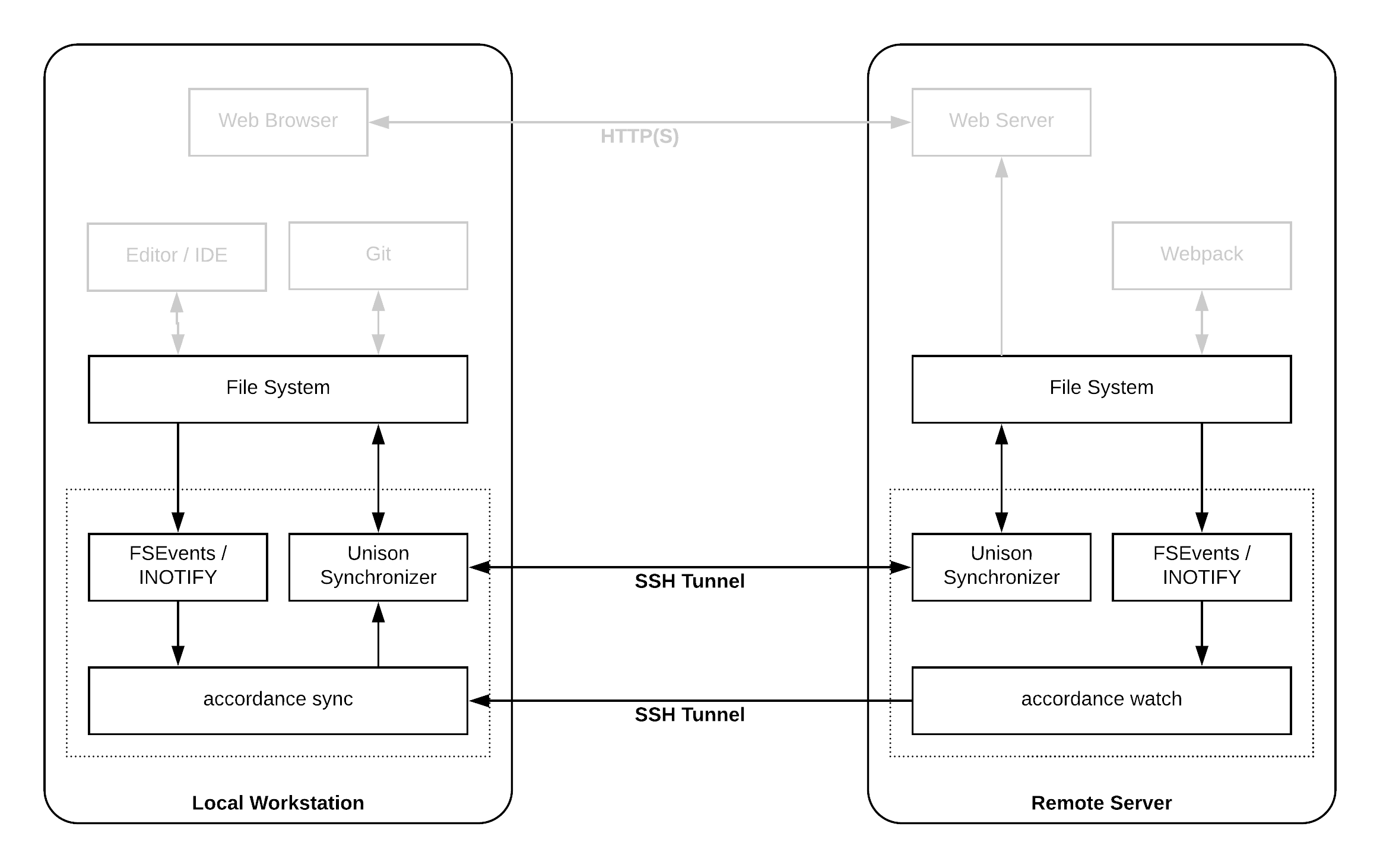 Accordance is a wrapper around Unison. It solves the problem of watching files and triggering syncs. Whether the change happens on the local system (e.g. saving a file in your editor) or on the remote (e.g. creating a new Django migration file), Accordance will detect the change and tell Unison to sync the directory in which the change occurred. This results in a fairly hassle-free background file-synchronizer that performs better (syncs faster) than the alternatives and doesn't break INOTIFY listeners on the remote machine.

First install Unison on both your local workstation and the remote system. On OS X, this can be done using Homebrew:

Note: the same version of Unison should be install on both systems.

Next, if the hostname of either machine ever changes (this is normally only the case for the local system, if it's a portable device like a laptop), add an environment variable to your ~/.bashrc file to set a consistant system hostname for Unison:

Replace MYLOCALSYSTEM with whatever you'd like to call your workstation.

On both systems, install Node.js using the instructions in their installation guide. On OS X, this means:

Then, use NPM to install Accordance as a global package on each system.

Next, create a configuration file to tell accordance what to sync. This file can be placed anywhere, but the convention is to create a .accordance directory in your home folder and store it there. Then, create a YAML file in that folder with the name of the sync profile (this name can be whatever your want, in this example, we'll call it projects).

Here is an example of a the content of the config file:

To start the sync process, run accordance sync form the terminal and pass in the path to your configuration file.

This process will run until your end it with ctrl+c. While it's running it's doing several things:

These limitation are not design decisions, just limitations of the current implementation. They may be improved in future versions of Accordance.

The npm package accordance receives a total of 16 weekly downloads. As such, accordance popularity was classified as limited. Visit the popularity section on Snyk Advisor to see the full health analysis.

We found indications that accordance is an Inactive project. See the full package health analysis to learn more about the package maintenance status.

Is accordance safe to use?

While scanning the latest version of accordance, we found that a security review is needed. A total of 1 vulnerabilities or license issues were detected. See the full security scan results.