The npm package Brosec receives a total of 26 downloads a week. As such, we scored Brosec popularity level to be Limited.

Based on project statistics from the GitHub repository for the npm package Brosec, we found that it has been starred 353 times.

We found a way for you to contribute to the project! Looks like Brosec is missing a Code of Conduct.

Further analysis of the maintenance status of Brosec based on released npm versions cadence, the repository activity, and other data points determined that its maintenance is Inactive.

An important project maintenance signal to consider for Brosec is that it hasn't seen any new versions released to npm in the past 12 months, and could be considered as a discontinued project, or that which receives low attention from its maintainers.

Brosec has more than a single and default latest tag published for the npm package. This means, there may be other tags available for this package, such as next to indicate future releases, or stable to indicate stable releases. 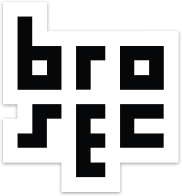 Brosec is a terminal based reference utility designed to help us infosec bros and broettes with useful (yet sometimes complex) payloads and commands that are often used during work as infosec practitioners. An example of one of Brosec's most popular use cases is the ability to generate on the fly reverse shells (python, perl, powershell, etc) that get copied to the clipboard.

Assuming the user has already set up the required variables (see the Getting Started section of the wiki) a reverse shell using the awk command can be generated as easy as...

Or maybe you need to remotely invoke a Powershell script? A download cradle can be generated like so.

Need a quick web server? Forget python SimpleHTTPServer, bros has your back with bros http when entered via the command line. An SSL server? bros https has you covered.

###### [Bros FTP](https://github.com/gabemarshall/Brosec/wiki/bros-ftp) Need to exfiltrate some data via ftp? Bros comes with a handy `bros ftp` when entered via the command line. The ftp server accepts anonymous downloads/uploads from the CWD (so be careful when running).

A encoder/decoder utility designed with penetration testers in mind that often find the need to encode and decode various payloads.

Learn about these features and more on the Brosec wiki.

The preferred method of installation (in order to get all of the latest updates) is to clone the source and install the dependencies manualy (git clone && npm install).

However, a stable build can be quickly installed via the following instructions.

If you have trouble installing, you can also try a compiled copy of Brosec. See Releases.

Submit a pull request, create an issue, or just send feedback to gabemarshall@me.com and I'll happily send you a sticker (supplies limited, free shipping to continental US only).

Otherwise you can order one from StickerMule

Brosec was heavily inspired by the Red Team Field Manual by Ben Clark. In addition, many payloads were referenced from other resources and deserve a shoutout.

The npm package Brosec receives a total of 26 weekly downloads. As such, Brosec popularity was classified as limited. Visit the popularity section on Snyk Advisor to see the full health analysis.

We found indications that Brosec is an Inactive project. See the full package health analysis to learn more about the package maintenance status.

Is Brosec safe to use?

While scanning the latest version of Brosec, we found that a security review is needed. A total of 5 vulnerabilities or license issues were detected. See the full security scan results.