87 / 100
All security vulnerabilities belong to production dependencies of direct and indirect packages.

Based on project statistics from the GitHub repository for the npm package @onflow/config, we found that it has been starred 299 times, and that 4 other projects in the ecosystem are dependent on it.

With more than 10 contributors for the @onflow/config repository, this is possibly a sign for a growing and inviting community.

Further analysis of the maintenance status of @onflow/config based on released npm versions cadence, the repository activity, and other data points determined that its maintenance is Healthy.

@onflow/config has more than a single and default latest tag published for the npm package. This means, there may be other tags available for this package, such as next to indicate future releases, or stable to indicate stable releases.

Note: This repository makes use of ZenHub to track issue dependencies and long term planning. Please follow along here. You will be asked to create a (free) ZenHub account to view.

FCL 1.0.0 has arrived! When upgrading your project, reference the Release Notes for information on how to make your app compatible with its breaking changes.

Connect your dapp to users, their wallets and Flow.

The Flow Client Library (FCL) JS is a package used to interact with user wallets and the Flow blockchain. When using FCL for authentication, dapps are able to support all FCL-compatible wallets on Flow and their users without any custom integrations or changes needed to the dapp code.

It was created to make developing applications that connect to the Flow blockchain easy and secure. It defines a standardized set of communication patterns between wallets, applications, and users that is used to perform a wide variety of actions for your dapp. FCL also offers a full featured SDK and utilities to interact with the Flow blockchain.

While FCL itself is a concept and standard, FCL JS is the javascript implementation of FCL and can be used in both browser and server environments. All functionality for connecting and communicating with wallet providers is restricted to the browser. We also have FCL Swift implementation for iOS, see FCL Swift contributed by @lmcmz.

To use the FCL JS in your application, install using yarn or npm 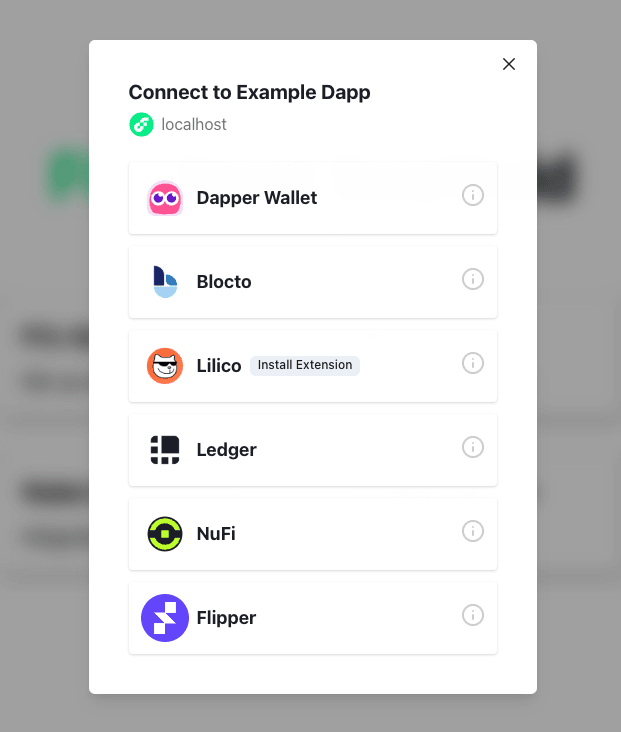 See the full API Reference for all FCL functionality.

Explore all of Flow docs and tools.

Wallet providers on Flow have the flexibility to build their user interactions and UI through a variety of ways:

FCL is agnostic to the communication channel and be configured to create both custodial and non-custodial wallets. This enables users to interact with wallet providers without needing to download an app or extension.

The communication channels involve responding to a set of pre-defined FCL messages to deliver the requested information to the dapp. Implementing a FCL compatible wallet on Flow is as simple as filling in the responses with the appropriate data when FCL requests them. If using any of the front-channel communication methods, FCL also provides a set of wallet utilities to simplify this process.

It can be difficult to get users to discover new wallets on a chain. To solve this, we created a wallet discovery service that can be configured and accessed through FCL to display all available Flow wallet providers to the user. This means:

The discovery feature can be used via API allowing you to customize your own UI or you can use the default UI without any additional configuration.

Note: To get your wallet added to the discovery service, make a PR in fcl-discovery.

Notice an problem or want to request a feature? Add an issue.

Discuss FCL with the community on the forum.

Join the Flow community on Discord to keep up to date and to talk to the team.

The npm package @onflow/config receives a total of 6,156 weekly downloads. As such, @onflow/config popularity was classified as small. Visit the popularity section on Snyk Advisor to see the full health analysis.

We found that @onflow/config demonstrated a healthy version release cadence and project activity. It has a community of 70 open source contributors collaborating on the project. See the full package health analysis to learn more about the package maintenance status.

Is @onflow/config safe to use?

The npm package @onflow/config was scanned for known vulnerabilities and missing license, and no issues were found. Thus the package was deemed as safe to use. See the full health analysis review.